Radley Metzger's "The Lickerish Quartet" is too good for its own good, which makes it very little good at all as a skin flick. To explain. This is a very ambitious movie, by a skin flick director whose recent work ("Therese and Isabelle." "Camille 2000," "Carmen Baby") has exhibited steadily improving technical virtuosity and casting.

Metzger's movies have a certain visual sheen that is pleasant to experience, and, his girls are nice to look at. But when he gets serious, he's making a mistake.

The movie begins in one of Metzger's favorite settings, the decadent home of wealthy European aristocrats. The father, the mother and the son are watching a stag movie. Then they go out to a carnival and see a girl on a motorcycle who appears to be the girl in the film.

They bring her home and show the film again, but it has mysteriously changed in the projector, and you can't see the girl's face.

Then, let's see, the girl turns out to be the same girl after all, and seduces the husband (in a funny scene in a library) and the film changes so that now it's about how the husband met the wife during the war, when he was a soldier and she was a prostitute. Are you following all this? Meanwhile, the girl and the son make love, and then the girl and the woman get together, but then the girl goes back into the stag film and the person in the woman's arms turns into her husband, after which two OTHER couples watch a stag film which stars the original four characters.

By this point, Mike Royko's friend Slats Grobnick would be squirming in his seat and wondering who told him this was a skin flick. He'd have company. The movie isn't good enough to succeed on the level of its ambition, and it doesn't even try to succeed as a skin flick. So why see it? 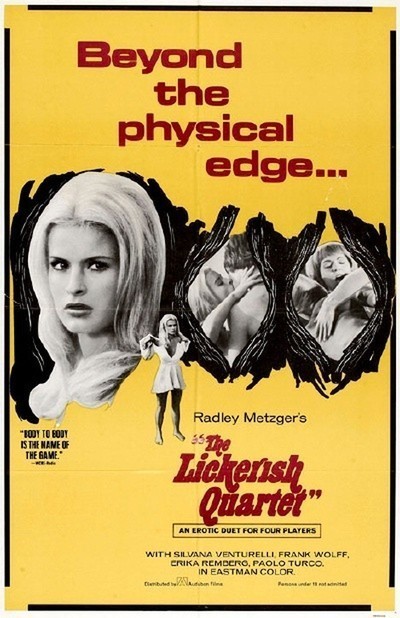 Silvana Venturelli as The girl

Paolo Turco as The boy

Frank Wolff as The man

Erika Remberg as The woman