The pieces are all there, but they never really snap into place in “The LEGO Ninjago Movie.”

The feature-film version of the long-running animated TV series “Ninjago: Masters of Spinjitzu” only superficially resembles its source material, and it pales in comparison to its cinematic predecessors. Maybe such diminishing returns were inevitable. It would be impossible to recreate the groundbreaking, lightning-in-a-bottle innovation of 2014’s “The Lego Movie.” We saw that earlier this year with the release of “The Lego Batman Movie,” which was consistently zippy and amusing but, inevitably, not quite as novel.

Now we have “The LEGO Ninjago Movie,” about a group of teenagers who are secretly ninjas, each with a special elemental power. Their challenge is to take on the evil Lord Garmadon (voiced by Justin Theroux), who also happens to be the father of the team’s Green Ninja, Lloyd (Dave Franco). But while the film is credited to three directors (Charlie Bean, Paul Fisher and Bob Logan) and a small army of writers, it results in only a few clever ideas that are chuckle-worthy, at best.

Its strongest bit is the introduction of a live-action cat within this animated setting—dubbed Meowthra in an homage to classic, Japanese movie monsters—who terrorizes Ninjago City when she’s accidentally summoned with a red laser pointer. But the enjoyment of the absurd sight of a cat knocking over Lego buildings lasts about as long as your average viral video—and then you’re stuck realizing how little there is to the script.

Part of the problem is that “The LEGO Ninjago Movie” is primarily about Lloyd struggling with his daddy issues and Garmadon trying to figure out whether and how to be a father to Lloyd, whom he hasn’t seen since the boy’s infancy. And aside from Lloyd, the other ninjas are essentially interchangeable, which is a huge departure from the television show. (I have a son who’s almost eight. We watch a lot of “Ninjago” in this house. Ask me anything.) The supporting players’ names and nature-related abilities are all the same—water, lightning, fire, etc.—but they have no discerning personalities beyond that. They are background noise. They are filler.

What’s so bizarre about that is that the longtime voice performers from the TV series—who’ve been playing these characters for seven seasons now—have all been replaced with better-known actors and comedians, who then get surprisingly little to do. Nothing against them—they’re all great and they’re solid voice talent, people you’re happy to see whether they appear in TV or film—but they’re not given enough material to justify overhauling the entire cast. The shift seems like a cynical ploy to make the movie more marketable.

“LEGO Ninjago” also suffers from its live-action bookend narrative structure, featuring Chan as a store owner who tells the legend of Ninjago to a wide-eyed kid. All that does is explain the presence of the cat and it gets the film’s pacing off to a sluggish start from which it never fully recovers.

What it could have used more of was world-building, literally and figuratively. What makes this place different from every other? What makes it better than the world of “The Lego Movie,” where everything was awesome? That movie efficiently and effectively laid out its parameters and characters. This one drops you in—so if you don’t know the show, you’ll have no connection to this setting. Having said that, if you’re a fan of the show, you’ll be struck by how little the movie has in common with it.

Despite the grander scale (and bigger budget), the movie doesn’t use the Legos for the thing that makes them fun: the building aspect of them, the possibility of creativity, the way they allow you to push boundaries and come up with structures and characters that maybe don’t make any sense, but they’re cool-looking. “LEGO Ninjago” is essentially an ordinary animated film, with visuals rendered in Lego form.

And sometimes the visuals are so garbled, this may as well be a “Transformers” movie, especially as the ninjas climb inside their various mecha to fly/climb/fight/etc. against Garmadon to keep him from destroying Ninjago City. Along those lines, the sound mix often made it hard to hear the quips, one-liners and banter, especially during the big action sequences, of which there are many. Then again, the jokes and the energy as a whole lack the infectious nature of previous Lego movies.

Since we’re making all the inevitable comparisons, it’s hard to shake the sensation that Theroux is essentially doing Will Arnett doing Batman in the previous two Lego movies. He brings an amusing buffoonery to this alleged super-villain—a clueless bravado, a total lack of self-awareness—but we’ve heard this shtick before. Even the husky swagger of Theroux’s delivery recalls Arnett’s performances, and it serves as yet another reminder of how superior the predecessors were.

And as my son pointed out after a screening of the film (between bursts of singing the TV show’s insanely catchy theme song) the ninjas don’t even do spinjitzu, their stylized martial-arts technique using their signature elemental powers. Not really—not until the end. But maybe we’ll see more of that in the sequel, which is certainly on the horizon, whether it’s merited or not. 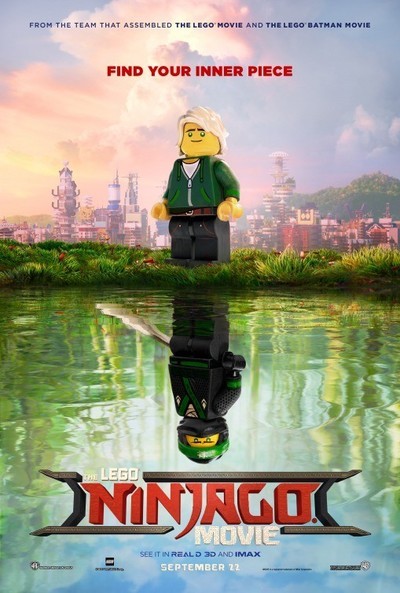 Rated PG for some mild action and rude humor.