The Legend of Cocaine Island

It strikes me that “The Legend of Cocaine Island” is being released on Netflix the same day that Harmony Korine’s Miami-based film “The Beach Bum” hits theaters. This is a very Florida story, the kind of tall tale that Matthew McConaughey’s Moondog might tell after a few bong hits and Coronas. But Hyden’s unexpected dabbling in the drug trade can’t quite maintain our interest for the length of a film’s running time, so director Theo Love tries to amplify the tale with as many true crime filmmaking effects as possible—slo-mo, overuse of music, recreations, repetitive interviews. Kind of like its subject, one wishes the film about him made a few smarter decisions.

"The Legend of Cocaine Island" feels like the kind of story that only could have gone down quite this way in the state that gave us “Florida Man.” Robert Hyden was on top of the world as a Florida businessman before the recession hit. He went from living in a mansion to a double wide no bigger than what used to be his garage. And he was mad. He didn’t deserve this. As he was looking at the bad hand life had dealt him, he heard a great urban legend repeated. There was a guy walking the beach in Puerto Rico one day and he saw a bag floating in the shallow water. He brought it in to shore, unzipped, and found millions of dollars in cocaine. With the corrupt police force of Puerto Rico and no way to get it out, he buried it. Basically, there was a buried treasure of millions of dollars in drugs just waiting for someone to find it. And it wouldn’t be that hard to find exactly where to dig.

And so that’s what Hyden planned to do. He didn’t tell his wife, and he dove into an underworld of seedy characters, including his very own Jesse Pinkman to go down with him to get the drugs, someone up in Florida to sell them, and even a high-powered mobster to get him a private plane to transport the coke. Even today, Hyden seems enlivened by the wacky adventure aspect of it all, excitedly talking about what he tried to do as if he’s watching a movie about it instead of actually living it. He’s the kind of character who talks about how much he loves the movie “Scarface” while recounting how he entered the violent world of cocaine trafficking.

You probably have some questions about now. How is this guy still alive? Wouldn’t the people he trusted just take the drugs from him? Are we supposed to be rooting for someone who dug up dozens of kilos of cocaine to put them into the American drug trade? It’s a complex prospect tonally to tell the story of someone trying to commit a pretty serious crime. And “The Legend of Cocaine Island” has a few twists and turns up its sleeve that I certainly didn’t see coming, leading to a final act with a few complex moral gray areas.

The gray areas are fine—Love clearly likes Robert Hyden and sides with him in terms of the risks he was willing to take to provide for his family—but the production of “The Legend of Cocaine Island” is more frustrating than its subject’s complex morality. If there was another slo-mo shot of someone unzipping a bag, I might have screamed. And the music and style choices couldn’t be more in your face, from a guitar version of the National Anthem to our new National Anthem, “Nobody Speak” by Run the Jewels. Most of all, one can’t shake the feeling that all of these tools are merely ways to disguise that there’s not quite a movie’s worth of story to tell here. It’s the kind of tale better told on a steamy night at a beachside bar, amplified by the sunstroke and cheap beer buzz from the day. Moondog would love it. 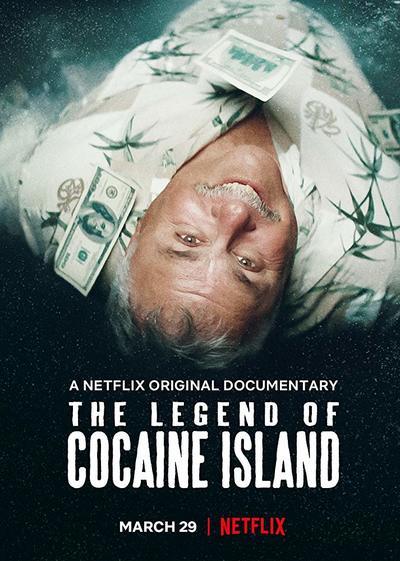