The Last Man on the Moon

This is one of those impressionistic documentaries. It begins at a rodeo. You’re supposed to think, “Hey, why is this documentary about an astronaut opening at a rodeo?” The film keeps focus on a bronco rider preparing, and also on a distinguished looking older man who’s watching the exhibition. The bucking bronco gallops out, rider hanging on for dear life, and the film cuts to the older man, who’s concentrating hard on the bronc, and then it cuts to a shot of a zero-g simulator capsule and now the viewer is supposed to be like, “A-ha! That fellow watching the rodeo is the astronaut and the bucking bronco is making him remember that,” and aw yeah, etcetera, etcetera.

As you may have inferred this is not my favorite kind of documentary filmmaking. Eugene “Gene” Cernan, the subject of this film, who’s also the older fellow watching the bucking bronco, is a man deserving of a tribute such as this movie aspires to give him. The filmmakers, attempting to jazz up their material, get in the way a lot.

In a sense I understand why. NASA, and particularly the Apollo program, has been the subject of an awful lot of movies and television shows, some fictional, some documentary, some hybrid. If one is making a film about an Apollo astronaut at this late date, you might want to add more zip. Unfortunately director Mark Craig’s idea of adding zip is to roll out tropes and conventions that the real-men-in-space sub-genre has pretty much already beaten to death. The “Forrest Gump”-influenced song soundtrack, for instance, with doo-wop in the ‘50s and “Signs” (the original!) playing over stock footage of, yup, carpet-bombing in Southeast Asia. (The non-song soundtrack, meanwhile, by Lorne Balfe, initially comes off like Brian Eno and Daniel Lanois’ music for “Apollo” reconfigured for a Michael Bay picture.)

Cernan’s story is damned interesting, too. Born and raised on a farm that had no electricity, he grew up to be both an astronaut on Apollo 10, the advance mission that laid the groundwork for Apollo 11, and then on Apollo 17, the final manned moon mission. So his career encompasses pretty much the entirety of the moon program, on that’s been treated in the likes of “The Right Stuff” and “From The Earth To The Moon.” A lot of Cernan’s bearing and attitude squares with that of the stolid, stoic characters we met in those movies and shows. But when he waxes philosophical he shows a side I wish the movie had explored further. Describing his climb up the ladder back to the lunar module as he was getting ready to leave the moon, he says, “I looked over my shoulder and there’s the earth. There’s reality. There’s home.” The idea that his time on the moon constituted something that he considered not “reality” is fascinating, and I understand it. But I understand it to the extent that if I were in some sort of flying craft and I was made acutely aware that I was no longer ON EARTH, I would totally freak out. Whereas for Cernan, he’s spent his whole life training for an eventuality that he would be spending some time headed toward and walking around on a body of land that was NOT EARTH. That’s totally messed up, right? Well, I think so. I wish this movie had gotten a little more into that. Rather than, you know, taken really beautiful NASA footage of capsules uncoupling in space and intercutting them with shots of Cernan sitting in his living room, on a lounger or some such thing, and we’re supposed to think he’s closing his eyes and remembering. 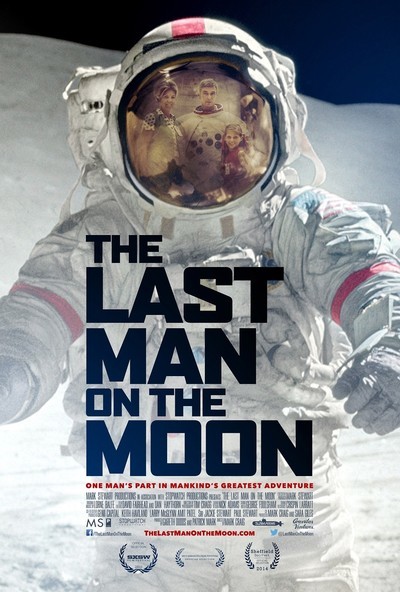