The Last Flight of Noah's Ark

Walt Disney's "The Last Flight of Noah's Ark" is a dreadful movie, bankrupt of creative imagination-an Identi-kit film, assembled from familiar pieces but with no identity of its own. It's so depressingly predictable that in the last half hour we're sitting there thinking: Let's see ... the raft has put out to sea, so there has to be at least one shark attack and one bad storm before they're rescued. There are.

What's most discouraging about the film is that, with its G rating and Disney trademark, it will no doubt draw large audiences of children. Parents know Disney movies are OK to send the kids to because there won't be any nudity or profanity. But isn't it also poisonous for kids to be exposed to stupid characters, lame-brained plots and humorless "gags?" To a movie lacking the sense of excitement, invention and fun that children's movies should have above all else? Isn't it damaging to expose a child to two hours of dreck?

Going to the movies should be a wonderful, challenging adventure, filled with inspiration for marvelous fantasies. If I was a kid and I thought "The Last Flight of Noah's Ark" was what I'd find at the movies, I'd be so turned off I'd never go. But do today's kids even know how stimulating the movies can be? If they've had a chance to see "The Black Stallion" they do-and "The Black Stallion" has returned to local theaters this week.

But back to "Noah's Ark." The plot could possibly have led to a much better movie. It's about how pilot Elliott Gould is hired by missionary Genevieve Bujold to pilot a decrepit old B-26 to a Pacific island, where she hopes to start a missionary colony. The plane is loaded with breeding animals, and, of course, with two pint-sized stowaways (Ricky Schroder of "The Champ" and Tammy Lauren of TV's "Angie"). The plane crash-lands on an unmapped island, the survivors run Into two Japanese soldiers who think World War 11 is still being fought, and everybody pitches in to turn the top half of the airplane shell into a raft (thus Maurice Jarre's obnoxiously Insipid song "Half of Me," which is sung twice to no avail).

If any effort had been made to explore the possible realities of this situation, the movie might have been more absorbing. But no. The Japanese are turned into offensive cartoon stereotypes, the kids go swimming, and between Gould and Bujold there springs up one of those Disney relationships that consist of fighting a lot and then suddenly falling into romanticized respect, interrupted by chaste kisses.

There are no high points to the movie, but there is a real low point at the end. The raft is launched, it floats for an undetermined number of days, and then our heroes are rescued by the U.S. Coast Guard! Therefore, they must have floated into U.S. coastal waters. Therefore, they floated halfway across the Pacific and the movie hasn't even gotten excited about it. This movie isn't just boring, it's bored. 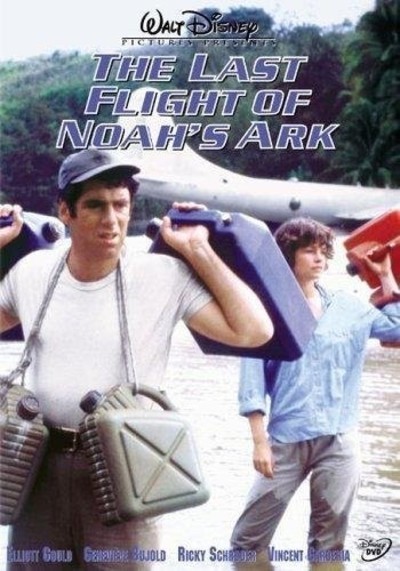