Sean Penn turns African strife into a two-hour perfume commercial with “The Last Face,” veering between gauzy impressionism and shrieky melodrama with his latest directorial effort.

Penn’s own humanitarian work is well-documented, including raising millions of dollars for Haitian relief efforts. Clearly, his intentions here are genuine. But his execution is laughably pretentious, crammed as it is with dramatic lighting, repeated use of artful slow motion and wailing vocals, including some from longtime pal Eddie Vedder.

“The Last Face” shines a light on the plight of war-torn lands like Liberia and South Sudan, a topic most moviegoers probably don’t want to think about. It’s too far away, too daunting, too unpleasant. But Penn ultimately fetishizes such suffering, making it self-consciously beautiful through hand-held camerawork, off-kilter angles, extreme close-ups of eyes and fingers and glittering lens flares. Meanwhile, the Africans themselves fade into the background, rendered less as individuals than types: proud fathers, strong mothers and adorable children, all photogenic.

Because the real story at the film’s center is a romance between gorgeous people with big hearts and a taste for danger: Charlize Theron as the determined director of an international aid agency and Javier Bardem as a roguish, globetrotting doctor. Erin Dignam’s script hops around in time and place, tracing the couple’s star-crossed courtship over the course of a decade and various countries. But while Theron is saddled with breathy narration spelling out how she feels about everything, all the time (“Before I met Miguel, I was an idea I had. I didn’t really exist.”), the film as a whole doesn’t seem particularly interested in examining why this region of the world is ravaged.

Instead, we get a close-up of Bardem’s Dr. Miguel Leon washing his filthy feet in a sink, which dissolves into a slow-motion shot of a helicopter flying over a devastated refugee camp. As Dr. Wren Petersen, Theron appears at the film’s start on stage at a glitzy charity dinner, appealing to wealthy donors in a slinky black dress. Then the film cuts abruptly to the events of 10 days earlier: gun fighting and carnage, with a blood-soaked Miguel tending to victims who were caught in the crossfire. Despite Wren’s frequent, hand-holding voiceover, the story’s many temporal leaps often result in confusion.

Eventually, we see how the two fell in love back in 2003, flirting with each other at a Sierra Leone refugee camp with giggly tooth brushing serving as foreplay. “Are you a playboy, Miguel?” Wren asks playfully. And then it’s back to the artful squalor.

But the core of “The Last Face” is, ostensibly, a mystery: What happened to this couple who fell in love quickly, passionately and ill-advisedly? What tore them apart, leaving Wren lying in bed with depression for three days (but still looking stylishly tousled)? And, more crucially, can you bring yourself to care?

The rift may have something to do with the fact that Wren used to toil away in the trenches and is now buttoned-down in the boardroom. “Saving lives is a serious mission,” she tells members of the United Nations Human Rights Council in Geneva—and us, as well, as if we didn’t know.

To reinforce that point, Penn’s imagery can indeed be harrowing: a pile of bloody boys’ bodies with flies buzzing all about them or a woman who lost her legs at the knees, lying in a cot, asking whether her daughter survived. But even during the film’s most stressful moments—including, most awkwardly, an emergency C-section in the middle of nowhere in the middle of the night—“The Last Face” finds a way to wedge in a sense of romance. And a potential subplot involving Adele Exarchopoulos as a longtime aid worker whose history is entwined with both Wren’s and Miguel’s feels half-baked.

Ultimately, at the end of this overlong slog, “The Last Face” returns to the fancy fundraiser where it began. Wren tearfully tells the well-heeled crowd about refugees, “They are us,” and their dreams are as fundamental as breathing air. Then she strides off stage to the feel-good strains of “Peace Train.”

In this moment, Theron reminds us who she is: a glamorous movie star. It's one final, glaring example of the film's unfortunate penchant for style over substance. 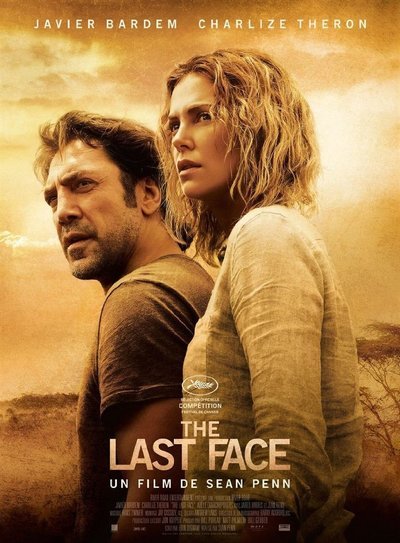