I mention the scene so prominently because it's one of the few scenes that really work in "The Hunger," a movie that has been so ruthlessly overproduced that it's all flash and style and no story. Well, there's probably a story moping about somewhere within all the set decoration. It seems to involve Deneuve as a vampire of vaguely Egyptian origins, whose latest partner (David Bowie) is giving out on her after three or four centuries.

Well, he doesn't but it's about the only time in the whole movie there aren't curtains blowing in the wind. This movie has so much would-be elegance and visual class that it never quite happens as a dramatic event. There's so much crosscutting, so many memories, so many apparent flashbacks, that the real drama is lost -- the drama of a living human being seduced into vampirism.

In Herzog's "Nosferatu the Vampyre," we felt some of the blood-scented lure of eternal death-in-life. Here it's just -- how would an ad put it? -- "Catherine Deneuve for Dracula." 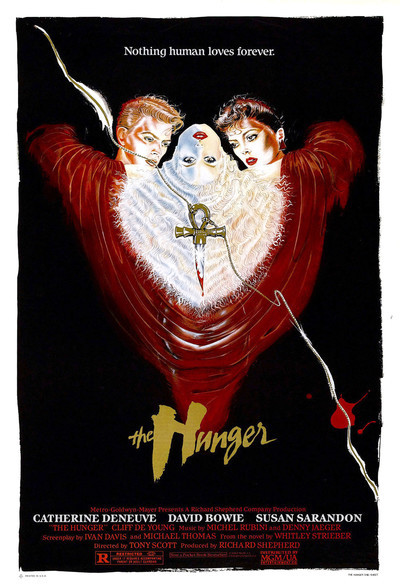