What a strange bird this movie is. The title “The Hummingbird Project” refers to the millisecond it takes for a hummingbird’s wing to beat one time, I think. Or maybe it hints at the future home that coder Anton Zaleski (Alexander Skarsgård) dreams about, a domicile where the little birdies flit outside with impunity. If I waxed less poetically, I’d venture that it’s the name of the fiber optic cable-building job Anton’s cousin Vincent (Jesse Eisenberg) is hell bent on completing. This would give his trading company an infinitesimal yet crucial timing edge over other traders.

Whatever it is, I’m pretty sure you won’t care as much as the characters in writer/director Kim Nguyen’s tonally confused feature do. This one works overtime, shifting gears repeatedly without once providing enough substance for the viewer to engage. It keeps trying on new genre outfits like an undecided shopper—here’s a comedic element, now here’s some thriller crumbs, and oh yes, a tragic illness for good measure! Far more gonzo movies have worked just fine in this manner, but ask yourself if you’d inherently give one iota of a damn about two guys who want to run one thousand miles of fiber optic cable so they can upstage the impossible-to-upstage Salma Hayek. Unless you have a Verizon Fios fetish, this might be rough going.

“The Hummingbird Project” never lets us know how we’re supposed to feel about these characters and their quest. Eisenberg is in “The Social Network” mode: obnoxious and completely devoid of any audience sympathy. Thankfully, he’s very good at that, but to what end? He's often mean to Anton, who’s possibly on the spectrum. He yells at Amish people and forsakes his own health for his obsession. Now, many a great piece of art has been made about doomed men enmeshed in their fixations—Ahab had his whale and Fitzcarraldo had his steamship. Vincent has his millisecond, and not a bunch of them, either. Just one millisecond. Granted, there’s a lot of money to be obtained with that millisecond, but from a dramatic standpoint, it’s a very dry concept. And this is a computer guy talking here.

The year is 2011 and Eva Torres (Salma Hayek) is a tough-as-nails power broker whose High Frequency Trading desk hires only the best traders and programmers. Anton and Vincent represent the crème-de-la-crème, so Torres is far from pleased when they decide to abruptly quit. Unbeknownst to Torres, the duo, along with drilling expert Mark (Michael Mando), have obtained seemingly bottomless financing to lay cable from Kansas to New Jersey in an attempt to get data quicker than Torres can. This project appears to be doomed from the start: even if they manage to drill from Dorothy Gale’s pre-Oz location through the Appalachians and into my beloved home state, the data won’t go through any faster unless Anton can make his code run one millisecond faster.

We’ve arrived at the part of the film that plays a bit like farce. Outside of those aforementioned zealous Amish guys, people are more than willing to allow a strange, snooty nerd to drill on their property. He does pay well, so there’s that. But some of the other ways Vincent gets around topographical and geographical issues come off way too easily. There’s no suspense, and since nobody’s willing to do a deep dive into process (and risk making this even more dull for the regular viewer), we don’t feel what’s at stake.

Meanwhile, in the thriller aisle of this supermarket of a movie, mean ol’ Ms. Hayek shows up every so often to threaten Anton about using his lines of code to do Vincent’s bidding. Since he wrote the algorithm for her, it’s now her intellectual property. She has a case for sure, but it’ll be pretty damn hard for her to prove without a printout or one hell of a detailed MRI of Anton’s brain.

But I digress. Torres keeps showing up like a smokin’ hot Freddy Krueger, christening Anton with droplets of water while he’s in his hot tub and mocking her rivals with graffiti about milliseconds written on rocks deep in the woods. As convincing as Hayek is, she’s completely wasted with her minimal screen time.

Though Nguyen is the only credited writer here, “The Hummingbird Project” feels like one of those movies where nine different people contributed to the proceedings without reading what anybody else wrote. I was ready to check out once we got to the major grab for sympathy (complete with hospital visit) that closes out the film. It’s a shame because the acting is quite good here, especially an against-type Skarsgård. His Anton is rather complex and he gets one hell of a celebratory dance sequence. I identified with his little boogie-woogie; finally someone put onscreen what it feels like when your code does what it’s supposed to do. 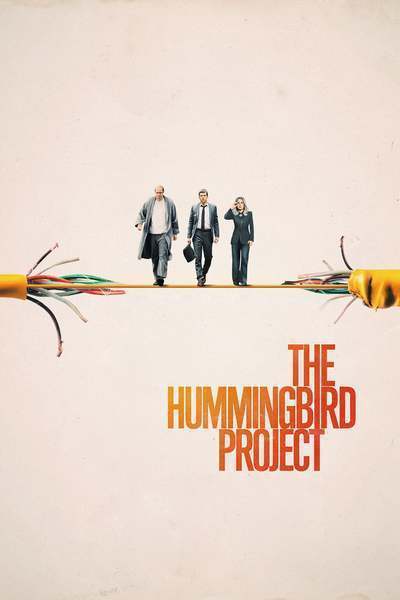