The Hobbit: The Battle of the Five Armies

"So began a battle that none had expected; and it was called The Battle of the Five Armies, and it was very terrible." -J.R.R. Tolkien, "The Hobbit"

The "very terrible" battle takes up only one chapter in Tolkien's novel and is the majority of the action in Peter Jackson's final entry in "The Hobbit" trilogy. It's a stunner of a sequence, although it also illuminates the flawed logic of stretching out Tolkien's book into three installments. What is the real story? How do we get from A to B? And, crucially, why do we care?

And where is Bilbo Baggins in all of it? The novel is concise, humorous, with a dark periphery, and even in the midst of extremely tense moments, we have Bilbo, a tut-tutting little homebody, wondering how the heck he got involved in all of this nonsense in the first place. There's not enough Bilbo in "The Battle of the Five Armies." The story misses his presence. The film's first mildly humorous moment, a line reading from Martin Freeman, comes almost 40 minutes in, and it's refreshing, but it highlights the humorlessness of the rest. There are some wonderful sequences in "Battle of the Five Armies", and the attention to detail is breathtaking (each different space rendered with thrilling complexity), but the film feels more like a long drawn-out closing paragraph rather than (like "The Desolation of Smaug") a vibrant stand-alone piece of the story.

"The Battle of the Five Armies" picks up where "Desolation of Smaug" left off: Smaug the dragon (voiced by Benedict Cumberbatch) has burst free into the air, and descends onto the helpless people of Laketown in a blitzkrieg of fire. Bard (Luke Evans) becomes the natural leader of the traumatized refugees, who straggle around dazed at the destruction of their homes. An endless line of devastated people trail up the dizzying slopes towards the Lonely Mountain, where they hope to receive compensation for all they have lost. Meanwhile, the Dwarf contingency, along with Bilbo, hole themselves up in the Mountain, protecting the treasure, most of the dwarves uneasy about the increasingly paranoid leadership of Thorin (Richard Armitage).

Christopher Lee and Cate Blanchett return, briefly, for a psychedelic scene of mortal combat with the ring wraiths that doesn't seem to have much to do with anything (although it is clearly supposed to be important), and Gandalf (Ian McKellan) returns from imprisonment to the field of battle. Tauriel the elf (Evangeline Lilly) is not given much to do, except love a dwarf, a big no-no in her world. She speaks about love repeatedly, softly and wondrously, and every time she does the entire film deflates en masse. Romantic love has nothing to do with the story overall, and the love subplot feels so obligatory that it's practically condescending.

The real story is about greed, what Tolkien termed "dragon-sickness," and when Jackson focuses on that aspect, "Battle of the Five Armies" finds its footing. It's a strong theme, Shakespearean in scope, perfectly exemplified in one nightmare sequence in which Thorin, lost to "dragon-sickness," greedy and jumpy, finds himself sucked into a monstrous whirlpool of thick molten gold. Everyone who has read the book knows that Thorin loses it once he has the gold under his care, but Jackson imagined it in a way that is surreal and visceral.

When the battle finally comes, it is tremendous. Armies swoop towards one another across a vast plain, each group displaying their own intricate maneuvers and battle strategies, wielding their own specific weaponry, making one think it could be a deleted scene from John Woo's "Red Cliff," or that a fussy Middle Earth equivalent of John Keegan had been a consultant on the film, providing information on how the dwarf infantry worked, and how the elves moved in formation. The sequence is an enormous pantomime of carnage that somehow maintains its sense of spatial relations and emotional tension (there is a terrific standoff between Thorin and the head Orc on a sheet of ice near a treacherous frozen waterfall).

Peter Jackson has devoted an enormous part of his life to the creation of these films, and taken all together they are a major accomplishment. "The Hobbit" may have been better served by being a single film: by forcing the action to be condensed into a single through-line, the storytelling would have more urgency, there would be less room for any "fat" on the story, there would be no detraction from its overall themes. The world-building aspect of the films is thrilling, and there are spaces created in all three of "The Hobbit" films that are unforgettable.

But that magic something is missing in "Battle." There are glimpses of it, glimpses of true poignancy and emotion: the friendship between Thorin and Bilbo, Bilbo turning back to look at the row of dwarves standing in the doorway, the last conversation with Gandalf, and the final moment of the film. These moments are lovely; these moments are presented concisely, strongly and openly. There, there is the story.

Tolkien understood the appeal of home, of a nice pipe and a cozy fire, of being surrounded by those who know you, where life is safe and your role is set. Bilbo Baggins is thrust out of his comfort zone, and must come up with the goods in extraordinary circumstances. Frodo had the same role in the "Lord of the Rings" trilogy. These journeys are epic, and yet they are grounded in those homey details that make us understand and sympathize. Hobbits are constantly underestimated. They underestimate themselves. Tolkien's work taps into a great universal anxiety: would I be up to a similar task? How would I fare if I were called? Would I be brave? Or would I cave? At its best, Jackson's films dig into those questions. "The Desolation of Smaug," part two in the trilogy, which this reviewer loved, is the strongest of the three films, because it never forgets that at the heart of it is a small creature who is overwhelmed by fear, and yet who must be brave anyway. 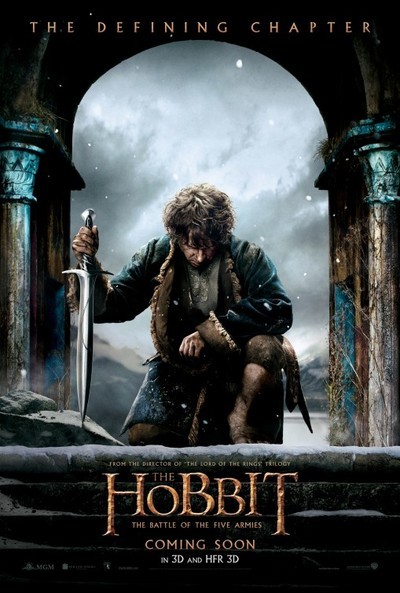 Benedict Cumberbatch as The Necromancer