"The Graduate," the funniest American comedy of the year, is inspired by the free spirit which the young British directors have brought into their movies. It is funny, not because of sight gags and punch lines and other tired rubbish, but because it has a point of view. That is to say, it is against something. Comedy is naturally subversive, no matter what Doris Day thinks.

Most Hollywood comedies have non-movie assumptions built into them. One of the most persistent is that movie characters have to react to funny events in the same way that stage actors do. So we get Jerry Lewis mugging. But in the direct style of new British directors, the audience is the target of the joke, and the funny events do not happen in the movie -- they are the movie.

This theory is based upon a belief that audiences, having seen hundreds of movies, come into the theater with an instinctive knowledge of film shortland. So the new-style British comedies ("The Knack," "Morgan," "Alfie," "Tom Jones," "A Hard Day's Night") go against standard practice, and their use of film itself is part of the comedy. When something funny happens, the actors don't react; the movie itself reacts by what it shows next.

This is the case with "The Graduate," In which Mike Nichols announces himself as a major new director.

He introduces us to a young college graduate (Dustin Hoffman) who returns to a ferociously stupid upper-middle-class California suburb. He would like the chance to sit around and think about his future for several months. You know -- think?

His family and their social circle demand that he perform in the role of Successful Young Upward-Venturing Clean-Cut All-American College Grad. At the end of two weeks Benjamin is driven to such a pitch of desperation that he demonstrates a new scuba outfit (birthday present from proud dad) by standing on the bottom of the family pool: Alone at last.

One of his parents' contemporaries (Anne Bancroft) seduces Benjamin, who succumbs mostly out of weariness and disbelief. Then he falls in love with her daughter (Katharine Ross), and sets in motion a fantastic chain of events that ends with Miss Ross (just married to a handsome blond Nordic pipe-smoking fraternity boy) being kidnapped from the altar by Benjamin. He jams a cross into the church door to prevent pursuit, and they escape on a bus.

This is outrageous material, but it works in "The Graduate" because it is handled in a straightforward manner. Dustin Hoffman is so painfully awkward and ethical that we are forced to admit we would act pretty much as he does, even in his most extreme moments. Anne Bancroft, in a tricky role, is magnificently sexy, shrewish, and self-possessed enough to make the seduction convincing.

Miss Ross, a newcomer previously seen in "Games," not only creates a character with depth and honesty, but is so attractive that now we know how Ann-Margret would have looked if she had turned out better.

Nichols stays on top of his material. He never pauses to make sure we're getting the point. He never explains for the slow-witted. He never apologizes. His only flaw, I believe, is the introduction of limp, wordy Simon and Garfunkel songs and arty camera work to suggest the passage of time between major scenes. Otherwise, "The Graduate" is a success and Benjamin's acute honesty and embarrassment are so accurately drawn that we hardly know whether to laugh or to look inside ourselves. 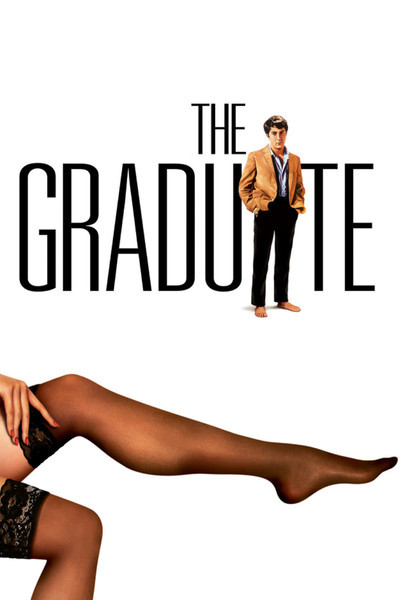