When it opened in September, 1964, "A Hard Day's Night" was a problematic entry in a disreputable form, the rock 'n' roll musical. The Beatles were already a publicity phenomenon (70 million viewers watched them on "The Ed Sullivan Show"), but they were not yet cultural icons. Many critics attended the movie and prepared to condescend, but the movie could not be dismissed: It was so joyous and original that even the early reviews acknowledged it as something special. After more than three decades, it has not aged and is not dated; it stands outside its time, its genre and even rock. It is one of the great life-affirming landmarks of the movies.

In 1964, what we think of as "The '60s” had not yet really emerged from the embers of the 1950s. Perhaps this was the movie that sounded the first note of the new decade--the opening chord on George Harrison's new 12-string guitar. The film was so influential in its androgynous imagery that untold thousands of young men walked into the theater with short haircuts, and their hair started growing during the movie and didn't get cut again until the 1970s.

It was clear from the outset that "A Hard Day's Night" was in a different category from the rock musicals that had starred Elvis and his imitators. It was smart, it was irreverent, it didn't take itself seriously, and it was shot and edited by Richard Lester in an electrifying black-and-white, semi-documentary style that seemed to follow the boys during a day in their lives. And it was charged with the personalities of the Beatles, whose one-liners dismissed the very process of stardom they were undergoing. “Are you a mod or a rocker?” Ringo is asked at a press conference. “I'm a mocker,” he says.

Musically, the Beatles represented a liberating breakthrough just when the original rock impetus from the 1950s was growing thin. The film is wall to wall with great songs, including "I Should Have Known Better," "Can't Buy Me Love," "I Wanna Be Your Man," "All My Loving," "Happy Just to Dance With You," "She Loves You," and others, including the title song, inspired by a remark dropped by Starr and written overnight by Lennon and McCartney.

The Beatles were obviously not housebroken. The American rock stars who preceded them had been trained by their managers; Presley dutifully answered interview questions like a good boy. The Beatles had a clone look--matching hair and clothes--but they belied it with the individuality of their dialogue, and there was no doubt which one was John, Paul, George and Ringo. The original version of Alun Owen's Oscar-nominated screenplay supplied them with short one-liners (in case they couldn't act), but they were naturals, and new material was written to exploit that. They were the real thing.

The most powerful quality evoked by "A Hard Day's Night" is liberation. The long hair was just the superficial sign of that. An underlying theme is the difficulty establishment types have in getting the Beatles to follow orders. (For "establishment,” read uptight conventional middle-class 1950s values.) Although their manager (Norman Rossington) tries to control them and their TV director (Victor Spinetti) goes berserk because of their improvisations during a live TV broadcast, they act according to the way they feel.

When Ringo grows thoughtful, he wanders away from the studio, and a recording session has to wait until he returns. When the boys are freed from their "job,” they run like children in an open field, and it is possible that scene (during "Can't Buy Me Love”) snowballed into all the love-ins, be-ins and happenings in the park of the later '60s. The notion of doing your own thing lurks within every scene.

When a film is strikingly original, its influence shapes so many others that you sometimes can't see the newness in the first one. Godard's jump cuts in "Breathless" (1960) turned up in every TV ad. Truffaut's freeze frame at the end of "The 400 Blows" (1959) became a cliche. Richard Lester's innovations in "A Hard Day's Night" have become familiar; because the style, the subject and the stars are so suited to one another, the movie hasn't become dated. It's filled with the exhilaration of four musicians who were having fun and creating at the top of their form and knew it.

Movies were tamer in 1964. Big Hollywood productions used crews of 100 people and Mitchell cameras the size of motorcycles. Directors used the traditional grammar of master shot, alternating closeups, insert shots, re-establishing shots, dissolves and fades. Actors were placed in careful compositions. But the cat was already out of the bag; directors like John Cassavetes had started making movies that played like dramas but looked like documentaries. They used light 16mm cameras, hand-held shots, messy compositions that looked like they might have been snatched during moments of real life.

That was the tradition Lester drew on. In 1959 he'd directed "The Running, Jumping and Standing Still Film," starring Peter Sellers and Spike Milligan among others: It was hand-held, anarchic, goofy, and contains the same spirit that infects "A Hard Day's Night." Lester had shot documentaries and TV commercials, could work quick and dirty, and knew he had to, because his budget was $500,000 for "A Hard Day's Night.”

In his opening sequence, which shows the Beatles mobbed at a station as they try to board a train, Lester achieves an incredible energy level: We feel the hysteria of the fans and the excitement of the Beatles, intercut with the title song (the first time movie titles had done that), implying that the songs and the adulation were sides of the same coin. Other scenes borrow the same documentary look; a lot feels improvised, although only a few scenes actually were.

Lester did not invent the techniques used in "A Hard Day's Night," but he brought them together into a grammar so persuasive that he influenced many other films. Today when we watch TV and see quick cutting, hand-held cameras, interviews conducted on the run with moving targets, quickly intercut snatches of dialogue, music under documentary action and all the other trademarks of the modern style, we are looking at the children of "A Hard Day's Night."

The film is so tightly cut, there's hardly a down moment, but even with so many riches, it's easy to pick the best scene: The concert footage as the Beatles sing "She Loves You.” This is one of the most sustained orgasmic sequences in the movies. As the Beatles perform, Lester shows them clearly having a lot of fun--grinning as they sing--and then intercuts them with quick shots of the audience, mostly girls, who scream without pause for the entire length of the song, cry, jump up and down, call out the names of their favorites, and create a frenzy so passionate that it still, after all these years, has the power to excite. (My favorite audience member is the tearful young blond, beside herself with ecstasy, tears running down her cheeks, crying out "George!”)

The innocence of the Beatles and "A Hard Day's Night" was of course not to last. Ahead was the crushing pressure of being the most popular musical group of all time, and the dalliance with the mystic east, and the breakup, and the druggy fallout from the '60s, and the death of John Lennon. The Beatles would go through a long summer, a disillusioned fall, a tragic winter. But, oh, what a lovely springtime. And it's all in a movie. 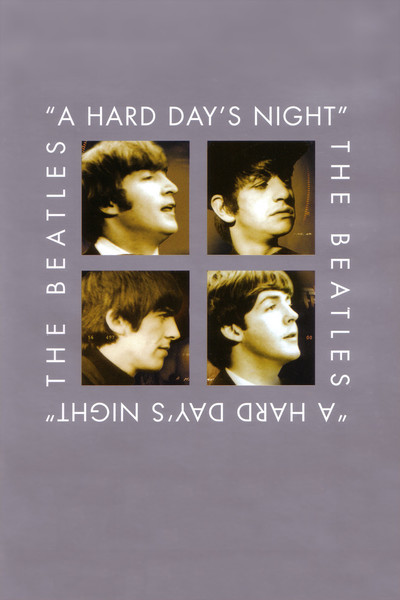