Concert films, especially of the stand-up comedy variety, are about the closest thing out there to truly critic-proof movies--they are essentially the cinematic equivalent of a souvenir T-shirt and are aimed so completely at the dedicated fan base of the performer in question that anyone who isn't a hardcore fanatic can feel like an outsider while watching one of them. The only stand-up films that have ever managed to transcend their limitations and reach out to a wider audience are Richard Pryor's "Live in Concert" and "Live on the Sunset Strip" and that was due almost entirely to Pryor's drop-dead brilliance on the stage transcending the limitations of the form, especially regarding the inevitable lack of connection between the performer and the people sitting in the multiplex. Most of the other films of this type have tended to be indifferently produced pieces of product that hang around theaters for a week or two before going into constant rotation on Comedy Central.

That is certainly the case with "The Fluffy Movie," a recording of a performance given by popular Mexican-American comedian Gabriel "Fluffy" Iglesias before a large and largely adoring crowd at the HP Pavilion in San Jose. Fans of his style of humor will no doubt enjoy it (as most of the people at the screening I attended seemed to) but anyone going into the film cold, as I did, will probably find it to be too much of a not-that-good thing that might have been satisfactory on television but not so much as something worth actually going out and forking over $12 to see in a theater. This is kind of a shame because Iglesias is an undeniably genial presence as a performer and there are some strong bits here and there, though not quite enough of them to win over anyone outside of his fan club.

Unlike a lot of comedians working these days, Iglesias is not particularly aggressive or vulgar--at least not as seen here--and the material that he covers is not particularly edgy or radical. He talks about a trip to India and compares the similarities between that country and Mexico. He does a bit about being in a bar and being so drunk that he doesn't realize that a gay man is hitting on him. He talks about video games and how kids back in the day were forced to become mechanical experts in order to keep them running in contrast to today's slick machines. A lot of time is dedicated to discussing the faults of his stepson, especially his positions towards wearing deodorant and taking out the trash.

Thanks to the frequent cutaways to the audience members cracking up, it appears as though Iglesias's live audience enjoyed the performance for the most part but when seen from the distance provided by the transition from the stage to the screen, the cracks begin to show. Presumably due to the fact that he is playing in an arena, he never seems to establish the kind of rapport with his audience that can make a stand-up performance more than just someone telling one joke after another. As for the material, it often feels a little too pat and predictable for its own good—the kind of stuff that any comedian of any stripe could crank out without breaking a sweat (anyone hoping for commentary on the immigration conflict, to name one especially ripe example, will be sorely disappointed)—and at 101 minutes, there is a little too much of it for its own good. One exceptionally expendable sequence is a prologue that purports to depict the circumstances surrounding his conception (involving his mother and a dashing mariachi band member) and his discovery of comedy (via renting "Eddie Murphy: Raw") and which also feature cameos from Tommy Chong as a video store owner and Ron White as a cigar-chomping  obstetrician—the former presumably to honor another one of Iglesias's inspirations and the latter to make viewers feel relieved that Larry the Cable Guy wasn't available.

The two best sequences in "The Fluffy Movie" come near the beginning and toward the end. In the first, he talks in detail about his struggles to get healthy in the wake of a diagnosis of Type 2 diabetes, and, in the second, he discusses his unexpected reunion with his father after an absence of over 30 years. In these bits, Iglesias seems more engaged than at other times, and the way that he tackles such potentially tricky and treacly material pays off in laughs and in genuinely earned sentiment. If only the film had contained more moments like this, it might have broken through the ranks and becomes something more than a cable special writ large.

Again, a film like "The Fluffy Movie" is essentially immune to reviews—fans of Iglesias will flock to it (and should probably add an extra star to my review) while those who have never heard of him will barely register its existence as they flock to see "Lucy" and "Hercules." I can't say that I came out of the screening as a convert to his comedic cause but I must admit that there are some funny moments on display that suggest that with stronger material and a tighter directorial hand, Iglesias could one day make a concert film that is worth going to see on the big screen. 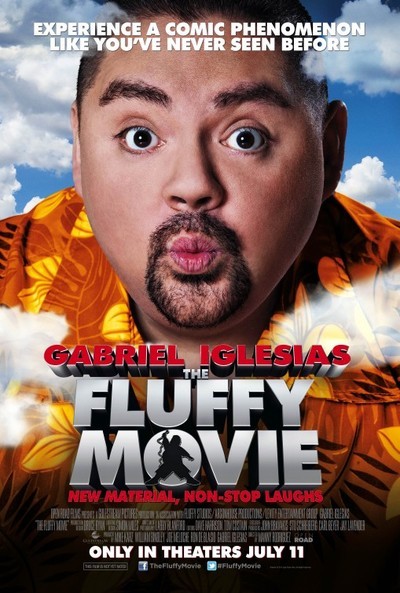 Gabriel Iglesias as Himself