You can imagine it as the plot of a “Curb Your Enthusiasm” episode: A woman drops her friends’ baby on her head while attending their tropical getaway wedding. (Actually, Larry probably wouldn’t even agree to hold the baby in the first place for fear of dropping her. Also: germs.)

But despite that intriguing premise, “The Drop” never reaches its full cringe comedy potential. It never even comes close. Director and co-writer Sarah Adina Smith offers some inspired moments and laughs here and there, but too often, running bits simply don’t pay off. She’ll bring up plot points or characteristics and then abandon them. The dialogue is so low-key and the pacing is so shaggy, it feels as if the actors did a lot of improvising. And with a couple of exceptions, the characters are all so superficial and unlikable that it often makes the film feel interminable.

If you’re going to amass a bunch of awful, selfish people at a resort and then sit back and watch them rip into each other, at least make them flawed in a complicated, compelling way, as in “Glass Onion” or “The White Lotus.” There’s not much to the people who comprise the wedding party in “The Drop” beyond a few annoying quirks, so when Smith aims for real emotional stakes toward the end, it’s difficult to care because the groundwork isn’t there.

Everything is upbeat and optimistic at the start, though, as married Los Angeles bakers Lex (Anna Konkle of “PEN15”) and Mani (Jermaine Fowler of “Sorry to Bother You”) are trying to make a baby of their own. They’re also making the cake for the destination wedding of their lesbian friends, Peggy and Mia (Jennifer Lafleur and Aparna Nancherla), who have an infant daughter. (The whole cake thing is very distracting, by the way – like, how are the layers going to withstand changes in cabin pressure during the flight? Since they’ve got a big container for the frosting AND their carry-on luggage, how will the airline allow them to bring everything? Couldn’t Peggy and Mia have hired a local baker?)

But the real problems arise once they arrive in paradise and see all their old friends. Joining in the festivities are the self-serious Shauna and Robbie (Robin Thede and Utkarsh Ambudkar), a narcissistic TV actress and her name-dropping husband; and Josh and Lindsey (Joshua Leonard, who co-wrote the script, and Jillian Bell), the hippie couple who owns the beachfront Mexican resort where the wedding will take place. As they’re all greeting each other at the airport curb, Lex briefly holds the baby, inspiring Mani to gaze at her lovingly. But when a bee buzzes by her head, Lex panics and drops the child on the sidewalk. (She’ll be fine.)

The moment is intended as a crucible of these characters and their relationships, a catalyst for confrontations as the weekend progresses. And it’s especially meant as an opportunity for Lex to explore whether she’s prepared to be a parent herself. Instead, we get a series of awkward conversations that never feel like they’re going anywhere. The college pals don’t have much in common anymore, but even that dynamic doesn’t result in any sort of pricky friction. And a through-line about Lex having been romantically involved with various members of all the other couples – both male and female -- adds up to nothing. Also along for the ride is Shauna and Robbie’s obnoxious teenage son, Levi (Elisha Henig), who watches porn on his iPad on the plane and hosts a vlog about the importance of men spreading their seed. Maybe Smith is making a point about toxic masculinity, but it feels underdeveloped.

Konkle and Fowler have an enjoyable, easy chemistry with each other, but they’re the only ones. Far too much of “The Drop” is exemplified by an eternal scene on a boat in which Smith cuts around between various duos or groups chatting. Round and round it goes, with the discussions growing more personal without getting any more interesting. You may find yourself tempted to do what Mani does: jump in the water and swim for shore. 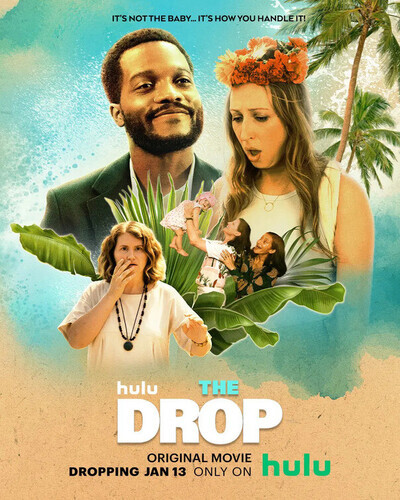