“The Drop” is just how I like my Tom Hardy–in nearly every scene.

His notorious jailbird in “Bronson” was just too savage. His Batman arch-nemesis Bane in “The Dark Knight Rises” was too unintelligible. His recent solo tour-de-force behind the wheel in “Locke” was too much of a gimmick. And while this terrific British actor purred his way through “Inception” like a randy tomcat on a hot night, there just wasn’t nearly enough of him onscreen.

Now here comes “The Drop,” a solid, occasionally gripping crime thriller based on a short story by Dennis Lehane (“Mystic River,” “Gone Baby Gone”)–making his screenwriting debut–and directed by Belgium’s Michael R. Roskam (whose unsettling “Bullhead” was a foreign-language Oscar nominee). There is a whole lot of Hardy going on, and “The Drop” is at its best when we can observe how the actor slowly peels away the layers from his character in a finely calibrated performance that builds to a satisfying full reveal in the final act.

Hardy’s Bob Saginowski is a dark horse of a Brooklyn bartender who excels at keeping his head down and looking the other way whenever the Chechen mobsters who own the place launder their ill-gotten money by way of a “drop” at the drinking establishment. This slice of working-class gang life is extra notable as the final film appearance by the late, great James Gandolfini–perfectly fine as Marv, Bob’s cousin and boss, who turns out to be the sort of desperate type that Tony Soprano would have had disposed of with nary a blink.

But this is Hardy’s show all the way, never more so than when he innocently corrects a humorless Marv when he refers to the gangsters as “Chechyans.” As Bob–who knows better than to insult dangerous men–explains, “I think it’s like how you don’t call people from Ireland Irelandians.”

Quietly compelling can be harder to do than obviously showy, but Hardy handily establishes Bob as a soft-spoken sweetheart early on as he comps shots to the regulars as they salute the anniversary of a friend’s passing and allows a lonely old woman to hang out all day on Marv’s special bar stool. There is a kind of gentle-giant  masculinity in Hardy’s demeanor, accented by his cuddly cold-weather attire, that recalls the early Sylvester Stallone as Bob dutifully attends Mass and sweeps up after hours.

The catalyst for the plot is a late-night visit to the bar by two masked robbers, a heist that proves much more complicated than it first appears. To spill too many beans would spoil what happens, but let’s just say the Chechens–who have no qualms about driving around town in their work van while torturing an unlucky associate in the back as blood drips through the floor like leaky motor oil–want the $5,000 that went missing and they want it now. Soon, Marv is in over his head and resorts to measures that are destined to backfire.

Meanwhile, Bob’s insular life is turned around when he passes by a garbage can on the way home and hears an animal whimpering inside. Rocky Balboa had his pet turtles, Cuff and Link. And Bob has Rocco, an abused puppy who soon becomes his adorable companion. Make what you will of the fact that the dog is a pit bull, a breed that–rightly or wrongly–has a rep for suddenly turning vicious. But it is curious how Bob always skips the line for Communion at church, suggesting that he wants to avoid going to confession.

There is also an Adrian counterpart who enters Bob’s life in the form of Nadia (Noomi Rapace of “Prometheus” and the original Swedish version of “The Girl With the Dragon Tattoo”), who owns the trash container where Rocco was found. A former employee at an animal shelter, she agrees to tutor Bob on how to tend to his new best friend and even offers to dog sit.

Soon, he and Nadia start to become close companions as well, although he remains a gentleman throughout their time together. And, soon, he will learn that both she and Rocco used to belong to a onetime psychiatric patient and purported killer named Eric Deeds. Deeds (played by Flemish actor Matthias Schoenaerts, a standout in “Bullhead” as well as last year’s “Rust and Bone”), who likes to unexpectedly show up at people’s houses to get their attention, is determined to get both the pup and Nadia back.

As the climax builds to Super Bowl Sunday–when the biggest drop of the year is expected – it becomes clear that Bob, if he wants to assure the safety of Rocco and Nadia as well as hold off the gangsters, will have to make some difficult decisions.

Roskam captures the gritty run-of-the-mill milieu, including the cluttered lower-income houses filled with a lifetime of worthless tchotchkes, and knows how to build tension–this is one of those films where you expect the worse to happen around every corner and down every alley.

Not everything is perfect with “The Drop.” There is an on-the-ball detective (John Ortiz, a stage veteran who was Bradley Cooper’s friend in “Silver Linings Playbook”) investigating the robbery who suspects there is more to Bob and the situation at the bar than meets the eye, but his involvement turns out to be peripheral at best. The terrific Ann Dowd of TV’s “The Leftovers” barely gets a chance to make an impression as Marv’s fed-up sister. And as good as Schoenaerts is, he isn’t consistently convincing as an unstable creep.

But if you have been itching to witness Hardy at full throttle, here is your chance. The actor should be, by all rights, at the same level by now as Michael Fassbender and Benedict Cumberbatch, two other fantastically talented U.K. imports who have built up passionate cults in recent years. “The Drop” is a good start. But let’s hope that when Hardy takes his bow as the lead in the resurrected “Mad Max: Fury Road” next May, he will get the full notice and opportunities that he rightly deserves. 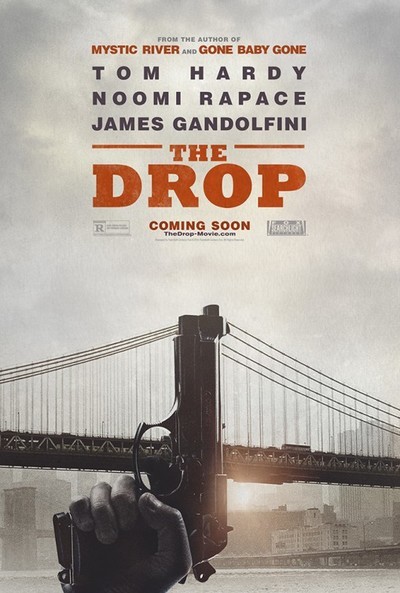 Rated R for some strong violence and pervasive language.