While "The Devil's Violinist," an arresting biopic about inspired/possessed violinist and composer Niccolo Paganini, ends on a sour note, it's also beautiful and thoughtful. Writer/director Bernard Rose ("Immortal Beloved," "Candyman") is in his element here, and he packs a lot of nuance into his fictionalized account of Paganini's eventful trip to London, during which time he performed for the King of England at the Royal Opera House. Rose presents Paganini as a public figure who simultaneously encourages and resists the rumors and myths that defined his seemingly frenzied, virtuosic style. The film's version of Paganini is in that sense simultaneously bigger-than-life and smaller than his reputation, an artist who is ultimately enslaved by his talent. It's an anti-romantic biography about a great artist, one whose central themes are basic, but whose energy and execution is irresistible.

Rose articulates his film's generic story through a densely-layered scenario that's performed, paced, visualized, and directed with great care. The film begins as a variation on Goethe's "Faust" since that's the popular narrative of Paganini's public life. After an unappreciative music hall crowd half-jeers and half-applauds his performance of "The Spanish Dance," a playful caprice comprised of themes for farm animals, Paganini (real-life violinist David Garrett) makes a deal with a devilish man named Urbani (Jared Harris) who promises fame and glory--after Paganini signs his life away. This scene is important since it establishes the central role of myths and narrative-making in "The Devil's Violinist," a story that serves as a counter-narrative that ultimately doesn't go anywhere worth remembering. Still, Paganini was a musician defined by his manic performances and infamous reputation as a gambler, drinker, and seducer, so it makes sense that Urbani is, in the beginning, Mephistopheles to Paganini's Faust.

Thankfully, Rose presents Urbani as a minor Devil, someone who brokers deals through letters, and makes commands with a ridiculous Peter Lorre-esque accent (Seriously, where did Harris pick this accent up? It's simultaneously abysmal and endearingly silly). Case in point: when desperate social-climber John Watson (Christian McKay) promises the Royal Opera House's manager that he can deliver Paganini for at least ten performances, Watson and Urbani make a deal through an anxious series of letters. There is nothing mystical, nor especially mysterious about this mutually parasitic exchange since "The Devil's Violinist" is only partially grounded in a romanticized version of reality. Pagani's story is about the creation of artists' stories, so it stands to reason that "The Devil's Violinist" eventually becomes a frustrated romance, one that follows Paganini's affair with Watson's daughter Charlotte (Andrea Deck), a coloratura soprano singer. Paganini and Charlotte's affair is never that interesting since Garett and Deck have no chemistry, but it's thankfully only one large plot thread amongst several.

There's so much else going on in "The Devil's Violinist" that its main subject's romance doesn't really matter. Most of the film's weakest aspects highlight something interesting, like how Rose clearly encouraged Harris, Garrett, and McKay to over-emphasize the stilted, actorly qualities in their performances for the sake of drawing attention to their characters' nervous habit of, well, acting for each other. Garrett's performance is the most interesting of this bunch since he mostly holds his head in his hand, and hides behind quietly pained grimaces--until he's performing. When Garrett plays, he not only comes alive, but looks like someone that's willing himself to orgasm just by scowling.

Garrett's performance isn't great, but it does work in its context since Paganini constantly (and fruitlessly) fights his reputation, though he only achieves fame by selectively embracing it. This is evident in one of the film's best scenes, the one where Paganini's seduces a bar-full of angry publicans, breaks his violin's strings mid-performance, and then keeps on playing with what looks like two or three strings. He can't stop himself from performing. He's enthralled by his passions, making the most of Garrett's constipated glares during his otherwise inspired performance of Paganini's 24th caprice. There's a world of sublimated tension swimming under Garett's eyes, and while that's probably too much pantomime for a non-professional actor to skilfully manage, there's also something to be said for a sensibly campy performance.

With that in mind, "The Devil's Violinist" is the kind of movie that constantly threatens to blow up, but is just too holistically engaging to ever fall apart. Narrative sides involving muckraking journalist Ethel Langham (Joely Richardson) and picturesque, gas-lit street scenes are especially thrilling, as is Harris's delightfully odd performance. Urbani's dismissal of Langham is particularly funny--"Don't be deceived: she writes for the Times"--as is the elated expression on Harris's face when he mispronounces the title of Mozart's opera as "The Mah-jeek Flute." "The Devil's Violinist" is probably not eccentric enough, but it's so charming and brattily clever that every false note Rose and his co-creators hit feels negligible compared to the ones they absolutely nail. 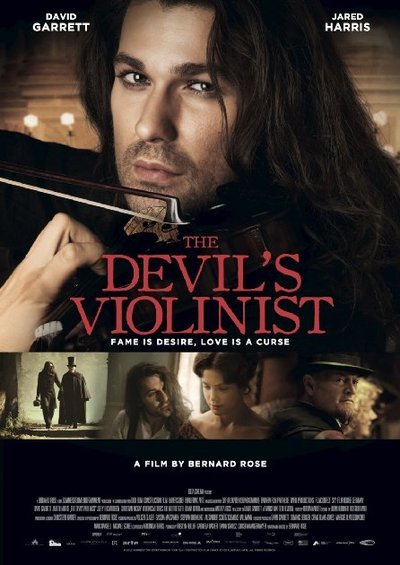 Rated R some strong sexuality/nudity, and for drug use