The Deeper You Dig

One might, if uninformed, look at this movie’s opening credit, “An Adams Family Film,” and chortle “didn’t you drop a ‘d’ there?” But yes, Virginia; there is a real one-d Adams family: John Adams, his partner and spouse Toby Poser, and their teen daughter Zelda Adams. And together they’ve made one of the more striking and effective horror pictures of recent years, “The Deeper You Dig.”

These filmmakers, who collaborate on every aspect of their for-all-intents-and-purposes homemade productions, don’t work exclusively in the horror genre. Prior pictures explored family drama and crime, and also featured in some capacity Zelda’s sister, Lulu, who sat this endeavor out to go to college. But the Adamses take to horror as if to the manner born.

The movie begins with evocative shots of an old, empty, decrepit house with a vintage radio sitting atop a fireplace mantle. “After You’re Gone” is the crackly song emanating from it. John Adams plays Jack, a taciturn hirsute dude who’s renovating the house. But he likes a drink as much as, if not more, than his work. And one night after a couple shots too many, driving home and swerving to avoid some deer on the snowy rural road (this movie’s sense of snow is almost as intense as that of Kubrick’s “The Shining”), he looks away from the windshield for a second and boom, his life changes for ever and not for better.

The person he hits is Frankie (Zelda Adams), a feisty, zesty, wholly lovable teen whose eccentricities include a taste for the kind of music mostly heard on 78 RPM records, or emanating from vintage radios. Frankie’s nameless mom, played by Poser, is a psychic who years ago lost her “touch,” and now works as more or less a con artist. The disappearance of her daughter brings that touch back. Slowly and rather terrifyingly, sometimes in the form of grisly dream sequences.

After burying Frankie, Jack, understandably, is even less capable of keeping his mind on his work. Frankie keeps appearing to him even after he’s dug her up and dismembered her. “I know you’re not real,” he grumbles to her as she mocks him while sitting on that fireplace mantle. “I’m as real as I am dead,” she taunts. He tells her to get out of his head, and she confidently asserts that she is not in his head … yet.

In addition to crafting a story that, while not entirely unfamiliar, has enough perverse twists to feel fresh, the Adamses, while working with a low budget, practically revel in the mechanics of moviemaking. Individual shots play with focus and lighting in ways that yield substantial horror-movie bang, and their concoction of settings that create a surreal contrast to the rural locations is always satisfyingly crafty. One sometimes thinks of the gonzo stylings of another horror indie, 1979’s “Phantasm.” In its own way, “The Deeper You Dig” dares to get almost as unhinged as that picture. It’s a trip. 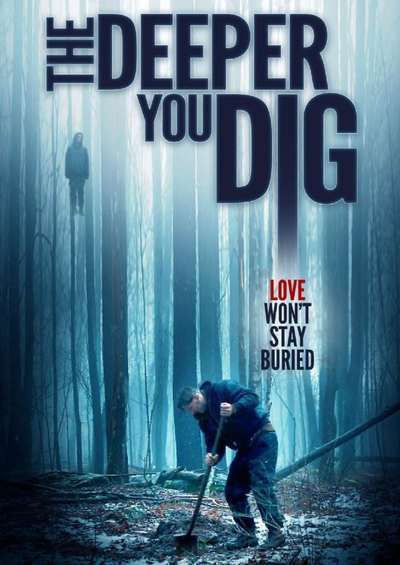