"The Dark and the Wicked" has enough jump scares to satisfy the "Yes, but it is scary?" contingent of horror fans. But for the most part, this film from writer/director Bryan Bertino—about strange goings-on at a farmhouse where the family patriarch is dying—focuses on atmosphere and creeping dread, channeling 20th century classics like "Don't Look Now," "The Tenant," the original "Alien" and "The Sixth Sense."

The opening 15 minutes are by far the most striking, letting us travel around the central setting, a remote farmhouse and a barn full of bleating goats surrounded by flat, empty acreage, and letting us get to know the main characters. The father (Michael Zagst) has been in decline for a long time. He is pictured mostly in closeup, in what will eventually become his deathbed, assisted by oxygen. The mother (Julie Oliver-Touchstone) is traumatized from having to care for him, mainly by herself.

When their adult children, Louise (Marin Ireland) and Michael (Michael Abbott Jr.), finally arrive, the palpable feelings of suppressed guilt and anxiety are as unsettling as the moaning winds that are so often heard on the soundtrack. (Sound designer Joe Stockton uses multitrack stereo to tighten the emotional screws, but always subtly; you hear muffled vocal sounds and creaky floorboards to the right and left of you, or somewhere behind you, and you might wonder if it's only your imagination).

What's going on here? Something dark and wicked, clearly—but more than that. Something foul, obscene, possibly evil. We don't know what, but every detail of performance and craft points us in the direction of accepting that there are things happening beyond the grasp of our five senses, and we have to admit to that, and confront it, somehow, in some way.

Things become a bit more typical after that. The film springs its first big "Oh my God!" shock pretty early and keeps escalating steadily. This is basically "The Discount Shining," albeit compressed and somewhat accelerated, treating a small farmhouse as the indie movie equivalent of the Overlook Hotel, and breaking up chapters by flashing the names of days.

While your own mileage will vary, I preferred the earlier parts of the film to the rest, because hell starts to break loose pretty fast, the remaining story often seems to have been somewhat creakily extruded by having the main characters experience horrific and inexplicable things but then refuse to communicate with each other about them ("I don't want to talk about it" is a common phrase); and sometimes there isn't enough breathing room between shocks and scares to create the sort of buildup that would make them devastating, as opposed to momentarily effective. (This is a problem in a lot of recent horror, though not necessarily a deal breaker here; the last two-thirds of the movie are merely very good, where the first section is perfect, and daring for how it demands that the audience adjust to a slower pace and let their imaginations do a lot of the work.)

The movie's focus on the emotional dynamics of parents and children makes it a companion piece to psychologically driven recent horror films like "The Babadook" and "Mama," where the process of grieving and facing fear of a parent's death (and everyone's death) manifests itself in the form of weird happenings and creepy images that are basically metaphors transformed into actions and beings. Without giving too much away, suffice to say that there's a reason why human beings have traditionally described doing work on one's own psyche as wrestling with demons. 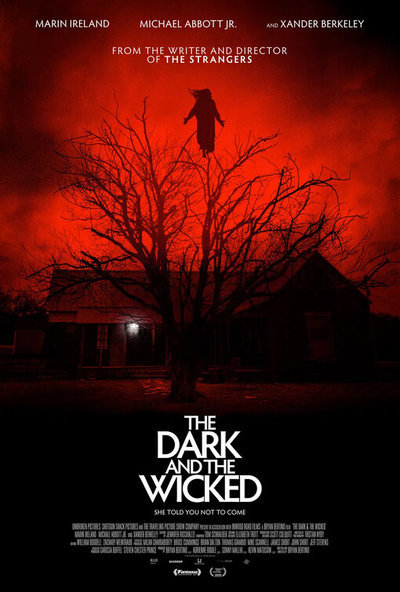