Attempting to make a companion to "The French Connection" is the kind of seemingly foolhardy move that would give even the most audacious of filmmakers pause—William Friedkin's 1971 award-winner literally redefined what could be done within the confines of the cop movie genre. (This was proven definitively in 1975 when not even returning stars Gene Hackman and Fernando Rey and talented director John Frankenheimer could make "The French Connection II" into anything more than a barely-remembered mediocrity.) Nevertheless, the new French crime drama “The Connection” attempts to do just that, and, while the results inevitably pale in comparison to "The French Connection"—which could be said about virtually every other film currently in release—they do make for an above-average work that offers viewers a new perspective on a familiar story.

The film offers a European take on the "French Connection" story by telling the tale of the infamous heroin smuggling ring and a cop charged with bringing it down on their home turf of Marseilles. The cop is Pierre Michel (Jean Dujardin), a steadfast and dedicated magistrate who is all too familiar with the horrors of addiction from his years bearing witness to junkies as a child protective services officer and from his own past struggles with gambling. His main target is Gatean "Tany" Zampa (Gilles Lellouche), the man heading a criminal enterprise that has been sending huge amounts of heroin to America. An increasingly violent game of cat and mouse develops between the two, each one determined to stop the other at all costs.

As they go about their respective businesses, we begin to learn more about the two men and what makes them tick. Pierre, for example, is as incorruptible of a cop as one could hope to find, but it soon becomes obvious that his tunnel-vision attitude toward work has wreaked havoc on his personal life by straining his relationship with his wife (Celine Sallette) to the breaking point. Tany also has problems on the home front, chiefly in the form of a money pit of a nightclub he has opened to keep his own wife happy. Interestingly, Tany does not come across like a drug kingpin as much as he does just an ordinary businessman whose life is a never-ending parade of shipping schedules, profit margins and labor problems in need of settling—his method of dealing with an associate with a cocaine problem is certainly unique. And yet, while they may be similar in certain ways, they are in a situation in which only one can survive and each goes to great lengths to ensure that it is they who succeed.

The original "The French Connection" is still revered for its intense and elaborate action set-pieces (it still holds a place of high prominence on the list of all-time great car chases) and director Cedric Jimenez has wisely chosen not to try to emulate it on those grounds. Instead of a standard thriller with the requisite number of action beats, he takes a more purely procedural approach, more interested in the accumulation of details surrounding the case and the people involved—in that regard, it is closer to David Fincher's masterpiece "Zodiac" than anything else. There is a lot of information being conveyed here, but Jimenez and co-writer Audrey Diwan do an effective job of putting it forth in a lucid and straightforward manner. He also does a strong job of evoking the mid-Seventies period without resorting to kitschy clothes or soundtrack choices thanks to a visual style that is clearly evocative of the crime dramas of the era. (That said, it does run a little long at 135 minutes and probably could have survived with one or two fewer montage sequences.)

The casting of Dujardin, most famous for his Oscar-winning performance as the flailing movie star in "The Artist," may strike some people as a bit odd, and, indeed, his undeniably debonair persona does seem somewhat strange in the early scenes. As the film progresses and he becomes more and more gripped with nailing Tany at all costs, that slick veneer slips away and his character becomes a sweaty raw nerve that he portrays with undeniable power. As his opposite, Lellouche is equally compelling in the way that he makes his ruthless crime lord into someone that viewers can still relate to on a basic human level despite his ever-expanding list of misdeeds. There is a large cast of supporting players surrounding these two throughout and their contributions go a long way towards helping to establish the period and the tone of the film as a whole.

Again, "The Connection" is not going to replace "The French Connection" in the collective moviegoing mind anytime soon. However, fans of that film will find it to be an interesting riff on a familiar story while those who haven't seen it will be able to appreciate it as a solidly made crime drama in its own right. 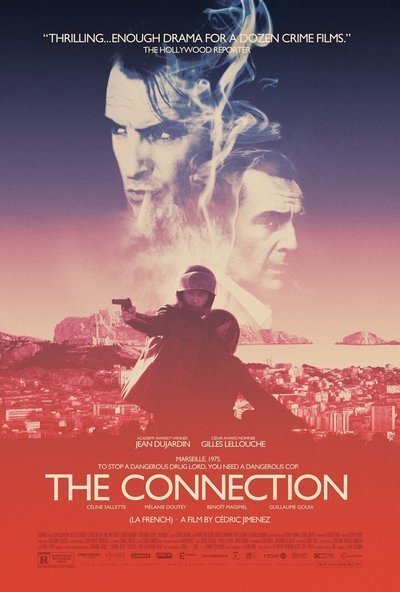