Tim Fehlbaum’s “The Colony” has many ideas about the future, and while not all of them quite stick together, there’s a few interesting aesthetic and narrative choices to make it something of a curiosity. There’s enough going on to capture your notice for brief stints before trailing off into dense plot details or well-worn sci-fi tropes.

“Climate change. Pandemics. Wars.” These are the Horsemen of the Apocalypse that lead the ruling class to skip earth and move to Kepler 209, a faraway planet that ends up having some unintended long term effects. Two generations later, the rich want to go back to earth because their ability to procreate has run out, a la “Children of Men,” so their civilization is aging and will eventually die out if something doesn’t change. They sent an exploration team to scout their old home planet, but the first expedition was lost. We join the second round just as they’re crashing into the ocean. Miraculously, one woman, Blake (Nora Arnezeder), and one man, Tucker (Sope Dirisu), survive to start their mission on a windswept ocean floor while the tide is out. However, these explorers aren’t alone and they soon discover this semi-wet “Waterworld” is actually inhabited by the survivors—young humans all under the age of 30—of the poor people left behind by the upper classes.

What follows is a bit of a thriller, a bit of a moral outlook on the issue of colonization from the perspective of the colonizer. Blake soon finds herself alone on a home planet that feels anything but welcoming, tossed into a water-themed riff on the “Mad Max” movies. The survivors, as they’re dubbed, really live up to their name through their burlap and rags costumes, muddy faces, and unkempt hair. Blake makes an uneasy alliance with a young survivor named Maila (Bella Bading) and her mother, Narvik (Sarah-Sofie Boussnina), but there’s a bigger group of survivors pillaging smaller groups like Maila’s and aligning itself with the power-to-be in the hopes of reaping their rewards. With them come secrets and a dastardly plan not just to recolonize earth but the planet’s human resources.

The screenplay from Fehlbaum and Mariko Minoguchi—with extra writing credits to Jo Rogers and Tim Trachte—can get bogged down in some of the sci-fi jargon or cross-cultural misunderstandings (between the Keplers and the survivors, who developed their own language after the well-heeled society took English with them). But the story moves at a reasonable pace, lunging forward through duller moments to get to its next reveal or action sequence before too long. True to its namesake, “The Colony” ponders the ethical implications of a dominant group becoming the rulers over a people they see as inferior. Blake embodies that shift from someone who was taught to think of “the good of the many,” defaulting to the will of the state, to someone thinking for themselves and reaching a difficult, if more humane, conclusion.

Further complicating the movie’s emotions is this dueling push-and-pull of Blake’s brushes with motherhood and the memories of her father. The story gets sometimes obsessively fixated on her ability to procreate, later explained by her generation’s loss of its ability to do so, and while motherhood analogies are not new to sci-fi, this one seems to leave her responses on a surface-level. She’s uneasy when handed her first baby and later takes on a maternal role for Maila when trying to rescue her from captors. But by the movie’s end, it’s unclear if motherhood is something she wants or something the colony wanted for her. Blake's father (Sebastian Roché), who was among those lost in the first exploration, looms large in her mind, and she’s forced to reconcile with his teachings in the face of its implications.

These flashbacks show a sanitized, brightly lit world of the rich expats, a world away from the grim earth where they left the poor behind. It channels the kind of class division in sci-fi movies as “Metropolis” or “Elysium,” where one group lives in luxury and the other half cannot even fathom that level of comfort. To create this muddy view of the future in “The Colony,” Markus Förderer’s mostly grungy grey and green cinematography concocts a visual style that looks so thick, you almost expect the camera to emerge grimy itself. It’s a creative feat that sells the illusion of a future world where large tides have destroyed much of the ecosystem we know today (RIP trees) and leaves behind nothing but ocean spray in the air.

However, not all aspects of “The Colony” achieve lift-off. Following in the footsteps of great women leading sci-fi movies but never stepping out of their shadow, Arnezeder fails to bring Blake to life through her performance. It’s wooden and serviceable but none-too-memorable, almost like some of the movie’s expository scenes or its tacked-on ending that brings little closure to some of the ideas posed in the narrative. “The Colony” is more of an afternoon distraction than something that will truly challenge a worldview. 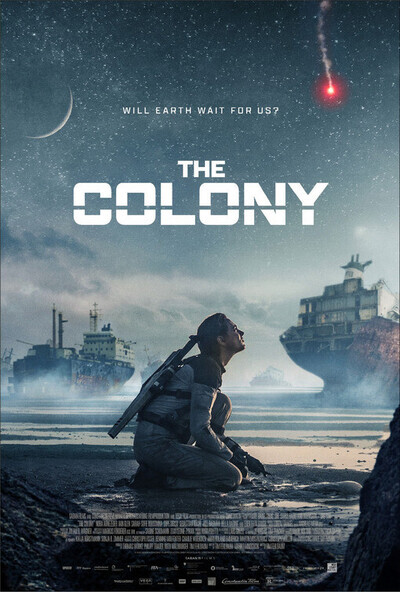