Harrison Ford made me believe he was talking to Greedo and Jabba the Hutt in the early "Star Wars" films and those characters were as low-tech as Gumby and Pokey compared to the technology used to create Ford's canine co-star in "The Call of the Wild." And yet, I never bought it. Instead of getting caught up in the story, I kept wondering how they achieved the effects, like the interactions between the CGI dog with the real-life people and props around him. A lot of work clearly went into scanning a dog from every angle, and getting the muscles, fur, weight, and shape to look real. But the dog still seems synthetic compared to the animals in movies like "A Dog's Purpose" and Disney's own annual nature films (even compared to fully animated characters in the original "101 Dalmatians" and "Lady and the Tramp"). And so does the story.

The problem is less the technology, which is very impressive, than it is the uneven storyline, which zigzags from slapstick to poignance to action. The Alaskan and Canadian scenery is spectacular, the production design is exceptional, and Ford brings heart and dignity to his role, including the narration throughout the film. But the movie is uneven in tone and in its sense of its audience—it is too sad and violent for young children and too superficial for older audiences. The many-times-filmed story has here been sanitized a bit for modern audiences (less racism, for example), but it is rougher than the typical PG film, including animal abuse, and sad deaths of both canines and humans.

"The Call of the Wild" is based on the episodic Jack London classic published in 1903 about a pampered pooch who triumphs over abuse to find purpose and community, and then is increasingly drawn to the limitless world beyond civilization. Ford plays John Thornton, a grizzled loner living in the Yukon who drinks to numb the pain of the loss of his son. His grief was so devastating it caused the end of his marriage. John is surrounded by prospectors seeking gold, but all he wants is to be left alone. He somehow knows everything that has happened to Buck, even when he was nowhere near, and everything Buck is feeling, too. He has a couple of encounters with Buck before they end up together out in the wilderness.

Buck, a St. Bernard/Scotch Shepherd mix, lives in a northern California community in the late 19th century. He has the run of the town because he is the spoiled pet of the local judge (Bradley Whitford). When someone breaks off a piece of bread from a sandwich to offer it to him, Buck ignores the offer and grabs the rest of the sandwich instead. The judge's family and their servants patiently rearrange the chaos he creates throughout the house, righting the porcelain vase before it falls after Buck has moved on to knock over something else. Buck is uselessly warned by the judge not to go near the picnic table filled with delicious treats for a party. But it's not that Buck can't resist; he does not even try. Buck has never had to consider anyone but himself.

But then Buck is captured. The Klondike gold rush in the Yukon means that sled dogs are needed, and top dollar is paid. Buck is sold first to a cruel man who clubs him into submission, and then to a couple who delivers mail via dogsled, Perrault (Omar Sy) and Francoise (Cara Gee). At first, Buck has no idea how to be part of a team, but as he learns how to work with others for a purpose he begins to feel a sense of pride, accomplishment, and connection he never had before, especially after he undertakes a dangerous rescue. Caring for others helps Buck realize that the alpha dog at the head of the team is cruel and selfish, and so Buck challenges him, and takes over as leader. This episode is the highlight of the film, and could easily have filled a satisfying feature on its own.

The mail route is canceled, and in a jarring mood shift from a naturalistic style to melodrama so heightened we expect the villain to twirl his moustache, the dogs are sold to an arrogant, greedy city slicker named Hal (Dan Stevens). He has come to the Yukon with his sister Mercedes (Karen Gillan) and her husband to find riches and he will do anything for gold and suspects everyone else of being as much of a cheat as he is. They fill up their sled with a Victrola and a crate of champagne, and they think they can beat the dogs into risking their lives. Just as Buck was awakened to the idea of protecting lives, John finds that he is able to care and rescues Buck (but not the other dogs).

Once Buck and John are in a remote cabin together, Buck begins to identify with the wild wolves more than his human companion, especially when he sees a beautiful female white wolf in the woods. Just as he learned to adapt to the sled team and to living with John, he begins to adapt to life apart from humans. Or, maybe it is not adaptation or some sort of feral devolution; it is portrayed here as an evolution for Buck to become his truest self. "He was less attentive to his master's commands than to his own instincts," the narrator tells us about Buck early in the film. But what the movie shows is that Buck was acting on his own impulses, and it was understanding his truest instincts that led to nobility and accepting duty. That is the theme that has made this an enduring story for more than a century. Perhaps the next remake will tell it better. 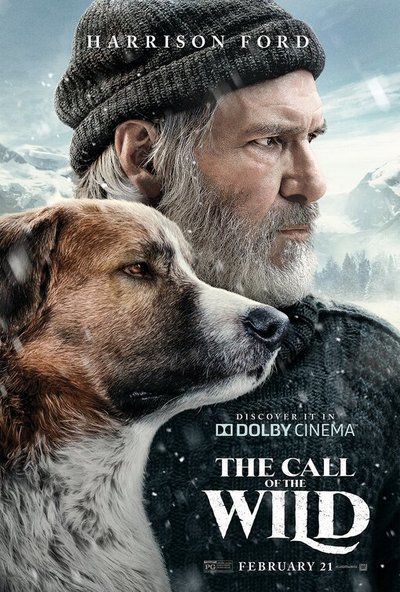