Lady and the Tramp

The march of Disney’s live-action remakes continues, but this time, its latest reimagining of a beloved classic will not open in a theater near you. Instead, “Lady and the Tramp” will only be available on Disney+, the company’s new digital streaming platform launching November 12. The situation may become an interesting case study on audience behavior (which isn’t that what every streaming company loves?). When faced with the choice of watching the original or a new remake at their fingertips, which option will the viewer choose? Will they binge the two back-to-back to compare? Or, will the new version replace the old as the family favorite?

We may never know the answers to those questions because the streaming side of the movie business loves to collect our data but has very little incentive to share its findings. What I can tell you is this: Just like many of the Disney live-action remakes before it—think “Cinderella,” “Alice in Wonderland” and “The Jungle Book”—much of the “Lady and the Tramp” remake follows the exact story of the animated version. On Christmas in the 1900s, a young couple opens a Christmas present revealing an adorable cocker spaniel pup inside. Jim Dear (Thomas Mann) and Darling (Kiersey Clemons) are smitten with the affectionate puppy they name Lady (voiced by Tessa Thompson), and she becomes the center of their world. Her pampered life is nothing like that of the scruffy loner named Tramp (Justin Theroux), who roams the streets of New Orleans unattached to any other dog or family. On the run from an obsessive dog catcher (Adrian Martinez), Tramp crosses paths with Lady, and while at first, the two don’t get along, she helps him escape his captor and he warns her that her happy home life may change with a baby on the way. His words come true and Lady’s place at the center of attention is taken by Jim Dear and Darling’s new baby. When her owners leave her in the care of dog-hating Aunt Sarah (Yvette Nicole Brown) and her home-wrecking pair of cats (Nate "Rocket" Wonder and Roman GianArthur), Lady escapes and then finds and falls for Tramp, leading her to question her idea of home.

Director Charlie Bean, who comes to the movie with a background in animation, works well to smooth over the rougher transitions between the live dogs, their animated mouths and human-like expressions. Of course, the harder or more dangerous scenes for pooches on the run are covered by the magic of computers. Luckily, the movie’s real-life fluffy stars have enough charm and appeal for any dog lover. In comparison, the human actors seemed more stiff and unnatural than their digitally altered co-stars. Like their animated counterparts, Jim Dear and Darling are unfortunately rather one-dimensional but well-meaning dog parents.

Although much of the 1955 animated movie remains intact, Andrew Bujalski and Kari Granlund’s script updates a few things. Lady still has her circle of neighborhood dogs to rely on, and while Trusty (Sam Elliott) the bloodhound is the same, Jock (Ashley Jensen) the Scottish terrier is now a lass instead of a lad. The street dogs Peg (Janelle Monáe), a Pekingese, and Bull (Benedict Wong), a bulldog, are present, but thankfully the many silly accents of the dogs in the pound, like a Chihuahua with a Mexican accent, have been left in the past. Instead of the “Meet Me in St. Louis”-style midwestern setting from before, now the story’s set in a jazzy turn-of-the-century New Orleans, a place brimming with diversity. Perhaps the most noticeable change is the welcomed excision of the Siamese cats and their infamous song, replaced instead with another pair of smooth-coated kitties. However, the song that replaces is so utterly forgettable, it felt even below the mediocre caliber of “Mary Poppins Returns.”

If we’re going to be getting more of the same old stories, at least Disney has caught on to making them more diverse. In that sense, “Lady and the Tramp” is closer to the 1997 “Cinderella” starring Brandy and Whitney Houston than the 2015 remake. Although it’s an idealized portrait of New Orleans and racial tolerance at the start of the 20th Century, this is a movie about talking dogs, after all. And as far as feel-good fantasies go, it isn’t so bad. Plus, it gives actors like Adrian Martinez a chance to play a comically single-minded dog catcher, while Ken Jeong is a sarcastic yet sympathetic (to Lady) doctor, and Arturo Castro shares a duet of “Bella Notte” with F. Murray Abraham.

At the level of the dog’s point-of-view, much of the period details depends on the costumes by Colleen Atwood and Timothy A. Wonsik. The pair deliver a solid ensemble that’s eye-catching and fun in detail. There’s also an occasional pop of color in some of the outfits, like in Aunt Sarah’s wardrobe, that made me wish they could be more daring in their designs and fabrics for the rest of the cast.

“Lady and the Tramp” scratches an itch for dog lovers and may satisfy the young viewer’s curiosity when digging through the family’s new Disney+ subscription. However, so much of the movie is just fine when not feeling rushed or stilted, but doesn’t offer new surprises to stand on its own. I recognize that a lot of my affection for this movie came from the nostalgic rush of recognizing scenes and details, smiling like a goof at Disney World during “Bella Notte” and the restaurant scene, a childhood favorite I would sometimes watch while cradling a stuffed toy of Lady by my side or in my lap like she was my own dog. The version here even features the old school chorus of the original, which I’m sure will go over great with many viewers who, like me, watched it many times growing up. But while it's nice to share that thrill with a new generation, why not just put on the animated movie in the first place? 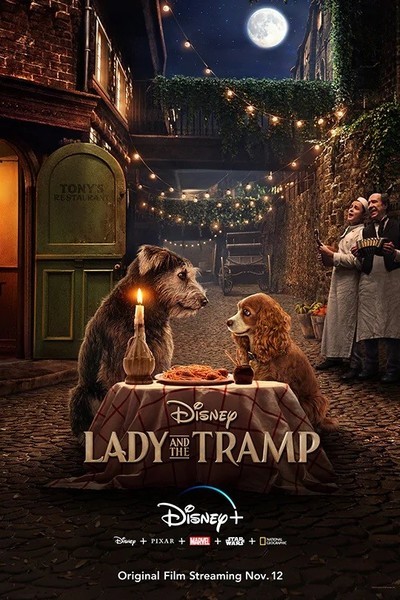 Rated PG for some mild thematic elements and action/peril.