Geraldine Viswanathan has been steadily working her way through the coming-of-age subgenre, on her way to becoming a star. In the open-hearted romantic comedy “The Broken Hearts Gallery,” the charismatic whirlwind of an actress is vivacious and lovable, a young woman who desperately surrounds herself with tchotchkes, knick-knacks, and souvenirs as totems of failed relationships. Love might be fleeting, but those objects—even though some of them are literal trash—provide her with the permanence a relationship might not. It’s an unexpected basis for a rom-com, and Viswanathan throws herself into the material with a dazzlingly infectious energy.

Written and directed by Natalie Krinsky, “The Broken Hearts Gallery” follows 26-year-old Lucy (Viswanathan), who works as an assistant at the prestigious Woolf Gallery in New York City. She idolizes her boss, Eva Woolf (Bernadette Peters), and knows practically everything about Eva’s career and her perspective on art—information Lucy readily provides to her boyfriend and colleague at the gallery, Max (Utkarsh Ambudkar). To her longtime friends and roommates, law student Amanda (Molly Gordon) and model Nadine (Phillipa Soo), Lucy can’t stop gushing (“I just can’t believe he chose little old me,” she says), and she thinks that maybe Max will ask her to move in. Instead, she’s completely devastated when he dumps her and she loses her job on the same night.

In a meet-cute for our current age, a drunk and despondent Lucy plops herself into a stranger’s car, mistakenly believing that it’s her Lyft home, and in the kind of plot twist that could only exist in a rom-com, driver Nick (Dacre Montgomery) indulges her by dropping her off. After that first meeting, the two bump into each other again weeks later. Nick, who has been working on his dream boutique hotel for five years, is out of money and needs help keeping the project going. Lucy, still unemployed, alone, and steadily irritating her friends with her listlessness, is searching for a way to get rid of some of her broken-relationship detritus. In each other, Nick and Lucy sense opportunity: Maybe Lucy, with her art background, could assist with designing the interior of the hotel, and maybe Nick, with all this space on his hands, could house some of Lucy’s exes’ memorabilia.

So is born the Broken Hearts Gallery, a corner of Nick’s hotel where people can drop off the items they’ve clung to long after their romantic relationships have ended. Convinced that “There are broken people out there like me, people that need to let go and move on,” Lucy decides to use the tagline “Leave your heartbreak” to advertise the gallery. The result is a "Humans of New York"-style opportunity for people in the city to connect over shared loss and humanity, and that idea is the film’s freshest—an invitation for viewers to consider similar experiences in their own lives. More traditional to this genre is the resentful-turned-affectionate nature of Lucy and Nick’s relationship: When Lucy calls Nick a hoarder and Lucy calls Nick a pessimist, that’s the kind of competitive banter that we know eventually leads to love!

“The Broken Hearts Gallery” checks off a number of rom-com requirements, from character details like the protagonist’s job in the NYC art world, the composition of her friend group (a weird one and a lesbian one), and her obsession with an unattainable older man, to the setup of certain scenes, like an amorous karaoke performance and a spirited argument about the best way to survive the zombie apocalypse. All of those elements are recognizably familiar, but Krinsky’s script is simultaneously wry and earnest, building inner lives for these characters that feel genuine. Starting the film with a high school flashback helps explain Nadine and Amanda’s tolerance of Lucy’s collecting (“You’re basically an anthropologist … Nothing wrong with being sentimental,” they assure her), and the film spends enough time with the trio to demonstrate the depth of their friendship. Nadine and Amanda know to provide Lucy with a blanket, a box of tissues, a DVD of “Eternal Sunshine and the Spotless Mind,” and a bag of chips with a bottle of ranch dressing once she admits being dumped. They also know to urge her into action after weeks of letting her wallow; “Have you just been masturbating and braiding your hair for three weeks?” is their amazed reaction when they see her messy bed. Krinsky writes the trio with enough specificity to capture shared history and continued loyalty.

All of this is elevated by Viswanathan, whose confident performance makes clear her myriad talents. She was a wise-cracking scene stealer in the sex comedy “Blockers”; communicated great internal struggle as the titular Hala in Minhal Baig’s portrait of a Muslim family; and gave millennials a dogged investigative journalist of their own in “Bad Education.” In “The Broken Hearts Gallery,” her broad smile gives life to zany dialogue like “I love her so much, it gives me diarrhea” (when discussing her respect for her boss) and “I’m in my mid-20s, I barely ever wash my face” (when trying to hold her own against Max’s new girlfriend). As the straight man to Viswanathan’s boundless energy, Montgomery is more controlled and downbeat, and the contrast works. Although certain elements of their bond, like a mutual fondness toward neon signs, feel too intentionally random, Viswanathan and Montgomery are believably comfortable with each other, and that ease underscores their steadily escalating romance.

Putting aside the amusing script and the entertaining cast, there are storytelling elements of “The Broken Hearts Gallery” that are irritatingly trite (including an allusion to a breakup with a certain President of the United States) and other narrative details that needed more time, in particular the root cause for Lucy’s item-gathering. Although the explanation is meaningful, that personality trait is so formative to who Lucy is that its justification could have been expanded into more than one scene. Still, “The Broken Hearts Gallery” is so committed in its empathy toward the unlucky in love, and benefits so much from Viswanathan’s vibrant performance in support of that compassion, that overlooking those flaws—just like rooting for Nick and Lucy—is easy to do. 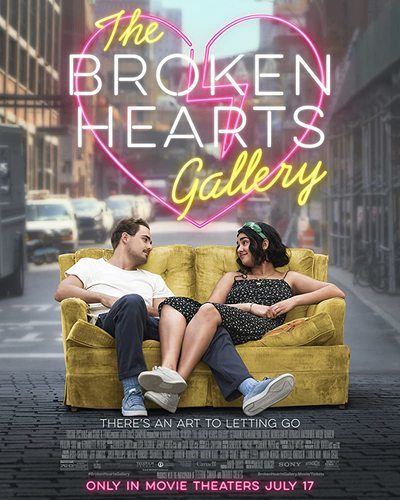