"The Broken Circle Breakdown" opens on a tight shot of a group of down-home, country bluegrass musicians performing "Will the Circle Be Unbroken." They may be "down home"—but not in the country you think. Though their English sounds flawless, they are actually Flemish musicians in Ghent 2006. And that American country classic they're singing? It's actually a religious hymn written by an Englishwoman over a hundred years ago. But the universal landscape circumscribed by that song—a spinning wheel of reason and faith—propels the heartbreaking tale that's about to unfold and the questions it raises: Is there life after death? Will the circle be unbroken?

"The Broken Circle Breakdown" fleshes out a meditation on the answers—to well-deserved acclaim on the international film festival circuit. It's a rich, raw, heartache of a film, a beautifully composed, soul-stirring drama about love, family, sex, sorrow, faith, and music. The movie—in Flemish with English subtitles—is adapted from a play co-written by Johan Heldenbergh who also stars here as Didier—a tall, handsome, soft-spoken bluegrass musician who loves America, the land of the fresh start. Didier falls passionately in love with a beautiful, vivacious tattoo artist named Elise-Veerle Baetens ("Best Actress" for this performance at the Tribeca Film Festival). She has covered her own body with the tattooed symbols of her life, the history of her broken romances etched into her skin. Now, Elise joins Didier's band (the actors do all their own remarkably good singing!), and soon they marry. Together they create a full, real and sensual life, so earthy you can smell the air they breathe. And one day, there are three: Maybelle is born and their little threesome blooms among a warm group of extended family and friends.

Suddenly, their little girl develops a serious illness—and we witness every wrenching twist and turn in this journey. I have never seen a more developed, charismatic, and poignant performance by a child this young in a film. Five year-old Nell Cattrysse plays Maybelle like a little sparkler, the light of her parents' life. She is equally authentic in every moment, happy and sad, a fully realized person onscreen. In fact, director/co-writer Felix Van Groeningen with Carl Joos) has elicited strikingly visceral, detailed performances from all of his actors, as well as an exquisitely tactile world. The intensity of Didier and Elise's lovemaking, as well as the sharp agony on their stricken faces in times of trial, will cut you up. The intimacy of the connection we feel to this family is palpable.

The bluegrass score is gorgeous—old and newly written tunes interwoven as musical interludes punctuating the film's themes. In fact, the film itself is structured like a bittersweet bluegrass song; the movie begins in the middle of Didier and Elise's relationship, then unwinds like a tune circling a recurring refrain, back and forth in time, between present and past, in an ever-widening circumference, deepening our understanding of their inner lives. Gradually we realize that Elise's attraction to the symbolic world, and the scars she wears—will lead her on a collision course with Didier's pragmatism and affinity for the "can do" optimism of America. The climactic crack-up occurs one night, right in the middle of a performance, literally center stage—before a live audience, who sit there aghast and confronted: Is the life we live, see, touch and feel, here and now—all there is? Is religion for cowards? Where shall we put our faith?

It's a wild scene of pain and desperation, and leads to the film's equally shocking and final blessed moments, which take us back to the film's beginning: Didier's band of musicians hovering—sometimes in the background, sometimes nearby—like a cowboy chorus, singing the songs of life, as celebration, as benediction, as commentary, as pure emotional release, singing in the void for all they are worth, singing that somehow we will all get through it —unbroken. 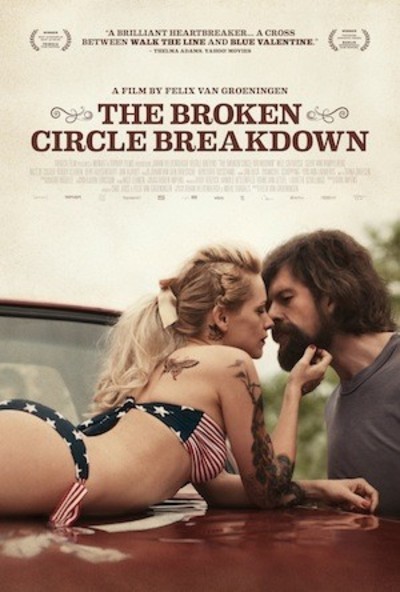