Catherine Deneuve romancing a gorilla. That’s one of the head-scratching curiosities in “The Brand New Testament,” Belgian director Jaco Van Dormael’s goof on the Bible. Is pairing the French screen goddess with the big hairy guy from the zoo a funny conceit? That depends on your sense of humor. For this reviewer, Van Dormael’s film was pure torture from first to last, about as mirthless a comedy as I ever hope to see.

But I’m guessing mine is a minority opinion. The movie was well-received when it debuted at the 2015 Cannes Film Festival and has won “best film” prizes in a number of European film festivals. So presumably some folks find it screamingly funny. All of which underscores the truism that humor is largely subjective.

If ever there was an occasion to lament the star ratings on reviews, this is it. The two stars here are meant to split the difference between my entirely negative opinion of the film—though the project is admittedly very well crafted—and what seems to be the larger consensus.

Understand that my dislike of the film has nothing to do with its quasi-sacrilegious premise. Spoofs of the Good Book are fine by me; they just need to be funny, but Van Dormael (“Toto the Hero”) is no Monty Python or Mel Brooks. He imagines God (played with consummate unpleasantness by Benoît Poelvoorde) as a gross guy who lives in a Brussels high-rise, where he spends most of his time at his computer devising new tortures for the human race. His son, JC, once escaped the household and was killed by the people he meant to help. Now God’s only companions are JC’s little sister, Ea (Pili Groyne), and their mom (Yolande Moreau), a mute presence who devotes much of her time to her collection of baseball cards.

With an altruistic bent much like her brother’s, Ea sees that God’s hold on humanity has much to do with people’s fear of death, knowledge of which He controls. So the girl gains access to Dad’s files and sends text messages to everyone on Earth telling them how much time they have left to live. While this information is generally liberating, people react differently. One young guy, told that he’s got decades to go, gleefully keeps trying to commit suicide but always finds his plans improbably thwarted.

This and other gags are staged with zany acceleration and cartoonish framings of a Mack Sennett slapstick—which no doubt makes them funnier for anyone inclined to laugh in the first place.

Eventually Ea discovers that she can escape her Dad’s oppressive household via its washing machine, and she emerges into Brussels with a mission: find six new Apostles to bring the total to 18. That number is the same as the players on Mom’s favorite baseball team. Why new Apostles are needed was never clear to me, but Ea’s search for them comprises most of the film, making it very repetitive.

Another thing left unclear is what qualifies the people Ea finds for Apostlehood. They are an odd lot. One, for example, is a guy who delights in killing people with his rifle. One day he shoots a woman who’s not fazed by the bullet because she has a prosthetic arm. Amazed, the guy falls in love with her and gives up his wicked ways.

Catherine Deneuve comes into the picture due to Ea’s Apostle hunt. She’s a well-to-do woman in a loveless marriage. Informed of the relatively short time she has left to live, she first hires a teen male prostitute for sex, but he steals her money and bolts. She’s then taken to the zoo, where she develops a crush on an enormous gorilla. Let it be said that Deneuve not only has great beauty but endless dignity; this stupid and farcical situation does nothing to degrade her.

Which can’t necessarily be said for viewers of “The Brand New Testament.” It's doubtless some people will find the film funny and clever. They are welcome to it. 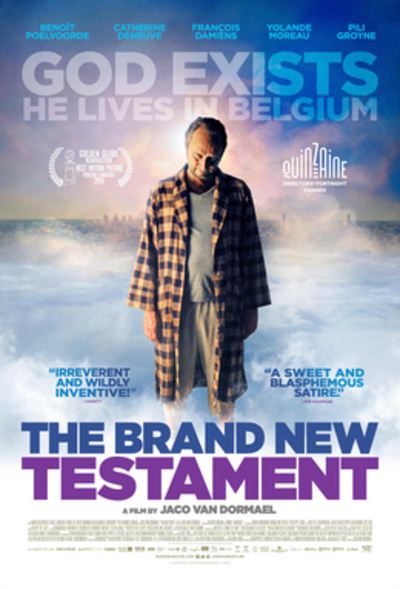