“Mike and Dave Need Wedding Dates” confuses repetitive raunchiness with daring humor. It hammers us over the head with the same handful of jokes in hopes of beating us into submission. And it strains the screen appeal of a group of actors who normally are enormously likable.

The film marks the feature-directing debut of Jake Szymanski, who previously directed several segments for “Saturday Night Live” and online shorts for Funny or Die. He shows some strong instincts at the start as he introduces these characters and sets up this world, but has trouble maintaining the same uproarious energy level for the duration of the film. The script from Andrew Jay Cohen and Brendan O’Brien, co-writers of the similarly no-holds-barred “Neighbors” movies, is loosely based on a series of actual events, which also inspired a book. But very little here resembles anyone or anything you’d recognize in real life.

Brothers Mike (Adam Devine) and Dave Stangle (Zac Efron) really did take out a Craigslist ad to find dates to their cousin’s wedding, and that ad really did go viral. Here, the cousin has been changed to a younger sister, Jeanie (Sugar Lyn Beard), and the wedding has been moved to Hawaii (to up the levels of expectation, ostensibly). In a well-staged opening sequence, which contrasts what Mike and Dave recall as delightful family bonding time with the disastrous reality, we learn why everyone wants these guys to bring nice girls to the wedding. They’re a train wreck, albeit a well-intentioned one.

They meet their matches in trashy best friends Tatiana (Aubrey Plaza) and Alice (Anna Kendrick), who are just as much of a hot mess. Tatiana is the wild-eyed, trash-talking alpha of the duo, while Alice is the sweetly perky yet aimless sidekick still reeling from being jilted at the altar. (We’re forced to watch along with Alice as she tortures herself with multiple viewings of the iPhone video of that tragic moment; the repetitious nature of this early, unfunny gag is a harbinger of things to come.)

Tatiana and Alice see Mike and Dave discussing their search on TV and put down the bong long enough to hatch a plan to meet them “accidentally” outside a Manhattan bar. This requires them to clean up and concoct wholesome back stories for themselves, which amusingly taxes Alice’s ability to tell convincing lies. There is definitely an allure to seeing Kendrick play against type as a bad girl. She was sort of inching in that direction—and away from her prim persona—with the original “Pitch Perfect” movie as a low-key, anti-social DJ. It may not be the most ideal fit for her talent, but it’s still fun to see her stretch.

The scenes in which she and Plaza vaguely try to make something of their lives and/or sit around on the couch, hoping to convince themselves and each other of how awesome they are, are the film’s highlights. Tatiana and Alice are far more compelling than Mike and Dave as they co-opt and upend bro culture. Plaza is game for anything, and these two likable actresses have an easy, zany chemistry with each other.

Then they meet Mike and Dave—and in theory, sparks should fly, because Tatiana and Alice are their female equivalents. But “Mike and Dave Need Wedding Dates” is never nearly as subversive as it thinks it is, and by the end, everyone tones it down and learns to be a grown person. (It’s not exactly a spoiler; these hard-R comedies tend to go soft and gooey by the conclusion.) We’re supposed to find these guys lovable but they’re actually just adolescent idiots, even though Efron andDevine each have been consistently charismatic in the past (with better writing). Devine, the “Workaholics” co-star, works his fast-talking, manic shtick, and Efron continues demonstrating his willingness to toy with his pretty-boy persona the farther he strays from the Disney Channel.

Despite their efforts, “Mike and Dave Need Wedding Dates” offers raunch with no smarts. It’s not content merely to present increasingly shocking sight gags, such as the thoroughly inappropriate massage the bride receives at the resort’s spa from the naked and limber Kumail Nanjiani, a one-note bit that gets dragged out ad infinitum. There’s also the moment when Tatiana reluctantly pleasures the brothers’ bisexual cousin (Alice Wetterlund) in the steam room in exchange for backstage passes to Rihanna (whom the film repeatedly refers to by her nickname, Ri Ri, which is just super edgy). And then there’s the nude, drug-induced incident involving the horses at the resort’s stables.

Showing these events once isn’t enough, though. The movie keeps referring back to them, over and over, as if reminding us about jokes we just saw will make them funny all over again (if they ever were in the first place). Similarly, merely making references to pop culture phenomena does not count as humor, such as an extended (and ill-fated) homage to “Jurassic Park,” or the acknowledgement of this movie's debt to the superior “Wedding Crashers.”

And then there are the outtakes. Good lord, the outtakes. Don’t we all see through these by now? Sure, it’s a clever way to keep us in our seats during the credits instead of running out to the bathroom, but they are never funny. Here, this is especially true. Hearing crew members cackling in the background doesn’t automatically make these moments hilarious. 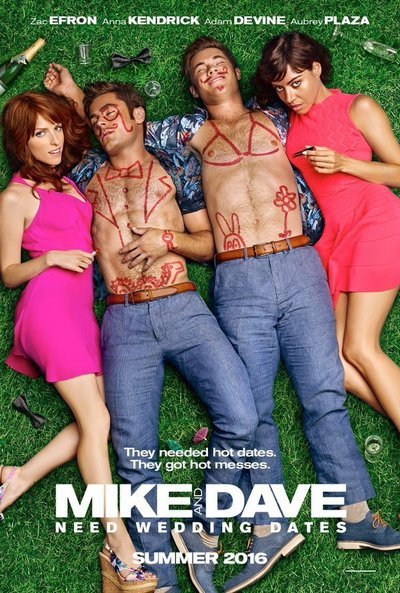 Rated R for crude sexual content, language throughout, drug use and some graphic nudity.