Hello, My Name is Doris

For those of us who really liked—nay, worshipped and adored—Sally Field even before she won a single Oscar, her presence in the modestly conceived but emotionally brimming “Hello, My Name is Doris” is like a beacon of beckoning human warmth just waiting to be cherished.

The 69-year-old actress and former TV “Gidget” not only gets to prove that her superb comedic skills have gotten none the rustier since she was last given a worthy arena to display them. But the fact that Field is doing so in her first leading role in 20 years is on the same level of a cinematic event as Lily Tomlin’s hardcore domination of “Grandma” or Blythe Danner's delicate command of “I’ll See You in My Dreams.”

It’s not that much of an exaggeration to say that her Doris—a 60-ish, never-wed office drone whose sheltered life spent on Staten Island with a fat, lazy cat, a demanding invalid mother and decades of hoarded clutter—is a somewhat spikier but no less sweeter invention in the mode of Charlie Chaplin’s Little Tramp. She even dresses the part in what used to be Salvation Army toss-offs but have since been reclaimed in this age of shabby-chic as vintage wear. We laugh at her foibles, applaud her small victories, agonize over her questionable choices, share her growth pains and allow her to tug on our heartstrings. In a society that too often devalues its older citizenry, Doris’ arrival is as welcome as the first crocus of spring.

If this low-budget indie directed by Michael Showalter, who shares writing credit with Laura Terruso, is somewhat shakier in its plotting than Field is with her choices onscreen, it matters little considering that basically she is the movie. Not that there aren’t a parade of talented younger faces in the cast, most likely eager to share space with the film’s star, including Kumail Nanjiani (“Silicon Valley”), Rich Sommer (“Mad Men”), Natasha Lyonne (“Orange is the New Black”) and Beth Behrs (“2 Broke Girls”).

Neither does it suffer from being a sort of gender-inverted version of the glossier and ultimately shallower “The Intern” with Robert De Niro and Anne Hathaway. While De Niro enhanced his mainstream material by putting aside his usual short-fuse persona to become a gentlemanly fount of wisdom, “Hello, My Name is Doris” has a welcome rawness that partly derives from making do with fewer resources.

The perennially youthful Field’s defiance of stereotypes starts early as she experiences a coming of age and a late-life crisis simultaneously. The film opens with her mother’s funeral, an initially anxiety-inducing event that soon allows Doris to embrace new opportunities, aided by a talk given by a self-help guru (Peter Gallagher in a cameo, offering such cheesy advice as reading “impossible” as “I’m possible”). They soon arrive in the form of John Fremont (Max Greenfield, in a refreshingly kinder and engaging change of pace from his Schmidt on TV’s “New Girl”), her company’s new art director who's about half her age. While forced together in a crowded elevator, a smiling John innocently tells Doris that he likes her fancy cat-eyed specs. That is all it takes to zing her romantic strings and spark a sexual awakening.

Her ploys to entice the unaware John at work fall flat, so she turns to the 13-year-old granddaughter of her outspoken pal Roz (an invaluable Tyne Daly), who helps her create a fake Facebook page so she can virtually stalk him. Doris learns John likes an electro-pop band named Baby Goya and the Nuclear Winters and arranges to attend a concert at a Williamsburg club with him. With her neon yellow coveralls, tacky Vegas visor, messy ‘60s beehive and unfiltered reactions prove to be a hit with the millennial crowd, who adopt her as a kind of mascot. Baby Goya himself (Jack Antonoff of the band fun.) beckons her backstage, pronounces her “cool” and asks her to pose for his next album cover. This is a narrative stretch, of course, but it is a pleasure to watch. Alas, it turns out John has a girlfriend, a turn of events that causes Doris to resort to misguided measures.

Field knows how to milk such scenes as when Doris tricks John into re-inflating the exercise ball she is forced to sit upon at her desk for a quick thrill or when she bounces around like a giddy dervish to her first exposure to electronica music. But she truly excels at digging deeper, such as the quieter moment when she tells John about how her long-ago engagement that failed to lead to marriage or the long-gestating outburst where she blasts her selfish brother and shrewish sister-in-law (Stephen Root and Wendi McLendon-Covey, both terrific) for taking advantage of her.

Some might dismiss this tale of a blooming wallflower as simply a manipulative twee fantasy. But for those of us who trust in Field, this film will have us at “Hello.” 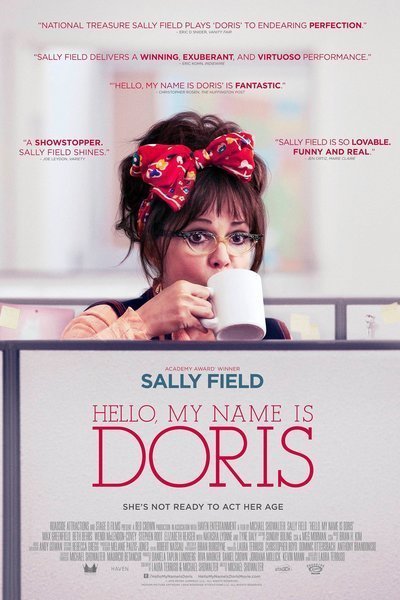