“Trainwreck” is the first Judd Apatow movie that’s made me cry. I’m just gonna put that out there. We’re all friends here.

The man who made his name a decade ago with the megahit raunchy bromances ‘The 40-Year-Old Virgin” and “Knocked Up” has shown a softer side recently with the more earnest (and less successful) “Funny People” and “This Is 40.” Here, he’s made his most emotionally vulnerable film yet, with a deft balance of bawdy humor and blossoming heart.

It probably helps a great deal that this is the first movie Apatow directed but didn’t write. Perhaps there’s more of a system of checks and balances than we’ve ever seen before. “Trainwreck” is the first screenplay from the film’s star, Amy Schumer, who brings much of the irreverent vibe of her stand-up routine and her Comedy Central series, “Inside Amy Schumer,” to the big screen. Nothing is off limits. Nothing is too intimate or inappropriate. And no one escapes criticism, especially not herself.

The hugely likable actress further hones her slyly deadpan, brash style. As in her stand-up work, she’s never afraid to look foolish, from awkward sexual encounters to projectile vomiting to working up a sweat performing a complicated dance routine. But she also gets the chance to show real range here in several genuinely poignant scenes, including some beautiful and tender work with Bill Hader as her unlikely boyfriend and Colin Quinn as her unfiltered father.

The film begins in snappy, brisk fashion in a flashback, as young Amy and her little sister are receiving some tough-love advice from their dad, who’s just informed them that he and their mom are divorcing: “Monogamy isn’t realistic.” Twenty-three years later, those three words remain her mantra. She sleeps with whomever she wants, whenever she wants, but they don’t get to sleep over. Outwardly, she radiates confidence, accomplishment and happiness. There will be no slut-shaming here. But she’s also a bit of a mess; in true Apatowian fashion, Amy wallows in the throes of arrested development, and she may have a teensy drinking problem.

But then she gets an assignment from her editor at “S’Nuff,” the stereotypical, dude-bro-party magazine where she works, to write a story about a Manhattan sports doctor who treats the nation’s top athletes. (A tan and fiercely eyelinered Tilda Swinton is unrecognizable as the blonde, mod goddess who’s Amy’s coldly driven boss. She provides an intriguing counterpoint to Schumer’s character as a strong, independent woman who’s also unapologetically unlikable.)

Her first meeting with Hader’s sweetly geeky Aaron Conners looks like it’ll be all business—Amy knows nothing about sports and can’t be bothered to pretend—but later that night, dinner leads to drinks and more, much more than she’d ever allowed herself to consider.

And so this is the central conflict of “Trainwreck”: Does Amy adhere to her long-held notions of resisting monogamy, or does she allow herself to give into the possibility of something truly new and scary? It’s a familiar rom-com dynamic, but the reversal of traditional on-screen gender roles—combined with Schumer and Hader’s easy chemistry—makes “Trainwreck” feel new and fresh.

Hader is surprisingly convincing as a romantic lead, even though he’s playing a character who isn’t exactly suave in sweeping her off her feet. There’s a deeply decent quality about him here reminiscent of a young Jack Lemmon, which is hugely appealing in its own way. He is guileless. He is everything she’s never had in a man before, and everything she’s never been herself. On the heels of his powerfully dramatic performance in last year’s great indie “The Skeleton Twins,” it’s a thrill to see this “Saturday Night Live” alum find so many varied opportunities to spread his wings and show his range. He still gets to be funny, but in a much more understated way.

“Trainwreck” mostly has great energy as it bops along, revealing their burgeoning relationship and even acknowledging the hackneyed nature of the falling-in-love montage. Dave Attell is a welcome and frequent sight as the homeless man who stands on Amy’s corner, heckling passers-by and serving as the movie’s de facto Greek chorus. But like all Apatow movies, “Trainwreck” is overlong and features moments that clearly could have (and should have) been cut for a stronger, tighter final product, especially in the sluggish last third.

As Aaron’s star patient and best friend, LeBron James is kind of wonderful playing a version of himself who’s sensitive, analytical and strangely stingy. It’s an inspired casting choice. But a scene in which he, Chris Evert, Matthew Broderick and Marv Albert stage a middle-of-the-night intervention to help Aaron mend his broken heart grinds the movie’s momentum to a halt. It’s never as clever or funny as it aims to be; at the same time, Apatow may have felt that all these celebrities went to the trouble to shoot the scene, so how could he leave it on the cutting room floor? Similarly, a late moment involving Amy and Ezra Miller as the magazine’s eager intern feels weird and out of place.

Ultimately, “Trainwreck” isn’t as quite as subversive as it suggests at the outset. The grand finale is extraordinarily cheesy, albeit in a self-aware and entertaining way. But the movie finds its own place of peace, on its own terms, and every bit of it is earned. Don’t be ashamed if you find yourself getting a little choked up, too. 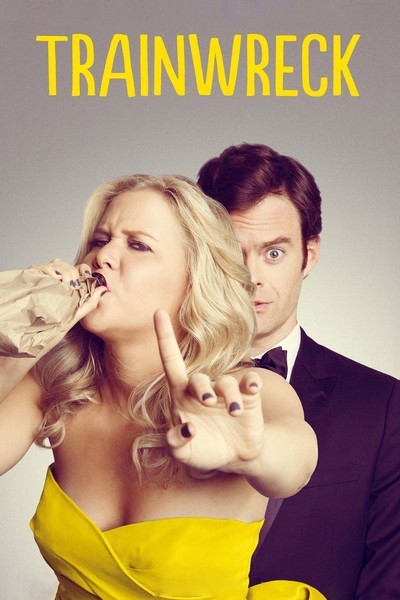 Rated R for strong sexual content, nudity, language and some drug use

Daniel Radcliffe as The Dogwalker

Marisa Tomei as Herself