"The BFG" remembers what it's like to see with the eyes of a child. The ideal age for it is somewhere between five and nine—a time when kids ask basic, very practical questions about the stories adults tell them at bedtime, like "Are Sophie's glasses OK?"

Sophie (newcomer Ruby Barnhill) is the heroine of "The BFG," Steven Spielberg's film of Roald Dahl's novel. It's about a London orphan who gets kidnapped by The Big Friendly Giant, or BFG (Mark Rylance, in the first motion-capture performance to equal Andy Serkis' best) and whisked away to the land of the giants. The BFG is indeed friendly—befuddled and a bit sad, but nice. But there are other giants here. They're scary, stupid bullies, and so big that they tower over the BFG the way he towers over Sophie. They love to eat people, whom they call "human beans," or simply "beans." When Sophie hides from the bigger giants and they clomp around looking for her, the first thing the BFG does is find Sophie's glasses and hide them in his pocket. He does it so that the bigger giants won't see them and know for sure that he's hiding a child, but there's a more basic motivation: to prevent them from getting crushed. "Do you have my glasses?" she asks him late in the film, during another action scene. "Of course," he says.

The movie is filled with gestures that meaningful. Like the BFG, it cares about the little things, and it moves with a grace that belies its size. It's a film about about dreaming and storytelling, parenting and childhood, nostalgia and pragmatism, and the necessity of standing up for yourself even when you know you can't win. But most of all, it's a film about two unlikely friends.

There's a little bit of plot, mostly having to do with how the BFG will deal with the really big giants who scare him and call him "runt"; this stuff resolves itself so quickly that it's as if the story realized it was getting late and the kids needed to get to sleep. The movie is less interested in twists and turns than in watching the giant and Sophie interact. It's the kind of film that pauses to let characters tell each other stories and that recounts a dream by throwing shadows upon a wall. There are fart jokes, but unlike most movie fart jokes, they're not crudely desperate. They're joyously strange in that Roald Dahl way, and they don't just happen when a scene needs, well, gas; the movie builds toward them patiently, the better to keep kids on the edge of their chairs waiting for that first flap-flap sound.

I can imagine a some adults finding the movie dull; "Nothing happens," they'll say. "And it's too nice." But I can imagine other adults loving the film for helping them  remember what it's like to be young enough to hide from a movie monster because he's big and weird-looking and then laugh because he's kind of silly, or to want a conversation between the BFG and Sophie to go on a bit longer because the giant has a funny voice and a funnier walk (he lifts each leg as if it's heavier than it is—as if he's a real giant, not a runt).

The giant keeps dreams in jars. Some are good dreams. Others are scary. The giant doesn't want Sophie to experience the scary dreams, not because there are monsters in them (though sometimes there are) but because they say hurtful things to the dreamer. The giant can be lyrical and inspiring, especially when he talks about how he loves the land and tries to listen to it. "The funniest stories I hear are from the trees themselves," he tells Sophie. "All the secret whispers of the world." But most other times he garbles ordinary words into malapropisms: "Feature of habit." "De-lumptious."

The movie is never too exact about its meanings; they're fluid, changing to reflect a given situation. That means the giant can be an adult who has brought a child into his world and is scared she might die because of something he did, or failed to do. But he can also be a child who lets himself be mothered by Sophie, a kid who was forced to grow up too fast. From a distance, the shambling, silver-haired BFG often suggests a doting but scatterbrained grandfather. The bigger giants in the land of the giants stalk around like irresponsible, petty, volatile parents who have no idea how to give or accept love because they never learned how. (The BFG tells Sophie that giants don't have parents.)

Most scenes in "The BFG" take their time unfolding. Many consist of Sophie and the BFG talking as real friends might. Some are scored with John Williams' default "Isn't this a marvelous adventure?" music, which slightly dulls their sense of wonder, but others are so quiet that you can hear insects whirring and the wind moving through the grass. During action scenes, Spielberg doesn't hammer your eyeballs with fast cuts to keep you interested; he stages a lot of the conversations in long takes and keeps the camera far back, the better to allow you to appreciate the way the characters move through the frame, how they carry themselves, what they do with their hands. Close-ups are doled out sparingly, to amplify emotional moments or  deliver the punchlines to comic ones, as when the giant eats a meal prepared by humans and Spielberg cuts to a shot of the utensils they've provided: a sword, a pitchfork and a shovel.

Every few seconds there's an image that delights for delight's sake, such as the way the giant, sneaking out of London at night with Sophie hidden in his satchel, uses his wits and the wings of his long coat to camouflage himself: assuming the silhouetted shape of a tree; leaning back into the dark hollows of a building while covering a streetlight bulb with his hand. Spielberg and his regular cinematographer, Janusz Kaminski, have an eye for bold graphic images: the giant's reflection seeming to stand upside-down on the bank of a lake he's just dived into; one of the bigger giants shielding himself against rain by hoisting up a human-sized umbrella; the BFG striding through a  "gate" that marks the border of the land of giants: a zigzag rock formation, crooked like a swimmer's elbow.

This is a kind-souled movie about kind souls. Sophie's glasses make it through just fine. 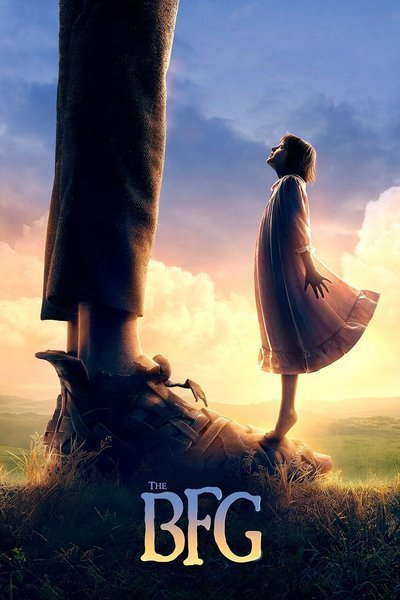 Mark Rylance as The BFG

Penelope Wilton as The Queen