Matt Reeves’ “The Batman” isn’t a superhero movie. Not really. All the trappings are there: the Batmobile, the rugged suit, the gadgets courtesy of trusty butler Alfred. And of course, at the center, is the Caped Crusader himself: brooding, tormented, seeking his own brand of nighttime justice in a Gotham City that’s spiraling into squalor and decay.

But in Reeves’ confident hands, everything is breathtakingly alive and new. As director and co-writer, he’s taken what might seem like a familiar tale and made it epic, even operatic. His “Batman” is more akin to a gritty, ‘70s crime drama than a soaring and transporting blockbuster. With its kinetic, unpredictable action, it calls to mind films like “The Warriors” as well as one of the greatest of them all in the genre, “The French Connection.” And with a series of high-profile murders driving the plot, it sometimes feels as if the Zodiac killer is terrorizing the citizens of Gotham.

And yet, despite these touchstones, this is unmistakably a Matt Reeves film. He accomplishes here what he did with his gripping entries in the “Planet of the Apes” franchise: created an electrifying, entertaining spectacle, but one that’s grounded in real, emotional stakes. This is a Batman movie that’s aware of its own place within pop culture, but not in winking, meta fashion; rather, it acknowledges the comic book character’s lore, only to examine it and reinvent it in a way that’s both substantial and daring. The script from Reeves and Peter Craig forces this hero to question his history as well as confront his purpose, and in doing so, creates an opening for us as viewers to challenge the narratives we cling to in our own lives.

And with Robert Pattinson taking over the role of Bruce Wayne, we have an actor who’s not just prepared but hungry to explore this figure’s weird, dark instincts. This is not the dashing heir to a fortune prowling about, kicking ass in a cool costume. This is Travis Bickle in the Batsuit, detached and disillusioned. He’s two years into his tenure as Batman, tracking criminals from on high in Wayne Tower—an inspired switch from the usual sprawl of Wayne Manor, suggesting an even greater isolation from society. “They think I’m hiding in the shadows,” he intones in an opening voiceover. “But I am the shadows.” In the harsh light of day, Pattinson gives us hungover indie rock star vibes. But at night, you can see the rush he gets from swooping in and executing his version of vengeance, even beneath the tactical gear and eye black.

As he’s shown in pretty much every role he's taken since “Twilight” made him a global superstar in 2008, working with singular auteurs from David Cronenberg to Claire Denis to the Safdie brothers, Pattinson is at his best when he’s playing characters who make you uncomfortable. Even more than Christian Bale in the role, Pattinson is so skilled at making his beautiful, angular features seem unsettling. So when he first spies on the impossibly sexy Zoe Kravitz as Selina Kyle, slinking into her leather motorcycle gear and shimmying down the fire escape in her own pursuit of nocturnal justice, there’s an unmistakable flicker of a charge in his eyes: Ooh. She’s a freak like me.

Pattinson and Kravitz have insane chemistry with each other. She is his match, physically and emotionally, every step of the way. This is no flirty, purring Catwoman: She’s a fighter and a survivor with a loyal heart and a strong sense of what’s right. Following her lead role in Steven Soderbergh’s high-tech thriller “Kimi,” Kravitz continues to reveal a fierce charisma and quiet strength.

She’s part of a murderer’s row of supporting performers, all of whom get meaty roles to play. Jeffrey Wright is the rare voice of idealism and decency as the eventual Commissioner Gordon. John Turturro is low-key chilling as crime boss Carmine Falcone. Andy Serkis—Caesar in Reeves’ “Apes” movies—brings a paternal wisdom and warmth as Alfred. Colin Farrell is completely unrecognizable as the sleazy, villainous Oswald Cobblepot, better known as The Penguin. And Paul Dano is flat-out terrifying as The Riddler, whose own drive for vengeance provides the story’s spine. He goes to extremes here in a way that’s reminiscent of his startling work in “There Will Be Blood.” His derangement is so intense, you may find yourself unexpectedly laughing just to break the tension he creates. But there’s nothing amusing about his portrayal; Dano makes you feel as if you’re watching a man who’s truly, deeply disturbed.

This is not to say that “The Batman” is a downer; far from it. Despite the overlong running time of nearly three hours, this is a film that’s consistently viscerally gripping. The coolest Batmobile yet—a muscular vehicle that’s straight out of “Mad Max: Fury Road”—figures prominently in one of the movie’s most heart-pounding sequences. It’s an elaborate car chase and chain-reaction crash ending with an upside-down shot of fiery fury that literally had me applauding during my screening. During a fight at a thumping night club, punctuated by pulsating red lights, you can feel every punch and kick. (That’s one of the more compelling elements of seeing this superhero in his early days: He isn’t invincible.) And a shootout in a pitch-black hallway, illuminated only by the blasts of shotgun fire, is both harrowing and dazzling. Greatly magnifying the power of scenes like these is the score from veteran composer Michael Giacchino. Best known for his Pixar movie music, he does something totally different with “The Batman”: percussive and horn-heavy, it is massive and demanding, and you will feel it deep in your core.

Working with artists and craftspeople operating at the top of their game, Reeves has made a movie that manages to be ethereal yet weighty at the same time, substantial yet impressionistic. Cinematographer Greig Fraser pulls off the same sort of stunning magic trick he did with his Oscar-nominated work in Denis Villeneuve’s “Dune”: Through pouring rain and neon lights, there’s both a gauziness and a heft to his imagery. His use of shadow and silhouette is masterful, and does so much to convey a sense of foreboding and tension. I could write an entire, separate essay on the film’s many uses of the color red to suggest energy, danger, even hope. And the costume design from the great Jacqueline Durran—with Dave Crossman and Glyn Dillon designing Pattinson’s rough-and-tumble Batsuit—put just the right finishing touch on the film’s cool, edgy vibe. 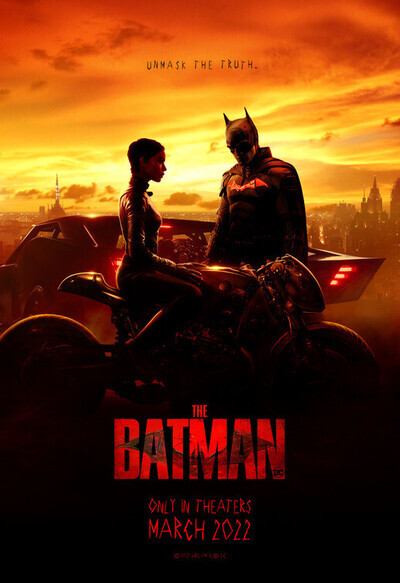 Paul Dano as The Riddler

Colin Farrell as Oz / The Penguin