There's darkness that is moody and effective. And then there is incompetent darkness where you can barely see what is going on. "The Bag Man", helmed by first-time director David Grovic, features darkness of the latter kind. Watching "The Bag Man", if nothing else, gives you a heightened appreciation of the lighting designers in the 1940s and 1950s, who were able to fill those noir screens with encroaching shadows, creating a palpable sense of impending doom, while never sacrificing clarity of image. "The Bag Man" is so sloppily executed it feels like they didn't have enough light fixtures to get the effects they wanted. But that's only one of the problems. The acting is fine. The story is pretty stock, but there's no shame in a stock story. The main issue is the script (co-wirtten by Grovik and Paul Conway), which is too clever for its own good, giving an impression of being very pleased with itself. Quentin Tarantino's scripts burst onto the scene in the early-1990s with a fresh voice and a fresh point of view, adding layers of irony and post-modern awareness to what were well-known cinematic tropes. Grovic tries to place his film in the same bucket but it suffers in comparison.

John Cusack plays Jack, a hired gun, on the run from a shady past, involving an ex-wife who was murdered after they had an argument about his job. Robert De Niro plays a heavy named Dragna, who hires Jack to transport a mysterious black leather bag for him. Jack is warned over and over again to not look in the bag. The job is simple on the face of it: retrieve the bag, go to a specific motel, and wait in Room 13 for further instructions. Things go south almost immediately, of course, and the situation is exacerbated by the fact that the motel Jack is told to check into is, bar none, the creepiest motel in the history of America. Run by a wheelchair-bound paranoid guy played by Crispin Glover, who (shades of "Psycho") has a dead mother, the motel is populated by a motley crew of violent misfits, including a pimp with an eye patch, a cackling, evil Serbian-Roma dwarf in a tracksuit, and a leggy, blue-wigged hooker named Rivka (Rebecca Da Costa), who says she's from Israel even though she isn't: "I like Israel. I love Israel."

Rivka latches herself onto Jack, hiding in his room from the pimp and the dwarf, who threaten to do horrible things to her when they retrieve her. Violence against Rivka is used as a motivating plot-point throughout, one of the script's more unsavory aspects. Later, when Jack and Rivka are hauled into a creepy police station for questioning and torture, Rivka lies mostly naked on a nearby table with one of the cops teasing at her panties with a threatening baton, and the Sheriff says to Jack, in an eyeroll of a line, "If you send us on some kind of wild goose chase, we will take liberties with the girl." The script keeps circling back over the same territory, lacking urgency or a push forward. Lines are repeated in a way that gives an impression of a script spinning its wheels.

Robert De Niro's Dragna is a dude who wears plaid jackets, thick glasses, and his grey hair in a swoopy high pompadour. He is seemingly mild-mannered, and confesses that he wanted to go into "academia", but we know he is capable of violence; we see it early on. He courts Jack for the job by taking him for a flight in a gleaming private jet, carefully cutting his food up to demonstrate what he wants Jack to do: The broccoli is the money, the potato is the bag, etc. Dragna says things like, "I am a connoisseur of the unexpected but I don't like surprises." De Niro plays these ridiculous lines well, undercutting the script and underplaying, which is really the only way to go. Dragna comes off as a truly loopy individual, urging Jack to read Hermann Hesse's "Magister Ludi" before taking the job, and asking him later if he has read the book. The book might help Jack understand the game. Because it's all a game, after all.

And maybe that's the problem. "The Bag Man" feels like a game. The stakes are seemingly high, but not really. Will Jack look in the bag? What do you think? Will Rivka turn out to be more than she says she is? What do you think? Even the big reveals, about the bag, and about Rivka, are handled in such a cliched manner that they lack the "Keyser Söze" gasp of understanding they seem to require. We've seen it all coming. We've seen it before. 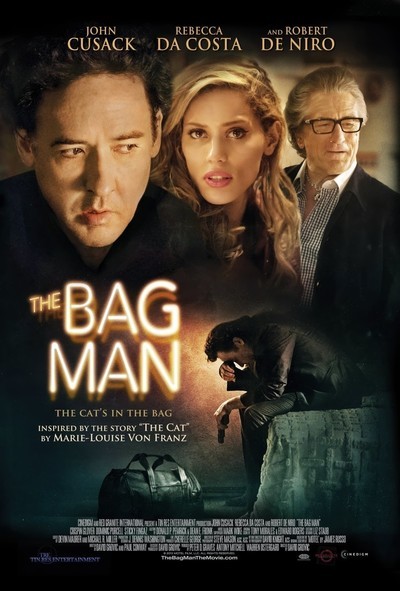