John Butler’s "The Bachelor Weekend" is a genial comedy with likable enough characters to get one through its modest running time and meager intentions but it succumbs to a few too many clichés and paper-thin characterizations to fulfill its potential. Worst of all, it allows one larger-than-life character to steal too much focus and drag the narrative into a predictable arc we've seen so many times before: the boorish lout who breaks the more docile types out of their shells. There are emotional moments that are surprisingly effective (mostly thanks to the talents "Sherlock" star Andrew Scott), a few good laughs, and hints at the film that could have been with just a few rewrites. It’s not quite a "lost" weekend, merely misplaced.

More accurately known as "The Stag" overseas, "The Bachelor Weekend" stars Hugh O’Conor as Fionnan, the kind of sensitive groom-to-be who makes dioramas of his reception and serves as the main contact for the event’s florist. Even the wedding planner calls him metrosexual. His fiancée Ruth (Amy Huberman) asks Best Man Davin (Andrew Scott, Moriarty from "Sherlock") to organize a "stag." Fionnan, Davin, and their best friends will hike the great outdoors, getting in touch with nature and themselves. Travelers include Fionnan’s brother "Little Kevin" (Michael Legge), Kevin’s partner "Big Kevin" (Andrew Bennett), and friend Simon (Brian Gleeson). Of course, they all have a bit of drama to explore on their journey. Kevin’s father refuses to attend Fionnan's wedding if his son’s partner is there. And Simon is undergoing serious financial difficulties that have plunged him into depression.

While you might think there’s enough movie there, Butler throws a powder keg into the campfire by introducing "The Machine" (Peter McDonald), Ruth’s obnoxious, loud, possibly crazy brother. The Machine forces his way on the stag, despite having nothing in common with Fionnan and his mates. He threatens to destroy the whole adventure (and, for a time, the whole movie). Of course, anyone who’s ever seen a film can tell you that there’s more to The Machine than he lets on and that he’ll help pull these gentlemen out of their shells whether they want to step out or not.

There are times when Butler’s sweet, character-driven comedy works, such as an argument about U2 in which The Machine literally can’t believe that there’s an Irishman who didn’t cry at their concert, a very funny bit about how Davin feels that Fionnan only likes things after he does so first, and a musical interlude around the bonfire. "The Bachelor Weekend" is a screenwriting tug-of-war. Every moment that feels character-driven is off-set by one that feels forced. If McDonald isn’t pushing the overbearing Machine routine (which, to be fair, isn’t the actor’s fault but Butler’s script), the characters are going through too many predictable revelatory moments, especially in the last half-hour (the treacly piano keys kick in at almost exactly the hour mark). "The Bachelor Weekend" is at its best not in its scenes of men acting like children or the beats that feel more written than organic but in its most believable scenes of joyful, male friendship in between the broad humor and melodrama. I just wish there were more of them. 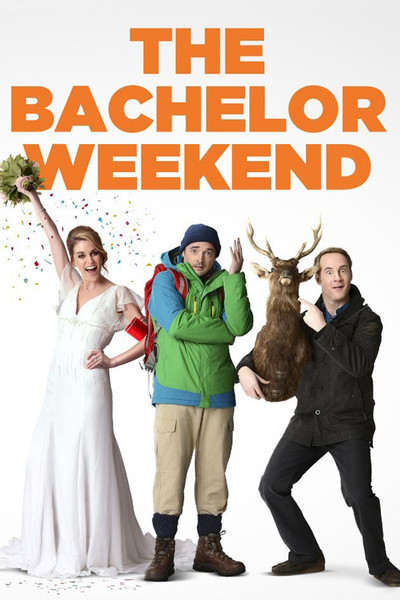 Peter McDonald as The Machine