The Autopsy of Jane Doe

A very good year for horror films has one more scary story to haunt your dreams, the effective and creepy “The Autopsy of Jane Doe.” Like many of the great horror films of 2016, André Øvredal’s thriller marries its concept to solid, character-driven work from the film’s leads. As horror has become one of the best ways for indie filmmakers to tell personal stories, the emphasis on performance has gone up, leading to great acting turns in films like “The Witch,” “I Am the Pretty Thing That Lives in the House,” “Don’t Breathe,” among others. The concept of “The Autopsy of Jane Doe” would make for a great ghost story around the campfire, but it’s the dedicated work by Emile Hirsch and Brian Cox to ground the flick that makes it truly effective.

The actors play a father and son who work at one of the most inherently creepy places one could work: a morgue. The opening scenes beautifully set the tone. The two men are playful with each other, but it’s clear that the elder is the knowledgeable one, and his kid is new to the game. Fans of shows like “Forensic Files” and “Autopsy” will immediately take to the idea that these two can read a story from a body.

So what story is Jane Doe going to tell them? The film actually opens in one of its only scenes outside of the morgue, as the cops investigate a house full of brutally murder bodies. There’s a dead family in pieces everywhere, but the weirdest thing they find is the naked woman half-buried in the basement. While everyone else is a bloody mess, she doesn’t have a scratch on her. How did she die? Who is she? She ends up on our coroners’ table and starts to tell her story. Internally, she’s an absolute disaster. It looks like she was bound and tortured before she died. Her tongue was cut out. She was burned at some point. But her exterior remains intact. Spotless even. And then things start to get really weird.

The director of the cult hit “Troll Hunter” works wonders in the fantastic first hour. He sets up some beautifully realized devices, such as when Cox explains how they used to tie a bell to dead bodies just to make sure they were actually dead instead of in a coma. Any horror fan will laugh, as we’re all well aware that a tinkling bell will play a creepy role about 30 minutes later. It’s a wonderful device, like when a haunted house movie lets us see the creaking door during daylight before it creaks on its own at night. And the first and second act here have a wonderful set-up/pay-off structure to them. As we start to figure out who Jane Doe is, the tension rises and the creepiness increases. “The Autopsy of Jane Doe” is basically a great haunted house movie—the house just happens to be the morgue. And, again, one can’t undervalue having two strong actors like Hirsch and Cox to sell what this movie is trying to sell. They make the unbelievable feel genuinely terrifying.

This holds true for about an hour of the 86-minute running time and then “Jane Doe” turns up the crazy factor and races to a conclusion that doesn’t allow much for character or logic. It’s not uncommon for a horror movie to be more effective in its set-up than its climax. A whispered boo is much scarier than a scream in your face. Luckily, that first hour of “The Autopsy of Jane Doe” is so clever and well-done that it makes the sins of the finale easy to forgive. 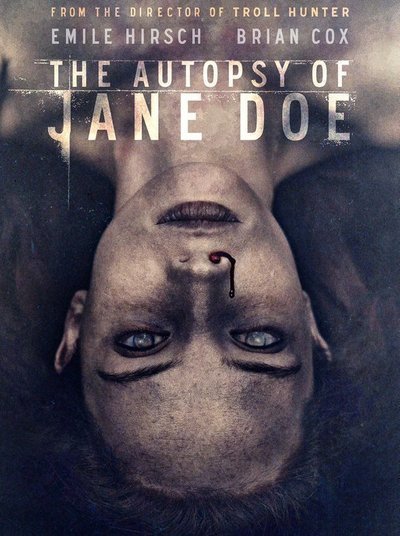