The Art of Racing in the Rain

I have eaten stacks of pancakes that were less syrupy than "The Art of Racing in the Rain." It is the third and least effective narrated-by-a-dog movie of the year, and that does not include the animated "The Secret Life of Pets 2," another look into the inner thoughts of our companion animals.

More pretentious and less effective than "A Dog's Way Home" and "A Dog's Journey," this film also gives us the human world through the eyes, nose, and sometimes wise, sometimes imperfect understanding of a devoted canine. It is based on the best-seller by filmmaker and race car driver Garth Stein and its aspirations are self-consciously literary. The narration is flowery, whether the topic is the world as perceived by a dog or his dreams—of auto racing and of being truly human. This dog wants to have a tongue that can speak, thumbs that can grasp, and a very, very fast car he can drive.

The dog in this story is Enzo, named for Enzo Ferrari, a race car driver and founder of the automobile company, voiced with the husky gravel of Kevin Costner. Aspiring  Seattle-based race car driver Denny (Milo Ventimiglia) adopts Enzo as a puppy and he remains Denny's most loyal companion as the household expands to include Denny's girlfriend and then wife Eve, played by Amanda Seyfried and their daughter Zoe (Ryan Kiera Armstrong). "I'm not much of a dog person," Eve says warily when she first sees Enzo. "He's more person than dog," Denny tells her. Enzo thinks so, too. And Eve comes to love Enzo, who is at first wary and a bit jealous of "the attention he lavished on her with her opposable thumbs and plump bottom," but who comes to love Eve, too. And when Zoe arrives, he is immediately protective and utterly devoted.

Enzo loves to watch car racing, on television at home with Denny, who also reviews his own "in-car" recordings to help improve his performance. Sometimes he gets to go to the track, where he finds the smells and energy intoxicating. He listens carefully to the koan-like maxims of racing: "The car goes where the eyes go." "No race was ever won on the first corner, but many have been lost there." "There is no dishonor in losing the race. There is only dishonor in not racing because you are afraid to lose." And especially: "That which we manifest is before us; we are the creators of our own destiny." He tells us that what was once said about another driver is true of Denny, who is particularly expert in racing when the weather gets bad: "When it rains, it does not rain on him." This dog is a canine Marianne Williamson version of a fortune cookie maxim. Plus poop humor.

Enzo witnesses family stress, conflict, and tragedy, and does his best to help. He is the first to know when a member of the family gets cancer because he can smell it. He barks to bring help when someone is in danger and he takes dog-style revenge on someone who wants to separate Zoe from her father.

The appeal of these films is easy to understand. We cannot help wondering about these creatures who live with us, who observe the most intimate details of our lives, who love us so unconditionally, who comfort us so compassionately, who seem to have no other purpose but to be our companions. It does not take much imagination to think of their simplicity as understanding deeper than our own. If loving and being loved (plus being fed) is their purpose, then perhaps that is true.

Anyone who cherishes a dog will be drawn into this story, and even the most hard-hearted will be moved by the dog's devotion and the grief of the humans around him. But the narration that might feel poetic as we read can seem gratingly pretentious when spoken aloud while it is acted out. The storyline relies on the built-in emotion pet lovers will bring to it and the soapy details of Denny's struggles and loss. Only the most sentimental pet lovers will be able to get past the self-indulgent pretentiousness of the narration, and even they may find it troubling to be told a dog's highest purpose is to become human. We know very well that opposable thumbs and being able to drive are fine, but they can't compare to the true-heartedness that dogs bring to the humans lucky enough to be loved by them. 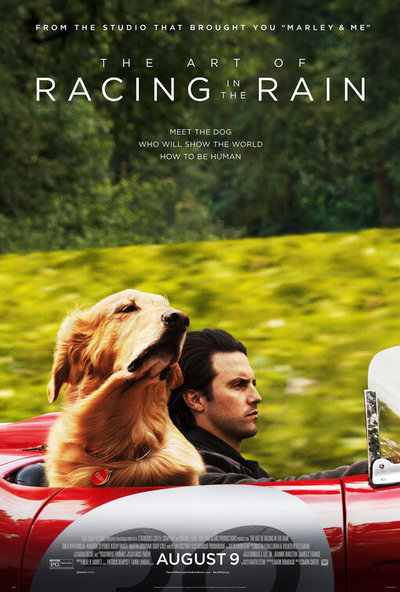