The Secret Life of Pets 2

"The Secret Life of Pets 2” proves the old adage that you can go to the well—or in this case, the dog bowl —one time too many. And that’s saying something, given that this is only the second film in the series.

The original “Secret Life of Pets” from 2016 was similarly slight but consistently amusing. It tapped into the notion that surely every pet owner—excuse me, human companion—has contemplated at one time or another: What do our furry friends do all day while we’re away? It is an incredibly simple yet irresistible idea for a movie. It’s “Toy Story,” with animals. Still, the voice cast was so strong, the adventures were so playful and the animated character design had such oddball appeal (as is always the case with Illumination Entertainment productions) that it was a delightful experience all around for the whole family.

“Pets 2,” however, is woefully thin. It actually feels like the nuggets of ideas for three individual shorts, awkwardly stitched together and stretched out to feature length. Eventually, the story lines meet up in the service of a banal message about bravery, but by then the strain has long since been apparent.

This time, the always-reliable Patton Oswalt takes over for Louis C.K. (whose career has declined in the wake of multiple masturbation allegations) as the voice of Max, a terrier mix living blissfully in New York City with his owner, Katie (Ellie Kemper), and fellow rescue mutt, Duke (Eric Stonestreet). Among the many returning neighbors of various species and breeds are Kevin Hart’s hopped-up bunny, Snowball, who now fancies himself a superhero; puffy Pomeranian Gidget (Jenny Slate, adorable as ever), who still secretly pines for Max; and portly cat Chloe (the scene-stealing Lake Bell), who keeps everyone on their toes with her passive-aggressive antics.

But when Katie gets married and has a baby, Max’s life gets turned upside down. And here’s one of the few emotionally truthful themes veteran Illumination director Chris Renaud, co-director Jonathan del Val and returning writer Brian Lynch explore: the complications that arise when a newborn arrives in the home, causing confusion for pets. Suddenly, they must share with this tiny person all the love, attention and playtime they’d enjoyed exclusively. Touchingly, though, Max evolves into a protector for young Liam (Henry Lynch) as he grows up and toddles off to pre-school – that is, until Max’s instincts turn neurotic and obsessive.

This is just one of the stories “Pets 2” follows as Max, Duke, Liam and the grown-ups take a road trip to the country for a getaway—and ostensibly to introduce an entirely new variety of talking farm animals. They include Harrison Ford—surprisingly, in his first voice-acting role—lending his sardonic growl as the elder-statesman herding dog Rooster. But back home in Manhattan, a no-nonsense Shih Tzu named Daisy (welcome addition Tiffany Haddish) has tasked Captain Snowball, as he calls himself, with rescuing a tiger cub from the clutches of an evil circus master (Nick Kroll doing a thick Russian accent). And at the same time, Gidget must retrieve Max’s favorite squeaky toy—which he asked her to guard while he was away—after it accidentally bounces into the chamber of horrors that is the nutty cat lady’s apartment downstairs.

It’s a lot all at once, and it only intermittently works. The sequence in which Chloe teaches Gidget how to behave like a cat to sneak her way into the felines’ den provides several laughs, thanks to Bell’s delivery and the pointed observations it makes about wantonly destructive cat behavior. (The bizarro vibe that permeates this plotline makes it the most compelling of the three, although it mines the same ideas we saw in the first film about Gidget being more powerful and resourceful than her dainty looks would suggest.) There’s a running bit in which a deranged turkey stalks Max throughout the farm, which is good for a giggle the first couple times but fizzles with repetition. And while Hart and Haddish enjoy a lively, sparky banter, the vicious and violent situations they find themselves in ultimately leave a sour taste.

Renaud and del Val jarringly jump around between these three stories in a way that only emphasizes their episodic nature. This thing happens, and then this thing, and then this thing. But none of the plotlines builds much momentum individually, much less together, and then they all just sort of collide at the end when everyone’s back home in the big city. It’s more of the same as the original “Pets,” and yet less. Your kids will be sufficiently entertained, but they also deserve a dog that’s willing to learn a few new tricks. 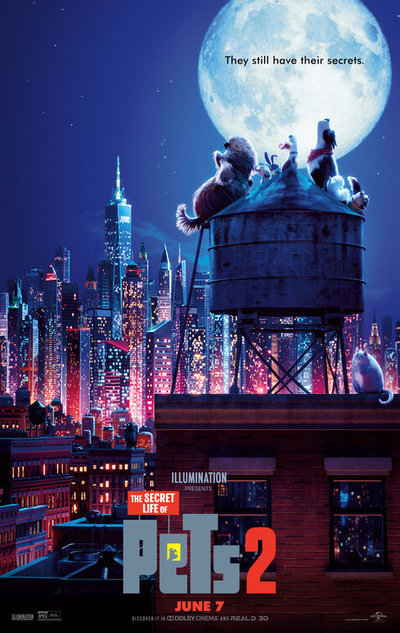