Is “A Dog’s Journey” one of the sweetest canine films out there, or one of the meanest? While I generally favor the latter reading, the gentle sniffling mixed with occasional awws and chuckles that broke out during my screening suggests the majority of the audiences will understandably lean otherwise, as they did with the film’s 2017 predecessor, “A Dog’s Purpose.” In theory, this unconditional affection seems mighty unjust for a shameless family franchise that kills an average of four to five dogs per movie, sometimes, in unspeakably wretched fashions—seriously, where is John Wick when you need him? And yet, as visually uninspired and ideologically conservative as it may be, there seems to be something beguiling about the series that keeps one (including myself, admittedly) on a short leash. Turns out, very few are immune to the sneaky suggestion that certain dogs and humans are meant for each other for life.

This is indeed the philosophy behind TV veteran Gail Mancuso’s “A Dog’s Journey,” which follows in the paw prints of its Lasse Hallström-directed ancestor with its assembly line of doggie fatalities. (Every dog-loving cinephile’s most cherished website “DoesTheDogDie.com” must be having a field trip with these films.) And before you cry out “spoiler alert,” know that spelling out the mounting corpses of our four-legged furry pals in these tearjerkers is not exactly a wrongdoing. Adapted from W. Bruce Cameron’s best-selling novels, the pair of syrupy films follows a Buddhist philosophy, imagining a world in which a dog’s spirit reincarnates in the body of a new adorable puppy (somehow, voiced by Josh Gad even when it’s a female) and pursues its original human to eternity.

“Journey” picks up where “Purpose” had left off, dropping us on a tranquil Midwestern farm ran by the impossibly wholesome couple Ethan (Dennis Quaid) and his wife Hannah (Marg Helgenberger). Their carefree “Boss Dog” Bailey, a handsome Great Pyrenees Bernese Mountain Dog, runs around the picturesque fields and happily chases his own tail, while keeping a watchful eye on Ethan and Hannah’s baby granddaughter CJ (affably played by Abby Ryder and Kathryn Presscott in later ages), parented by the couple’s heavy-drinking widowed daughter-in-law Gloria (Betty Gilpin). Bailey exits the picture soon enough—poor Boss Dog has a cancerous lump—but returns promptly in the body of Molly the mischievous Beagle, reuniting with the 11-year-old CJ to keep a promise he’s made to Ethan. Now living away from her grandparents with the negligent Gloria, CJ finds the kind of comfort and support every child needs in Molly.

Our determined pooch returns again and again as Bailey drops dead in a continuous loop: once, as the African Boerboel Big Dog living on a roadside convenience store (or, “a house made of snacks,” as he calls it), and then as the snippy Terrier Max. Meanwhile, CJ goes through her own transformation and finds herself in the unforgiving streets of New York City as a budding musician with a severe case of stage fright. A series of mean boyfriends—one, a dangerous stalker responsible for Molly’s horrific death—doesn’t help with her insecurity, until she stumbles upon her beloved childhood friend Trent (Henry Lau) and falls in love. (Guess what wet-nosed character masterminds the reunion with a paw shake and tail wag?)

Rest assured, there is sufficient amount of cuteness to go around in “Journey,” complete with dutiful canine humor around pooping, face licking, and the perpetual pursuit of food. But while the film engages with the sadness and despair of certain life crises head-on—an unexpected case of terminal illness is especially well-conceived in that regard—it strangely falls short of treating others with the empathy and seriousness they deserve. Written by Cameron, Maya Forbes, Cathryn Michon and Wallace Wolodarsky, the story is outright hostile to Gloria, a paper-thin character whose mourning and alcoholism receives a cruel one-dimensional treatment. A gold-digging ex-girlfriend of Trent suffers in the hands of a similar caricaturized vision. And yet, no one comes to a film like this, where the world is divided into absolute goods and evils, for nuance or subtlety. If you can look behind the flat visuals and prescriptive pleasantries of “Journey,” you might just get on board with its compelling-enough tale of lost souls, found and lifted up by their forever-loyal pooches. On this earth and beyond. 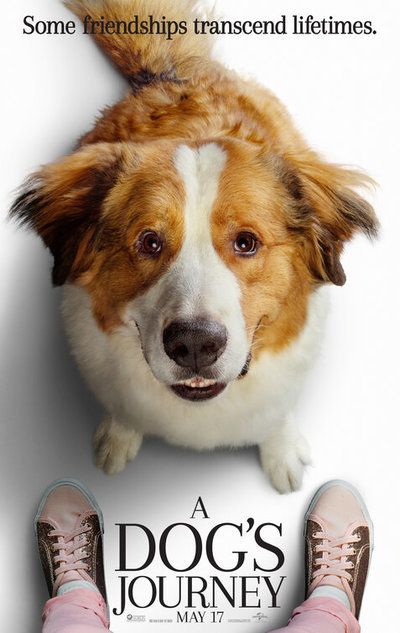 Rated PG for thematic content, some peril and rude humor.