What makes a “dog movie” good? Even as one of those overenthusiastic canine devotees who will often claim she prefers dogs to people (well, I do), I don’t quite have an answer to this question. But I like my movie dogs best when they resemble the way I perceive my four-legged pals in real life: selfless, friendly and fun-loving creatures that live in the moment, would do anything for chicken and think of everything as a game. I cringe when films sell dogs short by adorning them with human-like traits, just to pull the heartstrings of our kind.

So on paper, Charles Martin Smith’s talking dog movie “A Dog’s Way Home”, where a canine takes an utterly implausible two-year/400-mile journey to reunite with the human who saved him from the streets, is my basic nightmare. But after all, I am not made of stone, am I? What dog parent wouldn’t like to believe our lost dogs would eventually find us at all costs, no matter what? And who among us hasn’t interpreted a dog’s thoughts, elaborated on them and even spoken them out loud? I can’t be the only weirdo here and I won’t be the last one to cry during this film’s end credits.

Even then and despite Bryce Dallas Howard’s sweetly soothing voice as Bella (played by the adorable Shelby), I maintain that “A Dog’s Way Home” would have been a lot more affecting and provocative (without losing any of its charming family friendliness) had Bella not been granted a screen voice. Leaving that aside, Smith’s film is still one you can’t help but root for, as the screenwriters Cathryn Michon and W. Bruce Cameron (also the author and scribe of the trilogy that includes “A Dog’s Purpose” and “A Dog’s Journey”) lovingly braid in numerous humanist themes into their tale at every turn.

A stray mutt raised by a cat (which she calls ‘Mother Cat’) in the suburbs of Denver after her mom gets taken away, Bella falls into the hands of Lucas (Jonah Hauer-King) and Olivia (Alexandra Shipp); two kindly med school students who also volunteer for animals in need. Also in the mix is Lucas’ depressed war veteran mother Terri (Ashley Judd), the pet-hating real estate mogul Gunter (Brian Markinson) and antiquated city laws enforced by officer Chuck (John Cassini), that prohibit certain mutts and ignorantly think of “pit bulls” as two dirty words. To save Bella from a most heartbreaking fate (don’t get me started on pit bull euthanasia rates), Lucas, Olivia and Terri find her a temporary home in New Mexico, from which Bella escapes to make her way back to her own humans. It’s a perilous road decked with near-fatal hazards for sure, but also with mostly well-meaning humans and a baby cougar whom Bella calls ‘Big Kitten’—brought to life by what could contend for the year’s worst CGI. But who cares when she proves to be such a loyal and reliable road buddy in the mountains of Colorado?

This may all sound too shameless and syrupy, but to its credit, “A Dog’s Way Home” scratches the surface of something I, as a pit bull obsessive, have never seen a “dog movie” do. Not only does this film attempt to explain the illogical broadness of the term “pit bull” (it’s basically as generic as labeling a canine as “a hound dog”) and the false fear these animals are routinely subjected and fall victim to, it also hints at this irrationality’s faint connection to racism. This is an idea articulated and explained in various essays like Tom Junod’s “The State of The American Dog” and Yasmin Nair’s “Racism and The American Pit Bull”, which also cites Bronwyn Dickey’s book Pit Bull: The Battle over an American Icon. “This is basically racism for dogs” says Olivia, admittedly oversimplifying an utterly complex concept to baffling effect. But the writers and filmmakers deserve some praise for considering what often gets ignored when we talk about how the society gut-wrenchingly mistreats pit bulls.

That being said (and as lovable as Shelby is), I wish the dog cast as Bella looked a bit more like a classic American Pit Bull Terrier to really bring home the filmmakers’ point—the “she doesn’t even look like a pit” line spoken later in the film almost defeats the purpose of good intentions. I also wish the gay couple that Bella crosses paths with (a detail all too rare in hetero-normative mainstream family films) were allowed a bit more natural intimacy that a straight couple would have been free to display. But between its belief in cross-species friendship, unmistakable anti-hunting/environmentalist message and overall progressive tone, “A Dog’s Way Home” is a good dog movie with its heart in the right place, just like any nameless canine regardless of its breed. 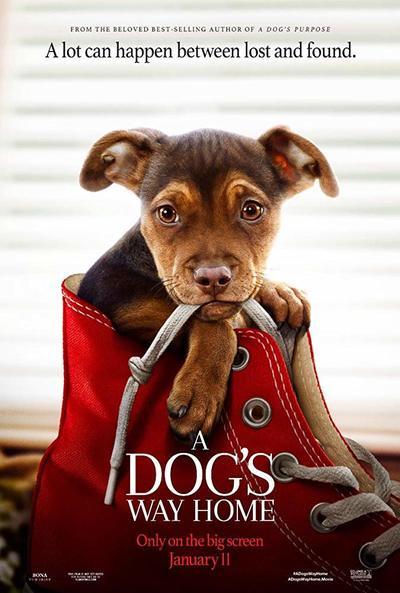 Rated PG for thematic elements, some peril and language.