This grim, glum story of Belgian criminal brothers was submitted by Belgium to the Academy of Motion Picture Arts and Sciences for consideration as a Best Foreign Language Film nominee. It was, in a smart move by the Academy, declined. The movie, directed by Robin Pront from a script by Pront and Jeroen Perceval (who’s also one of the film’s lead actors), is well-crafted up to a point. But the end to which it is crafted is utterly useless.

"The Ardennes" begins with a striking image of a man in a ski mask falling feet first into a swimming pool. After extracting himself, he runs to a waiting car; a tense woman sits in the driver’s seat. Pulling up the ski mask, we see he’s wearing a stocking over his head as well. Uncomfortable. He orders the woman to drive and she does. In a courtroom, moments later, stands a defendant—the man left behind at the scene. He got caught, he didn’t sell out his accomplices, and now he’s sentenced to seven years in prison. Kenny, for that is his name, has a scarred face and a flat-top Mohawk hairstyle, so we suspect he’s already used to a hardened mode of life.

As for Dave and Sylvie, the accomplices, they straighten out. Sylvie gives a moving testimonial at her sober anniversary at a support group. (Memo to contemporary directors depicting circles of chairs in support group meetings: just because it’s a circle of chairs doesn’t mean you’re obliged to break out the old 360-degree dolly. It’s old. And boring.) Dave has stopped drinking and drugging and keeps his head down at a crummy job at a big car wash. One day, his boss, who chain-smokes and watches football nonstop in his office, summons him to the phone. Kenny’s getting out, Dave’s mom informs him. As it happens, Dave is Kenny’s brother, Sylvie is now Dave’s lover but was formerly Kenny’s lover, Dave and Kenny’s mom is generally disgusted with both of the boys, and Sylvie is pregnant with Dave’s child.

Hoo boy. Kenny’s reentry into society is not helped by his thuggish demeanor, his expectation that Sylvie is going to take up with him again, or pretty much anything else. For what appears to be an unconscionable length of time, we sit with these characters as they try to hide the whole truth from Kenny. And this seems reasonably easy, as Kenny not only has a poor attitude overall but is kind of dumb as well. Eventually, the viewer learns he’s not as dumb as all that, although the movie never drops a clue in that direction. And then "The Ardennes" reveals he’s also even dumber than all that. In any event, action, such as it is, picks up when Kenny summons Dave to a parking garage, to show his brother that he, Kenny, has stashed a dead body into the rear compartment of his, Dave’s, car. So begins the final leg of their reunion, from Antwerp to the forested area of Belgium called The Ardennes, the setting of idyllic scenes from more innocent boyhood days. They are not to be revisited this time, as their journey brings them into liaisons with a criminal drag queen and Kenny’s former cell-mate.

The Antwerp depicted in this movie looks like some kind of purgatory on earth; there’s never a sunny day, it’s always wet and murky out, people look malnourished or generally sickly. Kenny distinguishes his status as a Lucifer-like figure by skulking around in a bright red puffy jacket, the most vivid visual in this deliberately grey and dank film. The actors—co-writer Perceval is Dave, Kevin Janssens is Kenny, Veerle Baetens (who was outstanding in another miserable Belgian film, 2012’s “The Broken Circle Breakdown”) is Sylvie, and Viviane de Muynck brings slight echoes of Jackie Weaver in “Animal Kingdom” to her work as Kenny and Dave’s mom—all do credible stuff here. But the character examination is utterly predictable, and when the movie breaks free of its domestic discomfort for a road trip with some ridiculous/absurd diversions (an intra-criminal standoff is broken up by an animal rampage that ought to have been either hilarious or utterly terrifying, and ends up neither), it’s merely building to a grisly and repellent punchline that represents tough-boy cinematic nihilism at its most tedious. 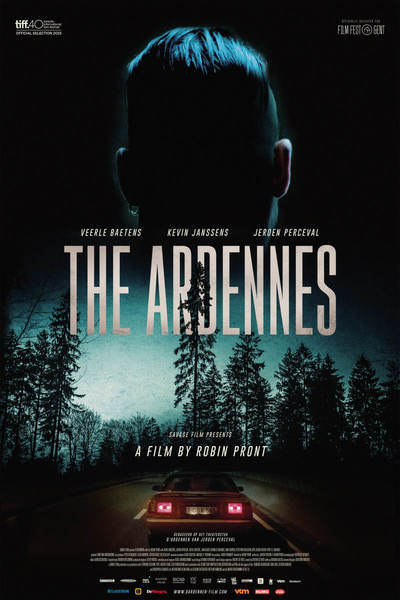