"The 5th Wave," from the get-go, has difficulty establishing tone and mood. Teenager Cassie Sullivan (Chloë Grace Moretz), clutching an automatic weapon, has a standoff in an abandoned mini mart with a wounded soldier begging for his life. Close-ups of Moretz's terrified face predominate throughout. Cassie's voiceover then kicks in, informing us that before all this, she was a "normal" teenage girl. Those words are a betrayal of the character Rick Yancey created in his popular YA series. There's nothing "normal" about Cassie in the book, but onscreen, Moretz hasn't been given a character she can sink her teeth into. Cassie onscreen never comes to life, and without Cassie, the film doesn't come to life either. Even the most primal scenes (mass executions, family reunions, goodbyes), are ho-hum.

Cassie lives with her parents (Ron Livingston and Maggie Siff) and her little brother Sam (Zackary Arthur). Her "normal" life disappears when a mysterious object appears in the sky over earth. Then come the different "waves" of attack from the aliens referred to as "The Others." The first wave is an electromagnetic pulse that kills the power across the globe. Airplanes fall from the sky. The second wave is a series of tsunamis that wipe out coastal areas. The third wave is a plague that kills millions more. The fourth wave involves snipers who stalk and kill the survivors of the other waves. And the fifth wave, unknown, is imminent.

Cassie's mother dies in the plague. The rest of the family trek to a makeshift refugee camp in the woods (where everyone is armed to the teeth). One day, Army tanks show up (the military is immune to the power outage, a fact never explained), and the intimidating Colonel Vosch (Liev Schreiber) carts the children off in school busses to an undisclosed location, promising the panicked adults that they will soon follow. Vosch, at first a savior who takes charge, has more up his sleeve, and Cassie is left to flee through the woods, clutching her little brother's beloved teddy bear.

The narrative splits between Cassie's journey and the journey of her high school crush Ben Parish (Nick Robinson, believable as a boy who has been completely traumatized). Cassie, determined to find her brother, camps in the woods, is shot in the leg by a sniper, and then rescued by a farm-boy named Evan Walker (Alex Roe). Evan is caring but mysterious. He also has blazing baby-blues and rock-hard abs. What would have happened if Cassie had been rescued by a guy who looked like Wilford Brimley? (In the book, the Evan Walker section is extremely strange and suspenseful. Here, it takes on an embarrassing "Blue Lagoon"-ish quality - especially when she peeks longingly at his sculpted torso while he bathes in a river.)

Ben Parish is taken off with the other kids to an Air Force Base, and put through military boot-camp for the upcoming fight against The Others. The trash-talking kid-soldiers play poker in their barracks, go through weapons training, all under the watchful eye of Colonel Vosch's hard-assed medical assistant (Maria Bello). The kid-soldier episodes have an inadvertent absurdity to them, especially when Ben, squad leader, yells at one of his comrades while taking enemy fire: "Stay low!" (The child can't help but "stay low". The child is only three feet tall. His rifle is taller than he is.) A new member of Ben's squad, a deadpan teenage girl nick-named Ringer (Maika Monroe, in a fun performance), challenges his authority, but is an asset in battle. She can shoot a moving target.

The strengths of director J. Blakeson and production designer Jon Billington lie in the apocalyptic wasteland scenes: a highway filled with crashed cars, corpses piled up, orange fires raging through a dark landscape. The colors are sometimes too bright for such a grim story, and the shattering of group trauma isn't present (the way it is in the opening scenes of "The Hunger Games"). Cassie's determination to find her brother is sentimentalized (so many closeups of that teddy bear). In the book Cassie is ravaged by grief and rage. Here, she just seems slightly put-out and sometimes super-scared. Moretz is an excellent actress but she is unable to give Cassie the depth that "The 5th Wave" needs. (Her hair also remains freshly shampooed throughout, even while squatting in the woods for, apparently, weeks on end. Details matter.) "The 5th Wave" is Dystopia-Lite.

When a book is adapted for the screen, there are reasons why some tangential plot points need to go. But Susannah Grant, Akiva Goldsman, and Jeff Pinkner, the screenwriting team who adapted Yancey's book, have destroyed the book's rich texture. Maybe it's unfair to judge a movie adaptation on the source material, but when problems arise in such situations, it's often a problem of adaptation. Even worse, it may make audiences think the book is as silly as the movie.

Post-apocalyptic stories tap into a need to imagine our own destruction, a need pricked with anxiety-filled questions: "What would I do in this situation? How would I fare?" Literature abounds with such stories. Shelley's "Ozymandias" depicts a statue of an ancient king crumbling in the desert sand. T.S. Eliot's "The Hollow Men," with its images of broken columns and fading stars, and its famous final lines, "This is the way the world ends / Not with a bang but a whimper," expresses post-WWI European desolation. Authors Aldous Huxley and George Orwell, Margaret Atwood's "The Handmaid's Tale," Cormac McCarthy's "The Road," Philip K. Dick's "Do Androids Dream of Electric Sheep?", Stephen King's "The Mist," H.G. Wells' "The War of the Worlds," 1950s sci-fi movies, comic books, all laid the groundwork for the Dystopian Literary Craze in which we now live. Lois Lowry's 1993 "The Giver," aimed at a YA audience, ushered in a new era of Dystopian books for teenagers. Suzanne Collins' successful "Hunger Games" franchise has spawned a million imitators. If "Anne of Green Gables" were to be published today, the plucky red-headed orphan would have to crawl through an industrial wasteland to get any attention. Rick Yancey's trilogy (the final installment scheduled for May 2016) is filled with haunting imagery of the earth left more than half-empty, but most chillingly, he understands tyranny and how it operates: if you can make confused frightened people line up and march towards the exits in an orderly fashion, you're halfway towards owning them completely.

These important elements are sketched-in and undeveloped in the film. Instead, we're left with Cassie and Evan throwing longing looks at one another, confusing monologues where people figure out what the "5th wave" is, and reunion scenes that have no punch. The closing narration is milquetoast cliche, something the Cassie in the book, with her raw tenderized heart, would never have tolerated. 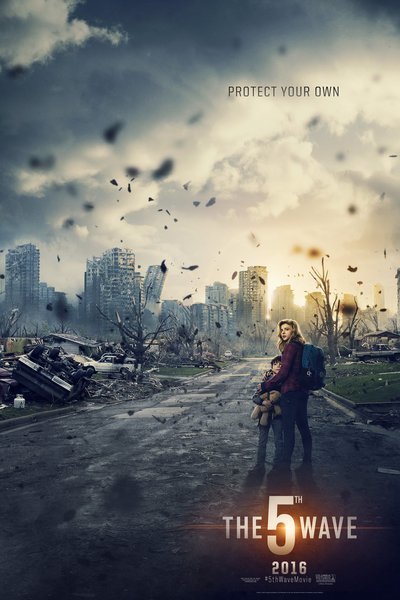