Some years ago, I wrote a piece on “White Dog”, Sam Fuller’s excellent, totally messed-up adaptation of Romain Gary’s novel. At the end of the article, I posted a picture of character actor Dick Miller, who appears briefly in the film holding a monkey. Miller looked happy to be in the scene with Kristy McNichol; the monkey not so much. I captioned my picture with the question: “Who is this actor?” I cannot count the number of responses I received that said “it’s that guy Dick Miller!”

“That Guy Dick Miller” is the perfect title for Elijah Drenner’s wildly entertaining documentary chronicling the 50-plus years of Miller’s career. It is filled with an affection for its subject that not only nourishes lifelong fans of Miller but convinces those unfamiliar to immediately seek out his work. Finding Miller is easy, as he’s appeared in nearly 200 roles. In all of them, Miller was always the memorable Everyman, efficient in the creation of a character who, with very little screen time, always left an impression. He could play the lead, as he did in early films like “War of the Satellites,” but Dick Miller was more often seen as the “very special guest star” of directors who grew up with his work and loved him unashamedly for it.

“That Guy Dick Miller” isn’t afraid to point out that Miller was often the best thing about the movies that utilized him. “They prayed and hoped that Dick would, once again, pull them through a crappy movie,” says Mary Woronov of Joe Dante, Allan Arkush and Jonathan Kaplan, three of the young directors who joined Roger Corman’s New World Pictures back in the early 70’s. Prior to those raunchier flicks, Corman directed Miller in many of Corman’s American International Pictures features. (Miller gives the count as 49.) His most famous role in the AIP era, and possibly the one that endeared him to Kaplan et al., was in 1959’s “A Bucket of Blood.” As the lead, Miller played Walter Paisley, a goofball who longs to impress his beatnik club colleagues. Paisley eventually scores with his sculptures, which are actually people he murdered then covered in clay. How he gets this idea, and the ingredient in his first sculpture, are worth the price of renting “A Bucket of Blood.”

Miller and Corman followed “A Bucket of Blood” with “The Little Shop Of Horrors,” a film Blood’s screenwriter, Charles B. Griffith, had written with Miller in mind for its famous lead, Seymour. Miller opted instead to play a supporting role as a man who came to Mushnik’s flower shop to eat the flowers he bought. (“They tasted like they were from the funeral parlor,” Miller tells us.) Also in that film was a young Jack Nicholson, whom Miller speaks fondly of in “That Guy Dick Miller” and who also shared the screen with him in “The Terror.” That film has one of my favorite Miller moments, where he recounts for Nicholson the entire plot of the movie so that the audience can catch up with its extremely confusing, barely coherent narrative. It takes him a minute and a half, which Drenner mercifully speeds up for us.

Miller is such a character that Drenner takes the advice offered him by many of the filmmakers he interviews: He just turns on the camera and lets Miller work his magic. Miller gets plenty of comic support from his wife of 55 years, Lainie, who was in “The Graduate” and with whom he bickers as if they were on an old radio marital sitcom. He tells numerous stories, including one about the aforementioned monkey from “White Dog,” who bit Miller several times when not using him as a toilet. When someone points out that Miller wore the same hideous pink suit jacket in about 10 New World Pictures, Drenner fills the screen with its appearances, ending with Miller wearing it for this documentary. It still fits him.

Childhood friend, Jonathan Haze (who played Seymour in “Little Shop”) sheds some light on the personal side of Miller, as do Miller’s brothers, Gene and Bill. “That Guy Dick Miller” uses this information about Miller’s upbringing and family delicately and respectfully, fleshing out its beloved hero without dwelling on the details in a bid for dramatic effect. Bill talks about how Dick and his father didn’t always see eye to eye, and how their similar personalities were possibly the reason. Dick talks about his mother, and how her early death preceded his success as an actor in Corman’s films.

Miller also talks about the day he met Quentin Tarantino, and how his role in “Pulp Fiction” wound up on the cutting room floor. I wish “That Guy Dick Miller” had given us more of that cut scene, as it provides the entry point into the documentary: We first see Miller on set with Abe Vigoda (yes, he’s still alive) shooting a short called “Cutaways,” about being cut out of famous movies. If the loss of Miller’s work opposite Harvey Keitel’s Winston Wolf weren’t enough to make fans lament, “That Guy Dick Miller” shows us several of Miller’s unproduced screenplays, including one called “Help! There’s a Spy in my Bed!” Considering what happened to “TNT Jackson,” one of the few Miller scripts that got made, perhaps it’s for the best that we never got the bed-ridden spy movie.

For a talking heads documentary, “That Guy Dick Miller” is extremely enjoyable, well-paced and informative. Scene after scene of Miller’s work appears, including roles in movies by Corman’s stable of directors once they went to the major studios. Clips from Scorsese’s “New York, New York” share space with every film Joe Dante ever directed. Corman himself appears onscreen to express pride that his former prodigies found room for his most prolific actor. Film historians like Leonard Maltin and David Del Valle provide historical context and color commentary on Miller’s career.

It is Del Valle who provides an excellent summation of why Dick Miller remains so beloved and so employed over his career. “Hollywood is not based on talent,” he says. “It's based on being in the right place at the right time and having within you whatever that is that somebody wants.” Though clearly talented, Miller’s onscreen presence epitomizes what all those filmmakers, and all us fans, continue to want. 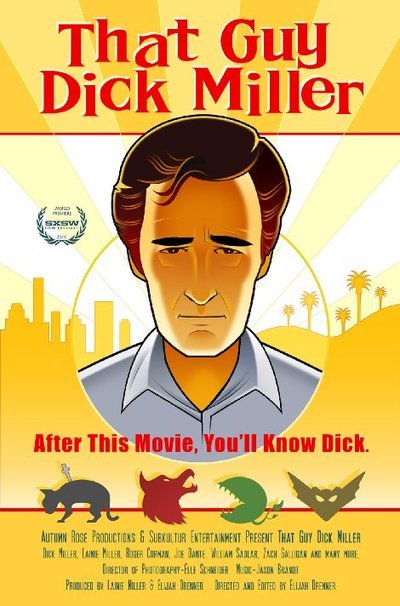 Dick Miller as Himself

Lainie Miller as Herself

Allan Arkush as Himself

Belinda Balaski as Herself

Roger Corman as Himself

Joe Dante as Himself

Fred Dekker as Himself

Corey Feldman as Himself

Robert Forster as Himself

Leonard Maltin as Himself