With man-child overkill at a crisis point in films and TV shows, any mainstream bro-com focusing on three attractive guys who aren't leftovers from "The Hangover" or second-stringers from the Apatow buffoon brigade is a relief. There might still be a place for Zach Galifianakis's unkempt insouciance, but it is nice to see that leading men who hold grown-up jobs and occasionally practice hygiene are making a comeback.

At the very least, the makers of "That Awkward Moment" should get credit for savvy casting, as the opening minutes of this surface-slick slice of post-college life among young male Manhattanites invitingly suggests. With Zac Efron still transitioning from his "High School Musical" teenybopper-dom, it was wise to match him with two talented stars on the rise, Michael B. Jordan of "Fruitvale Station" and Miles Teller of "The Spectacular Now" (of course, some of us have been on the Teller train ever since "Rabbit Hole" and his Willard in the "Footloose" remake).

With Efron as glib alpha male Jason, Jordan as straight man Mikey, and Teller as jokey sidekick Daniel, this bunch initially seems fun hang with. They do boy talk with brash aplomb, drink abundantly with no ill effects, enjoy the kind of hip-chic living quarters that they couldn't possibly afford (known as "Friends" syndrome) and can make a decent running gag out of how white people don't know who Morris Chestnut is. You might question Daniel's presumptuous need to hand out Viagra like breath mints to his pals as they head out on the prowl, but it does lead to one the movie's best sight gags.

But it doesn't take long—somewhere between Jason pronouncing how he hates it when a casual bedroom partner suddenly asks where their relationship is going (hence, the "moment" of the title) and Mikey learning that his cheating wife wants a divorce—before it becomes clear that this will be just another rehash of an all-too-familiar manly meme: Commitment-phobes who seek one-night stands without strings yet somehow end up getting tangled in amour.

Declaring solidarity with Mikey's sudden turn of events, the three take a vow of singlehood–which shouldn't be difficult, since that is already the path they supposedly have chosen. But then Jason falls for Ellie (British up-and-comer Imogen Poots, all blue saucer eyes, funky blond hair and almost-OK American accent). Daniel suddenly decides to get serious with friend-turned-lover Chelsea (Mackenzie Davis, who proves captivating despite being stuck in one of several underwritten female roles). As for Mikey, all he foolishly wants to do is to woo his wife back.

If comedy is in the details, that is where "That Awkward Moment" falls short, with its plethora of plot holes and lapses in logic. Jason and Daniel are supposed to be genius book-jacket designers, but their art wouldn't be worthy of posting on a fridge alongside a kid's crayon scribbles. Meanwhile, Mikey is a doctor at a hospital, yet his schedule hardly oppressive. Ellie invites Jason to a "dress-up" surprise party for her birthday, and instead of donning his good suit, he shows up in an outfit that would make an S&M devotee blush. OK, Jason was confused about what "dress-up" meant. But why would he wear such an embarrassing outfit anyway, knowing that Ellie's friends and family would be there?

Matters grow more problematic as Efron's storyline begins to overwhelm that of his cohorts. The more we learn about Jason, it becomes clear that he is a world-class jerk, the kind who declares, "We are the selfish generation," as if that were a good thing. Is it really that romantic for him and Ellie to pose as a well-off couple interested in an expensive Gramercy Park abode and then steal the key to a private area when the real estate agent isn't looking?

For a raunchy comedy, there is surprisingly little sex, much of it perfunctory. Once an untimely death occurs and Thanksgiving arrives (apparently our saddest national holiday), all seems lost, and Efron—his hair pouffed perfectly, his facial scruff just so—must summon whatever outward sign of gloom and suffering that he can for the camera. And that is one awkward moment. 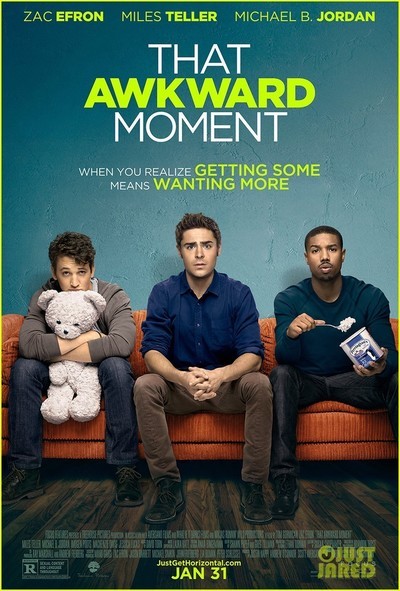 Michael B. Jordan as Mikey