Teenage Mutant Ninja Turtles: Out of the Shadows

It probably doesn't matter that toy-commercial-cum-movie-shaped-object "Teenage Mutant Ninja Turtles: Out of the Shadows" is better than its predecessor, "Teenage Mutant Ninja Turtles." It also doesn't matter that "Out of the Shadows" was not designed to make any sense beyond extending the commercial longevity of four cartoon characters who now look like unlovable, steroid-enhanced behemoths. Nevertheless, it should be noted that "Out of the Shadows" is not particularly good at its bottom line: sowing the seeds of merchandise-enforced nostalgia that will inevitably lead viewers to adulthood with the wrong impression of what a kid-friendly action-adventure blockbuster should be. This is the kind of movie that leaves you with the impression that more thought was put into catchphrases and fan service than into a compelling plot, thoughtful characterizations or imaginative action choreography.

I will also tell you that the plot is nothing more than a heap of drama-less developments that rely on sheer coincidence, hideous convolutions, and ridiculous expository dialogue to move forward. So: everybody's favorite computer-generated amphibian crime-fighters try and fail to recapture arch-nemesis Shredder (Brian Tee) after he breaks out of police custody. Shredder received help from Commander Krang (Brad Garrett), an alien brain monster who lives in a robot's tummy, operates out of a Death-Star-like doomsday machine called the Technodrome and is eager to enslave humanity.

The turtles face great peril from Stomach Tumor, Shredder and the gang, including (but not limited to): a lady ninja, two mutant animal-man hybrids named Bebop (Gary Anthony Williams) and Rocksteady (Stephen Farrelly) and evil super-nerd Baxter Stockman (a bowtie-wearing Tyler Perry). But they also face dissent within their group when they rehash the main dilemma of virtually every Ninja Turtles movie, and threaten to disband after un-emotional leader Leonardo (Peter Polszek) pulls rank on hothead Raphael (Alan Ritchson), and Raphael pitches a group-rending fit.

Did I mention that a good chunk of the plot revolves around sex-appeal-having TV reporter April O'Neil's (Megan Fox) and her pout-riddled quest to convince incurious police Chief Vincent (Laura Linney) that the turtles are good guys? Or the way that Donatello (Jeremy Howard), the know-it-all turtle, won't stop dispensing some of the most lazy, most illogical expository dialogue since, well, the last Michael Bay-produced movie? How about the way that big bad Shredder doesn't do anything, or fight anybody since henchmen Bebop and Rocksteady spend much of the film ... also not confronting the turtles?

"Out of the Shadows" lacks even a modicum of escapist joy that the live-action Ninja Turtles films of the '90s had. The film is bogged down with more action-figure-friendly supporting characters—oh yeah, "Arrow" star Stephen Amell plays hockey-mask-wielding hero Casey Jones—than even the most over-stuffed superhero movie. The plot is essentially lifted from several other Ninja Turtles-related stories. The film is pre-visualized-to-death with its ugly-looking CG protagonists, who still look like the California Raisins' olive-skinned, Mini-Cooper-sized cousins. The jokes feel like place-holders for actual jokes, especially Michelangelo's mediocre, sub-knock-knock jokes mugging. The action scenes, while more technically accomplished than the last Ninja Turtles' film's set pieces, lack any fun grace notes. And there's just so much dialogue that boils down to characters leaping to impossible conclusions that don't follow an internal logic.

But none of these complaints matter as much as the realization that some day soon, a kid is going to rewatch "Teenage Mutant Ninja Turles: Out of the Shadows," and want to buy something (toys, t-shirts, video games, Blu-rays, whatever). This kid may enjoy the film for a while since the hold of nostalgia is powerful. But this movie will let him or her down because it was not made to last. Pandering ferociously to young viewers with jokes about "tentacle mucus," Lionel Richie song cues and other mercilessly unfunny no-brow gags can only win you so much favor. There is something insidious about the dumb mirthlessness of "Out of the Shadows," and it's not the kind of thing that kids are completely blind to. So go ahead, take your children. Any disappointment that leads them to better age-appropriate entertainment is a worthwhile, healthy rite of passage. Their inevitable disillusionment may even hasten a growth spurt. 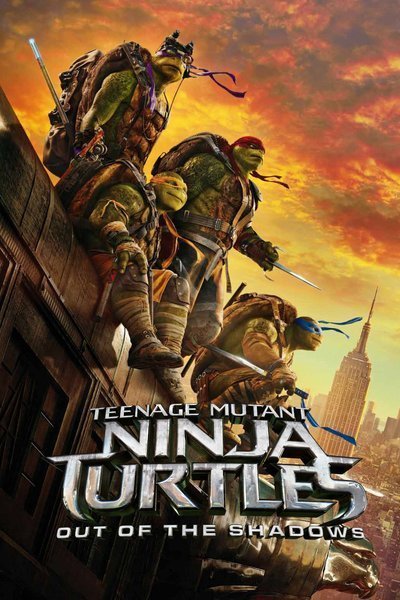 Teenage Mutant Ninja Turtles: Out of the Shadows (2016)

Will Arnett as Vernon Fenwick