Lee has been criticized for bringing too large a shopping basket to the party. She has the same enthusiasm for scientists trying to develop intelligent robots, and a guy who travels the world on a recumbent bicycle with a solar-powered Macintosh mounted between the handlebars, and explains, “I live on the Internet.” Surely, her critics have said, she could have zeroed in on one thing or another: On cybersex, or game theory, or artificial intelligence, or cryogenics, or Prozac, or a performance artist whose art is plastic surgery on her own body, or . . .

I think she's on the right track to be a uncritical, to look at the countless bizarre ways that people are attempting to dictate the terms under which they live in this world. Evolutionary change takes place at the margins, not in the center. Something that works perfectly need not evolve. Only failures need to become better.

The checkout clerk with pierced eyelids may not seem to have much in common with Marvin Minsky, the guru of artificial intelligence, but both are saying that man need no longer play only the cards he has been dealt. The most significant discovery during the life-span of human intelligence is the cracking of the genetic code, and with it the possibility that we need no longer be only the passive result of eons of evolution. Today we cross a tomato with cod genes and get a vegetable that doesn't freeze. Tomorrow we learn to live forever.

(Or, maybe, the tomato turns us into fish. We take our chances.) Lee's documentary is not a well-organized film, and it is sometimes maddening (she accepts everything that is told to her, and rarely questions anyone even when statements cry out for followups). But what it lacks in precision and organization, it makes up for in a reckless, globe-trotting enthusiasm. A Korean raised in South America and now living in America, she traveled widely for three years to interview people who were trying to shape inner and outer environments.

In Japan, she finds vast indoor pleasure domes: Ski slopes built with artificial snow, beaches washed by artificial waves, golf driving ranges where the players are stacked one above the other up to the sky. On the Internet, visits Web pages where strippers perform on demand. It is a cliche to visit Las Vegas and find artificial volcanoes and pyramids. But what about the notion that someday society will be organized along similar lines, and like gamblers we will never go outside, or know night from day, or desire anything that cannot be ordered over the phone? The underrated movie “Strange Days” suggests a future in which we can “jack in.” Electrodes attached to our brains will give us the illusion of complete virtual reality; all of our senses will be involved, so that we will not be able to tell the difference between something we are really experiencing and something we “only think” we are experiencing. (After all, even now, we “only think” we are having experiences.) What if we could plug in to computer-generated artificial sex and have a virtual orgasm? Would that constitute adultery? Would it be a sin? Would it be sex? Lee visits a French performance artist who is having herself turned into a replica of the Mona Lisa. Is this any stranger than the countless women who are using plastic surgery to turn into younger replicas of themselves? She is fascinated by tattoos, not for their art, but because they reveal an impatience with the bodies we were issued. Transsexuals fascinate her for the same reason: Why must we be the same sex for an entire lifetime? For that matter, why must we die? Can we be frozen and resurrected later? One stop she didn't make was in Sri Lanka, where Arthur C. Clarke has recently become fascinated with the idea of a Soul Machine--a computer with a memory so vast and fast that “we” could be downloaded into “it,” and exist forever on a computer chip. And if the chip were fed virtual images to inform “us” that we were living in a “real” world, would we know we were not? (This is the same idea Clarke touched on years ago in his science fiction.) “Synthetic Pleasures” raises these questions and many more. It does not deal deeply with any of them; it is not investigative, but evocative. Seeing it, you may be frustrated because Lee is essentially just a cheerleader. But it will make you think. Or at least you will think you are thinking. If, of course, that is really you. 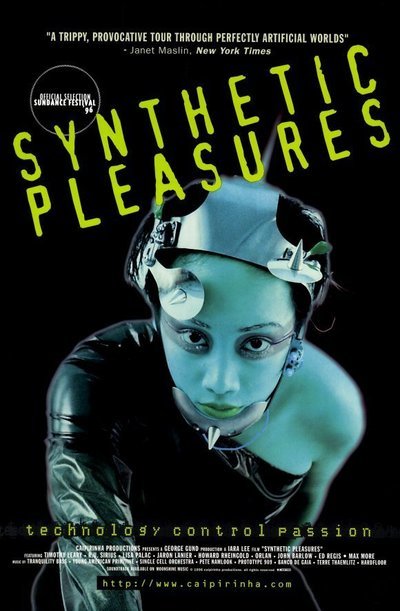