The concept being referred to in the title of “Sworn Virgin,” a debut feature by Italian writer-director Laura Bispuri, belongs to the traditional culture of Albania, where some of the film takes place. In a rugged, impoverished world where women are treated as chattel, some escape their hard, gender-determined fate by claiming the status of “sworn virgins” before a dozen male elders, after which they don male garb and live as men.

They are then allowed to carry rifles, hunt and engage in all privileged male activities, except one. They are not allowed to have sex with either gender. This custom supposedly dates back at least a couple of centuries and, though now dying is out, is still practiced by some women in Albania’s remote mountain villages.

The information given above would be a help to any viewer going into “Sworn Virgin.” As it is, the film obliges viewers to puzzle out the nature of the sworn virgin tradition, and even at the tale’s end, it may not be clear. This can only be counted a virtue by those who count obscurity and bafflement as artistic assets.

The film’s story has three strands, one present-tense and set in Italy, two set in Albania in years past. All three concern two Albanian sisters who have chosen different routes for escaping the gender-imposed hardships of their native culture. Lila (Flonja Kodheli) left Albania for Italy and a middle-class married life. When we meet her there, she has a teenage daughter named Jonida (Emily Ferratello).

Years before, her sister Hana (Alba Rohrwacher) chose to live as a sworn virgin named Mark. When the present-tense story opens, Mark comes to Italy to visit Lila, still dressed as a man but evidently determined to start a new life away from her native culture. As we follow her tentative efforts to do this, the film repeatedly flashes back to the sisters’ lives in Albania as kids and around the age of 20, before Lila departs.

The first thing to note about the film’s central conceit is that it makes “Sworn Virgin” part of a long line of movies in which an actor playing a character who’s supposed to pass as a different gender is completely unconvincing. Oddly enough, if that’s a failure of sorts, it’s one that doesn’t detract from the film’s entertainment value and actually jibes with its thematic thrust. Whether or not we believe the actor as someone who successfully passes as a male, we get to compare our impressions to those of the people the character meets, and reflect on the extent to which gender is performance, successful or not.

Though its focus on blurred genders makes it part of a fashionable trend in movies, the film doesn’t deliver much in the way of dramatic power or unexpected revelation, and its recurrent time-shifting, while intellectually apposite, further diminishes its narrative momentum. The most winning aspects of Bispuri’s approach involve details and subtle dramatic developments, such as the evolving relationship between Mark/Hana and her niece, an Italian kid who’s never known Albania. Though the niece is at first suspicious and resentful of this odd interloper, a sort of complicity emerges between them.

The tale’s most resonant setting is a public pool where female competitive swimmers must maintain a very specific high-gloss look, and where Mark is the one visitor who can never doff his clothes. It’s in a bathroom there that he meets a guy who comes on to him apparently assuming he’s a boy—a strange introduction to sex for a woman who would rather not be a male.

That reality underscores the fact that “Sworn Virgin” is not the tale of a transgender person. In fact, read from a political angle, its implicit endorsement of gender birth roles can seem either unexamined or retrograde, though that may be putting too much weight on its rather simple premise.

Another odd thing is that the sections in Albania (shot in the aptly named Mountains of the Damned) don’t delve into the role of religion. Are these folks Christian, Muslim or other, and do the local clerics approve of or ignore the sworn-virgin tradition? In most conservative rural societies like this, religion plays a large and central role. But “Sworn Virgin” is not the first film to give the impression that, in current European art cinema, religion is the one subject that dare not speak its name. 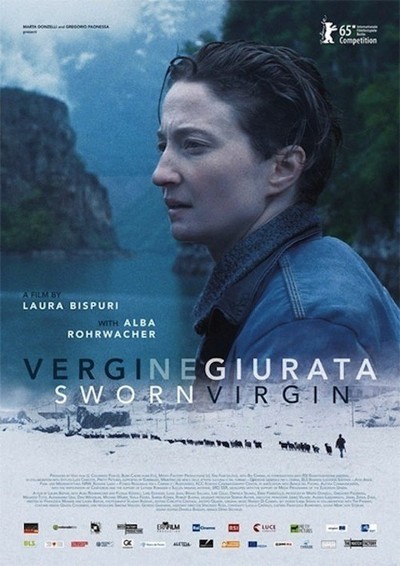