You can immediately see why Jason Momoa not only signed up to play the lead in the action-revenge thriller "Sweet Girl" but also executive-produced it.

It's a sprawling, bruising, sometimes convoluted, often emotionally exhausting drama with action sequences stitched into it. It's about a man trying to get revenge for his wife's death from cancer at the hands of a depraved and indifferent pharmaceutical company while his daughter (Isabela Merced) is pulled along by the currents of his rage. Momoa's character, ex-military guy Ray Cooper, feels like one of those soft-spoken, "All-American" character parts, the kind that's currently being played by an array of fortysomething Anglo guys in baseball caps. As such, it asserts Momoa, who is half-Native Hawaiian and part Native American, as a representative everyman, just as relatable as somebody like Mark Wahlberg or Matt Damon. And it gives Momoa, who gained fame as Khal Drogo on "Game of Thrones" and Aquaman, a chance to show us sides he hasn't presented yet—in particular the distress of an ordinary (though large and tough) man who has no superpowers or cavalry, and must go it alone against enemies that get away with murder because the system is set up to rubber-stamp their profit-making.

The main problem here is that—as written by Philip Eisner and Gregg Hurwitz, and directed by first-time feature filmmaker Brian Edward Mendoza—"Sweet Girl" is too long and disorganized, and often just too much, for its own good. It seems to want to be five, possibly six landmark 1990s and early aughts blockbusters at once. You'll recognize which ones every time a pilfered action beat or plot twist arrives, but let's just say that "The Fugitive," the "Terminator" movies, and the Jason Bourne films loom large, as well as any popular blockbuster where the storytelling cheats to create a whopping surprise that nobody could see coming because truth be told, it's kinda dumb. "Sweet Girl" clocks in at nearly two hours, but there's a tighter, less derivative, more powerful movie in there—possibly a working-class-hero legal drama like "Dark Waters" or "Erin Brockovich," except the lead character is a bruiser who can put another man's head through a wall.

The story begins, alas, with a flash-forward to Ray on a bridge being entreated to give himself up, then cuts to several years earlier, when Ray, his wife Amanda (Adria Arjona) and his daughter Rachel (played in a younger incarnation by Milena Rivero) are devastated by Amanda's cancer diagnosis. The film speeds through Amanda's deterioration, skipping ahead to the phase where she's hairless and disabled, essentially watching the clock in a treatment center. There's a generic drug that just got FDA approval that's far more affordable than the name-brand version, and Amanda is eligible for it, but the possibility is cruelly snatched away when the head of the pharmaceutical company abruptly withdraws it from market. There are intimations that a payoff was involved. In a sure-to-be-crowd-pleasing moment, Ray calls into a TV talk show that's interviewing the CEO, Justin Bartha's Simon Keeley, and tells him he's coming for him. Then he makes good on his promise.

What's initially fascinating about "Sweet Girl" is that even though it gives us a hero with commando-level combat training, it makes him a real person who stumbles and fails and has to recover from injuries, and turns him loose in a real world where guys like Keeley have tons of security, and the laws of both economics and physics prevent enemies from easily getting close enough to inflict a killing blow. On top of that, this film is not set in a comic-book universe where actions have no consequences. The first time Ray tries and fails at doing something, he's marked by the authorities as a deadly threat to the greater good, and he and his daughter spend the vast majority of the film on the run from the authorities, calling significant allies on shadily-acquired burner phones delivered to remote stretches of woodlands where the duo is living out of Ray's vintage muscle car.

There are times when the movie can't resist making Ray a borderline-superhero who makes incredible saves and improvises his way out of tight spots that would vex James Bond himself. But for the most part, the movie tries to keep things at least remotely believable. And Momoa is such a grounded, earthy actor—a broad-shouldered, sad-eyed, working class hero-type, more reminiscent of Burt Lancaster, Anthony Quinn, and other actor-bruisers from earlier eras than a standard-issue 'roided-up action figure. He's far more compelling when Ray is weeping in a hospital hallway, or snarling at his daughter for refusing to get out of the car when he's about to go on a killing mission, than when he's doing the whirling dervish thing that we've come to expect from characters like this.

The action, in fact, is the least satisfying aspect of the production. The fight choreography and chase scenes are imaginatively choreographed, and sometimes invigoratingly awkward, with Ray and various combatants (including an Anton Chigurh-like loner assassin played by Manuel Garcia-Rulfo) crashing through windows and walls and tumbling down stairwells and rising up at the end looking well-and-truly stomped. But they tend to be shot and cut in a "Taken" mode, with the camera swinging wildly and the edits falling in odd spots that suggest that the main goal was to camouflage the fact that they didn't have as much time or money as they wanted.

A bigger problem is that the film becomes less anchored in simple human emotion as it goes along, padding out its running time with what turn out to be narratively unnecessary side quests and time shifts, and unveiling a series of twists that might be less exhilarating than annoying for viewers who had become sincerely invested in the humanity of the lead characters. Considering the skill and feeling that the main actors—particularly Momoa, Garcia-Rulfo, and Merced—bring to every scene, it's depressing to see them pour their efforts into convincing audiences to believe ridiculous things rather than cleave more tightly to recognizable feelings and situations. Merced in particular does heroic work fortifying nonsense.

This is a perfect time in U.S. history to release a widely accessible, handsomely produced action thriller where the villains are the executives of price-gouging pharmaceutical companies, the corrupt public officials who enable their evil, and the non-functioning corporate democracy that treats health care as a privilege instead of a basic human right. "Sweet Girl," unfortunately, never manages to become that film because, after a certain point, it becomes more interested in outsmarting us than moving us. 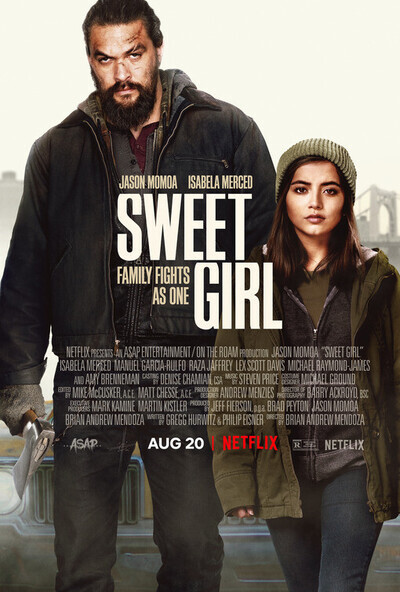 Rated R for some strong violence, and language.