"Dark Waters," starring Mark Ruffalo as an attorney trying to punish the DuPont chemical corporation for dumping toxic waste in West Virginia, is a lone-crusader-against-the-corrupt-system film, in the tradition of "The Insider," "A Civil Action," and "The Verdict." Director Todd Haynes ("Carol," "Mildred Pierce") embraces that lineage, giving viewers the sense of what a long, tedious, spiritually draining process this can be, and letting even the best-looking, most charismatic actors in the ensemble appear onscreen looking as if they inhabit the same reality as the rest of us and are exhausted by it.

Ruffalo stars as Robert Billott, a Cincinnati, Ohio attorney for Taft Stettinius & Hollister, a firm that represents major corporations, including DuPont, one of the world's most powerful chemical manufacturers. Through personal ties, and against the wishes of his own colleagues, Billott decides to help a lowly cattle farmer from Parkersburg, West Virginia named Wilbur Tennant (played by Bill Camp, with beetle brows that make him look like Beau Bridges from a distance). Wilbur's cows have been getting sick, going insane, and dying off at an alarming rate, and he's convinced it's because DuPont poisoned the nearby water supply. He's right, of course, but proving it won't be easy, nor will establishing a chain of intentionality that might make DuPont liable for cleanup and restitution.

What follows is a detective story with a nice guy lawyer at its center. Robert Billott is convincingly portrayed by Ruffalo as a sort of human version of Droopy the Dog, a cartoon character who defeated flashier, more volatile adversaries by being unflappable, indomitable and polite, and showing up where his foes least expected it. Haynes uses wide shots to emphasize Ruffalo's modest height compared to looming costars like Tim Robbins (as Billott's boss Tom Terp). The actor's turtle-in-a-shell body language further emphasizes that this smart, ethical man is financially, politically, even scientifically outgunned when trying to prove that DuPont has been dumping toxic waste into West Virginia soil, causing cancer, distemper, and rotting teeth in humans and animals alike.

Moviegoers who keep up with environmental news (or who have read about the actual case that inspired "Dark Waters") know that the farmer's plight is a gateway to a wider discussion of perfluorooctanoic acid (PFOA), a byproduct of one of DuPont's most lucrative postwar products, teflon. This in turn leads to a wider and more alarming look at toxic chemicals that are spread through the water supply, enter human bodies, and stay there.

And it's that last bit of information that gives the movie a grim charge. At its most controlled and insinuating, "Dark Waters" is reminiscent of paranoid thrillers from the 1970s like "The Parallax View" and "Chinatown." In those kinds of movies, you know going in that you're going to see a story about how bad things are, thanks to corporate influence over government as well as the economy, but the extent of the corruption is still shocking, highlighting the implicit question: why fight, if the bad guys have already won? The answer, of course, is that you should fight because it's the right thing to do, and because even the promise of justice is slim, it's a public service of a more diminished kind to show people how broken the system is.

Written by Mario Correa and Matthew Michael Carnahan ("Lions for Lambs") from a New York Times Magazine story, and shepherded by co-producer Ruffalo, an environmental activist, "Dark Waters" never entirely overcomes a formulaic quality that tends to dog even the best examples of this kind of picture. This is noticeable not just in the storytelling rhythms, which twist and turn pretty much when you expect them to (a satisfying triumph followed by a deflating reversal of fortune), but also in the way it portrays Billott's relationship with his supportive but understandably worn-out wife Sarah, played by Anne Hathaway. Sarah gives birth to two children during the course of a tale that takes more than a dozen years to play out, worrying about DuPont-caused birth defects the whole time; but she has to be content with a mainly advisory or sounding-board role, and the movie is never less convincing than when Sarah is announcing that she's not just The Wife in a heroic man's story. (To be fair, it's hard to say how this could've been remedied; Billott is our guide through the story as well as the audience's mirror. But maybe there was a way to make Sarah not sound as if she's arguing with reviews that haven't been written yet?)

But "Dark Waters" is still a strong and involving, though understated, example of this dying breed of film, resonating with present-day feelings of hopelessness at the brazen corruption on display every day in the United States, and throughout the world. Haynes might not initially seem like the kind of director you'd expect to see attached to this sort of project. But he has a keen eye for the narratively meaningful camera move (notice how often the movie starts a scene in darkness or by zeroing in on an out-of-focus element, then gradually makes the image clear) and undeniable skill with actors (Victor Garber as the CEO of DuPont is a perfect distillation of the nice-guy arrogance of the super-rich). The script is good at showing the hero doing the necessary work to get to a breakthrough, whether by sitting by himself on the floor of a storage room and going through hundreds of boxes of evidence documents, or carefully re-reading a letter from DuPont until he realizes it doesn't say what everyone else thinks it says. (How often do movies make reading comprehension cinematic? Almost never.)

The film also makes sense as part of the HCU (Haynes Cinematic Universe). Fans of the director's work will sense affinities between this movie and "Safe," about a woman suffering from environmental illness. It also echoes Haynes' self-aware period pieces "Mildred Pierce" and "Far From Heaven," which were partly about how social norms (be they sexist, racist, homophobic or, in this film's case, class-based) enable the status quo to preserve itself.

For all its patience and droll humor, this is an angry movie, rightly so. The most crowd-pleasing moments find Ruffalo transformed into a Jimmy Stewart- or Tom Hanks-level idealistic Everyman, railing against the world's evils while also taking the time to explain how they became entrenched, and how it's still possible to fight them, in a small way, at great cost. 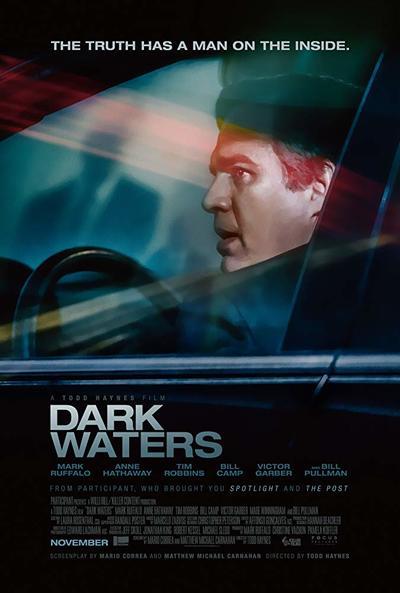