Carl Hiaasen's “Striptease” was a novel that thought all of its characters were hilarious. Now here is the Demi Moore movie version, in which all of the characters are hilarious except for Demi Moore's. Her character, named Erin Grant, is a woman who has lost her daughter in a crooked custody battle, and goes to work in a strip club to earn enough to win her child back.

The woman is brave, heroic and stacked, but she's not funny. The movie's fatal flaw is to treat her like a plucky Sally Field heroine. That throws a wet blanket over the rest of the party. The point of the Hiaasen story was that everyone was funny: He cast a dubious eye on the strippers, the bar management, the customers, the sex-mad congressman, the sneaky sugar baron, Erin's ex-husband--on everyone. They were all part of the same comic world. When you extract one of those characters from the mix and treat her seriously, it throws off the timing and it undermines the rationale of the whole undertaking. My guess is that when Demi Moore and the writers started musing about how Erin Grant would “really feel” in a situation, or how the audience would be able to “identify” with her mother's urge to win her child back, someone should have stepped in to gently say: It's a comedy, honey, and when it's not a comedy, it's a satire. Everything in this movie should be for laughs, including the ex-husband, the kids and the brave Erin Grant. As “Striptease” opens, custody of Erin's child is being given over to her worthless husband (Robert Patrick), who may be a convicted criminal but was, as the Florida judge recalls fondly, “a great tailback.” Erin needs work and starts stripping at the Eager Beaver, a “gentleman's club”--so called because most of its customers are never called one anywhere else. We meet the fellow strippers, including the buxom Urbana Sprawl (Pandora Peaks), who is named after my hometown and so of course deserves a mention here. The bouncer is Shad, played by Ving Rhames, who was Marcellus Wallace in “Pulp Fiction” and this time provides a strong shoulder for a vulnerable girl to cry on. The club customers include the Erin-worshipping Jerry Killian (William Hill), who thinks he may know how to help Erin win her child back, and the perpetually drunk and randy U.S. Rep. David Dilbeck (Burt Reynolds), who is capable of leaping onto the stage in mid-grind to protect one of the dancers from an annoying customer. Among the other threats to the dancers are boa constrictors that wrap themselves around their necks, and a management that is always thinking up bright new ideas. One stripper protests against the latest proposal, which is creamed corn wrestling: “No chance I'm gonna roll around in creamed corn with a bunch of yahoos trying to push Niblets up my hoo-hah.” There is in that dialogue a suggestion of the direction “Striptease” might have taken. Certainly the director, Andrew Bergman, is capable of making a satirical laugh fest; his credits include “Honeymoon in Vegas” and “The Freshman.” But the problem is with Erin Grant, who interrupts the comic rhythm with her underlying seriousness. When she's not on the screen, the characters are free to float into satire, and Burt Reynolds has some splendid scenes as the tool of the local sugar cartel. But when Erin returns, the other actors have to match her more somber energy level, and there goes the comedy. The sex business is certainly ripe for satirical treatment. But not here. That leaves the movie's much-advertised nudity and eroticism, which for me were disappointing. The stripteases are choreographed to present the strippers as seasoned pros, indifferent to their nudity and disdainful of their customers.

To be erotic, a striptease must seem to mean something to the person disrobing: There must be the illusion that nudity is a meaningful decision that the stripper is taking reluctantly. Most striptease gimmicks and props are therefore counter-productive. A stripper who needs to perform with a snake, or demonstrate dexterity in making tassels twirl in opposite directions, is essentially saying that she realizes her unclothed body is of no interest unless she also does parlor tricks. The strippers in “Striptease” take pains to show that stripping in public is without psychic risk to them. This is true even of the Erin Grant character, who claims at one point she gets nauseous before she goes on stage, but is a pro the moment the spotlight hits her. The attitude she projects in the TV ads is the same one that carries through the movie: I'm doing this so brazenly that you'll never know how I really feel about it. The greatest stripper of all time was probably Tempest Storm, who is, I gather, still active in her 60s. Perhaps no one alive has taken it off more often. Yet on the two or three occasions when I saw her (including once in a sleazy Times Square theater), she was able to create the illusion that she was reluctant--all but a blushing novice--and there was a certain sweet delight in the way she finally disrobed. The strippers in “Striptease” would possibly find her act too revealing; their impersonality is a shield protecting them from the suckers. Hiaasen is a very funny writer, whose work needs to be respected if it is to work on the screen. Like Elmore Leonard, who Hollywood finally got right in “Get Shorty,” he is not a writer whose books you film for the plot. You film him for the dialogue and the attitude. Forget that, and why bother? 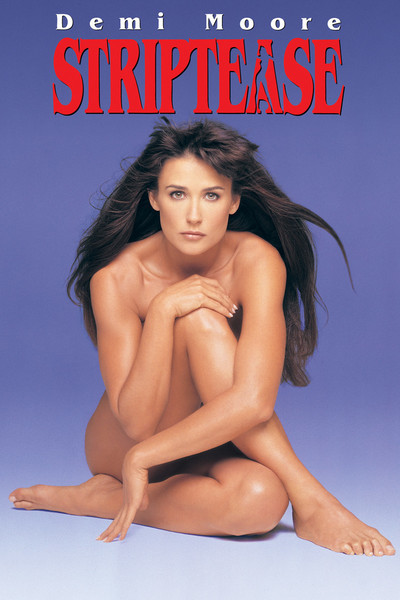