When it comes to horror movies like “Still/Born,” inspiration is key. It’s a fairly rudimentary tale of a demon terrorizing someone in their home, but it has a sincere emotional hook—the demon is the virtual embodiment of a new mother’s postpartum depression, along with the grief when only one of her twins survives childbirth. Recent titles like “Annabelle” and “The Babadook” spring to mind when it comes to these ideas being mixed into a ghostly story, and “Still/Born” doesn’t get as many points as one would hope for originality. But this is an inspired-enough take on a woman's horror, where the fear of losing her other baby becomes a terror itself, as expressed through an excellent performance.

Christie Burke plays Mary, who settles into her life of young motherhood with her husband Jack (Jesse Moss) and their surviving twin baby, Adam. “Still/Born” is a slow descent for her, in which she goes from plainly sad to sleepless and eventually a slave to hallucinations, especially when she sees through the baby monitor something lurking over Adam’s crib at night. All the same, Jack becomes less and less helpful, leaving her to take care of the baby and become even more isolated in her fading sense of what is real. It doesn’t help her, or the script’s integrity for that matter, that he’s the type of bozo to quietly appear behind his panicked wife (twice), or that he lacks sensitivity to his wife’s conditions, making him a type of passive villain.

As it builds on a very real medical condition but talks about it often through jump-scare horror, "Still/Born" clumsily tiptoes the line between being disturbing and exploitative. Halfway through the movie, Mary finds some counsel in a mother who also had a demonic postpartum experience, which here becomes just another genre cliché (in this case, mythology about demonic episodes of past). At the very least, "Still/Born" makes no bones about its metaphor, with Michael Ironside appearing in two scenes as a therapist to diagnose Mary's conditions originally as postpartum depression and later as postpartum psychosis.

What proves essential to “Still/Born” is the noteworthy and grounded work by Burke. She painfully articulates the ways we can’t step back from a trauma that consumes us, while showing the definitive levels of irrationality a terrified person may experience. When no one believes her as things start to get spooky Mary is vulnerable, tragic; when she realizes that she might be able to sacrifice her neighbor’s baby to save her own, she’s desperate, terrifying. Burke is an always-reliable presence, even when Christensen is merely setting her up for something to jump out at her.

As the movie tells Mary's story, it's disappointing that its theme is the most audacious concept, functioning more like a genre exercise for a debut director who wants to make a home in horror. Even the usage of babies can seem like a convenient way to create tension, the constant shrieking of one-month-old Adam (played by Christensen’s real-life, brand-new niece) and the viewer’s worry of seeing something awful happen to a baby compounding for automatically uneasy moments.

But Christensen does show promise with the common art of executing rich jump scares, creating dread out of something in the shadows, and giving this psychological story a sense of atmosphere. Perhaps best of all, his script with co-writer Colin Minihan ("Grave Encounters") is able to keep the freaky elements mysterious, instead of turning his third act into a type of face-to-face showdown. “Still/Born” is the noteworthy, if not rare supernatural horror movie that doesn’t lose steam by its third act when we know exactly what kind of demon we're dealing with. 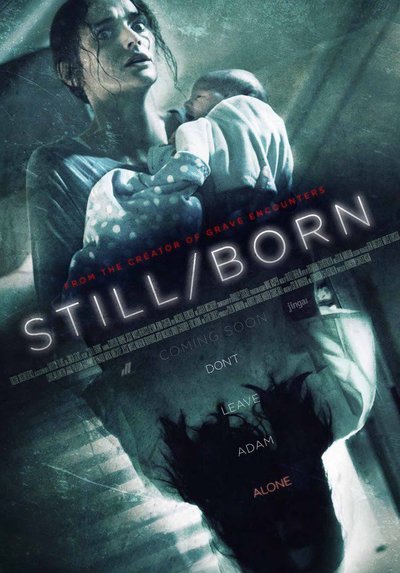