Stargirl is the most "manic pixie dream girl" who ever pixie-dreamgirl-ed. She's practically the prototype. She's the Alpha and Omega of the cliche, coined by critic Nathan Rabin in his review of 2005's "Elizabethtown." Stargirl dresses eccentrically, she carries around a ukulele, and her pet rat lives in her knapsack. She drifts above the rituals and pressures of high school, communing on a higher and much wiser plane. She exists in order to change the lives of others for the better. As seen through the eyes of Leo, a shy kid who only wants to fit in, she is nothing less than a Magical Creature. He believes she can actually make it rain. And maybe she can. There's something uncanny about Stargirl.

Whether or not you can tolerate all this manic pixie dream girl-ness will be a deciding factor in how you respond to "Stargirl," a film adaptation directed by Julia Hart of Jerry Spinelli's 2000 YA novel. Stargirl, played by "America's Got Talent" winner and self-created singer-songwriter phenom Grace VanderWaal, shows up at an Arizona high school from seemingly out of nowhere. She's a local girl, but nobody knows her because she was homeschooled. Where, in an isolation tank or a bomb shelter, a la Brendan Fraser in "Blast from the Past"? It's as though she's descended from the sky. Leo (Graham Verchere), who opens the film with a Voiceover narration giving us his backstory, sees Stargirl across a crowded football field, dressed like a kooky character from a 1970s movie played by Barbra Streisand or Diane Keaton. He falls instantly in love.

Stargirl doesn't care what other people think. At first, improbably, the whole high school falls in love with her, because if there's one thing we know about high school kids, it's how much they love nonconformity. When she serenades kids in the cafeteria with her ukulele, they are charmed. No one is ever mean to her. Stargirl becomes the "good luck charm" of the school. Her mere presence at football games helps the hopeless team start winning games. She is asked by the cheerleaders to join their squad. She does. She is the hero of the school! She helps Leo come out of his shell. She also has a kick-ass music collection—on vinyl, of course. Leo is enthralled. Stargirl picks him out of the crowd, falls in love with him, teaches him all kinds of things about himself. Everything is so easy. What is appealing about Leo to Stargirl? It’s clear what she brings to the table, but what does he? I wrote in my notebook: "Where's the conflict?"

Stargirl came out 20 years ago, winning almost every award it is possible to win. Fans loved the book so much, Spinelli followed up with a sequel (Love, Stargirl), even though the ending of the first book had been appropriately ambiguous. Stargirl shares some similarities with Jeffrey Eugenides' 1993 novel The Virgin Suicides, in that the girl is seen totally from an outside perspective. What the girl (or girls) come to represent to the male narrators is what matters. It can be an interesting device, although out of style now. What the device does is highlight the feeling that we can't really know another person, we can't know what goes on behind closed doors.

But this can be very frustrating cinematically, if not handled well. VanderWaal is a compelling figure in her YouTube videos and in any clips you might find of her singing live. She really is playing that ukulele! But she's opaque to the extreme here, and doesn't ignite the character at all. She doesn't have the skill as an actress to give us a sense that Stargirl has an inner life. When she jumps around on the football field, it seems incomprehensible that this magical dreamy girl would get so into it. She hasn't helped us make sense of her. During the cheers, she sings right at the camera, like it's an "America's Got Talent" audition. This was clearly a specific choice, but stopping the film in its tracks for what is essentially a music video doesn't help us find an entryway into the story, or into her.

Verchere plays even more of a cipher. Leo's "arc" doesn't make much sense: he falls in love with her eccentricity but then at a random point wants her to "be normal." (In the book, this change-up makes much more sense, as does the moment when the school turns on her, shunning her. This is handled in a sloppy way here, so much so that we aren’t even sure what happened at first.) Giancarlo Esposito adds some gravitas as a guy who lives out in the desert, digging up dinosaur bones, always ready to talk to the kids who wander out there to visit him. He exists to counsel Leo.

Director Julia Hart has a great feel for landscapes, for light. The look of "Stargirl" has a lot in common with the look of Hart's "Fast Color": similar sweeps of desert landscapes, romantic twilight skies, a sense of space beyond the frame. So far, my favorite of Hart's films remains the undersung "Miss Stevens" (2016), starring Lily Rabe as a drama teacher chaperoning a Drama Club trip (one of the students is Timothée Chalamet). Miss Stevens could have been conceived as "quirky" or a "kook," but in Rabe's hands, she is human, with all the flaws and mistakes that that implies. In "Stargirl" Hart brings her sensibility to bear, and the film looks wonderful. Hart wrote both "Miss Stevens" and "Fast Color" with her husband Jordan Horowitz. In "Stargirl," she deals with extant material for the first time, and she does what she can with it, but it's not enough.

The best thing about "Stargirl" is that Big Star's yearning ode to adolescence "Thirteen" is played in its entirety not once, but twice. If "Stargirl" introduces a new generation to the wonder that is Big Star, it will have done more than enough. 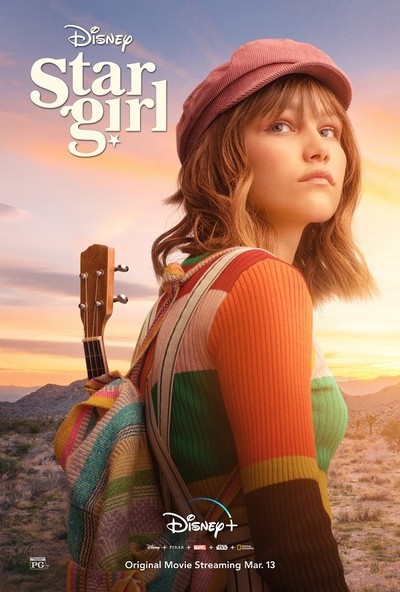