2016's "Miss Stevens," starring Lily Rabe and Timothée Chalamet, came and went without too much commentary, although it got generally good reviews. Movies sometimes get lost in the glut of what is horribly referred to as "content." "Miss Stevens" deserved more attention. It was such an eccentric film, funny and smart, with Lily Rabe giving one of my favorite performances of the year as the title character. Directed by Julia Hart, and co-written by Hart and Jordan Horowitz, "Miss Stevens" is ripe for discovery. "Fast Color," the next collaboration from this husband-and-wife team, is far more ambitious, including dystopian-sci-fi elements, and held together by two very strong performances from Gugu Mbatha-Raw and Lorraine Toussaint.

"Fast Color" takes place in the near-ish future, when water is so scarce it's become the currency of the realm. The American West, as envisioned by Hart, her astonishing production designer Gae S. Buckley and cinematographer Michael Fimognari, is a near-empty wasteland, sparsely populated with roadside bars and diners, empty storefronts, lonely houses beneath a gigantic sky. Ruth (Gugu Mbatha-Raw) is first seen escaping from a warehouse and fleeing into the night. Making her way across the desert, hitching rides, Ruth has secrets. People are looking for her, tracking her movements. People from the "government." A recovering addict, Ruth also has violent seizures which appear to cause earthquakes. She's so accustomed to this "power" that when she feels a seizure coming on, she calls the motel's front desk and warns them to take cover. Such a power might prove very useful in this parched New World. What if it could be harnessed, controlled?

The opening sequences of the movie are gripping and mysterious, as Ruth—tormented by flashbacks to happier times—tries to get home to her mother Bo (Lorraine Toussaint) and her daughter Lila (Saniyya Sidney), whom Bo has raised, since Ruth had been so wild. Hart takes her time establishing the backstory, allowing space for questions and confusion. Nothing is handed to us. People don't sit around explaining themselves to one another, and these characters don't either. Some of this leads to unnecessary confusion, but confusion is sometimes preferable to exposition underlined ad nauseam. Bo is first seen smoking a cigarette out on the porch of the family home, Nina Simone's "New World Coming" drifting out of the open windows. Slowly, the cigarette dissolves into shimmering dust swirls, hovering before Bo's eyes, before swirling back into its original form. This is the first inkling that Ruth's apocalyptic seizures may not be some weird individual "power," but something inherited and passed on. Lila, a young child who barely knows her mother, has a mechanical mind, and looks longingly at Ruth's battered pickup truck, aching to get under the hood. Lila's powers are wild and undeveloped. What starts as a wary family reunion, filled with bristling tension, transforms into an event far more urgent, with heavy-duty implications for all three of them.

How this plays out is not as important as "Fast Color"'s devotion to the rhythms of life in this one family, grounding us in their dynamic, even as events become more and more supernatural. There's one beautiful stationary shot of the kitchen, with the three characters moving in and out of the frame, getting their breakfast at staggered intervals, with no dialogue. Ruth is still almost feral, fearful of hurting someone when a seizure comes on. So she camps out in the barn, a stark white structure at night, with orange lamplight gleaming into the midnight-blue, stars exploding in the sky above, a sort of Thomas Kinkade filtered through a dystopian-glamorous lens. These moments provide texture and background, atmosphere and specificity.

Mbatha-Raw has a frayed-nerve intensity as Ruth, flinging her body away from approaching threat, charging down an empty road clutching a gas can, or running across the desert from someone in pursuit. She's gloriously physical in "Fast Color" but there's something jagged about it, as though her body is not entirely under her control. Ruth is like a bucking wild horse, beautiful but dangerous. Toussaint is one of the busiest character actresses around, working steadily for decades now, a familiar face from countless television series and films. Here, Toussaint has a role she can really stretch out in. Mbatha-Raw and Toussaint's scenes together are the heart of the film.

Hart undercuts the expected "superhero" element of the story, up until and including the final sequence. She's more interested in issues of power and creativity, more specifically women's power and creativity. Power is creative, but—as Ruth knows, as Bo knows—it can be destructive too. Power comes with a price tag. Bo has paid the price. Ruth has too. Can Lila be protected from having to pay the same price? Threaded through with interesting thoughts about matriarchy, climate change and generational trauma, "Fast Color" tries to do a little too much, and there are maybe one too many things shoehorned in, but Hart wisely keeps the focus intimate, staying close to the characters. What interests her is Ruth, Bo, and Lila. By the end, you feel you've gotten to know these people. You care about what happens to them. 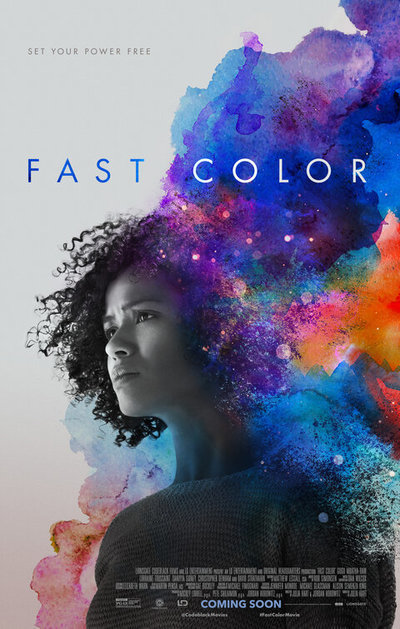 Rated PG-13 for a scene of violence and brief strong language.