A low-key and intelligent character study, “Miss Stevens” doesn’t escape from its indie-film commonplaces often enough to become really distinctive, but it has enough conscientiousness about its people that it doesn’t let the commonplaces fester into movie-sinking clichés. Directed by Julia Hart (who scripted 2014’s woman-centered Civil-War-set drama “The Keeping Room”) from a screenplay she co-wrote with Jordan Horowitz, it’s an offhand tribute to teaching­—its titular protagonist, played by Lily Rabe, is a high-school English teacher of obvious sensitivity, integrity and faith in her calling. She’s just having a tough time with, you know, life, and this picture works to capture that in a purposeful way.

The movie begins with the slight, attractive Rabe seated in a theater, reluctant to leave after the lights have gone up. We find out what’s there for her, or rather what’s not there, later on. Hart leaps headlong into Miss Stevens' weekend mission: to drive three students to an off-campus drama competition, where the kids will deliver monologues and perhaps bring home prizes that will get their school some arts funding. The kids are: the smart and slightly stuck-up Margot (Lili Reinhart) who on first impression seems to have a little Tracy Flick in her; the openly-gay but not overtly theatrical about it Sam (Anthony Quintal) and the troubled but also of course meteorically talented Billy (Timothée Chalamet). The road trip gets off to a rocky start as Margot criticizes Miss Stevens’ taste in driving tunes, terming the stuff “dad music.” Billy digs it, and yes, this is one of those movies in which the characters bicker about a well-known pop tune and the filmmakers let you know where their loyalties lie by squelching the argument and letting the “good part” of said tune play out at full volume on the soundtrack. I won’t spoil the song for you but it’s not a favorite of mine.

By showing his affinity for Miss Stevens early on, Billy, who’s on meds and also is obliged to take a makeup exam some time over the weekend, first stakes his imaginary claim on her emotions. He figures they are two lonely people who can help each other, and Miss Stevens’ possibly unwise confession of a recent emotional episode eggs him on—as does his unannounced decision to get off those aforementioned meds. Much is made in contemporary art assessment of a creator’s ostensible attitude toward his or her characters; speculation on this topic is often irrelevant and/or stupid, but this movie makes it plain that it truly likes its characters. One way it does so is in its disinclination to get them into scrapes of any sort that are too uncomfortable or grotesque (this is arguably a more realistic approach as well, some might say). All of which is to say that while Miss Stevens (Rachel to her non-students) does make some bad decisions (such as hooking up with a married male teacher played by Rob Huebel, whose thirst for portraying schlubby cads seems unlikely to ever be slaked), she insists on treating Bill as her student, and working things out with him that way.

The film moves from scene to scene with a fluid ease, and the acting is consistently winning and credible without ever being showy. While the movie’s unprepossessing manner can’t be said to backfire, exactly, its moments of wit and observation aren’t sufficiently startling to lift it out of engaging amiability. Recommended to teachers who want a “this is what it’s all about” smile or two. 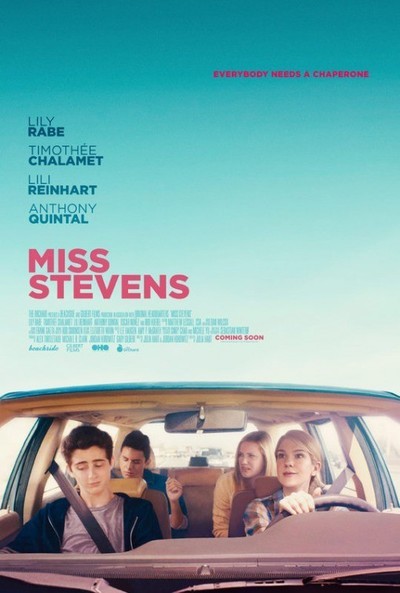